Titans of Troy: Don't Bet (On) The Farm

We list the top stars of USC Athletics this week.

Share All sharing options for: Titans of Troy: Don't Bet (On) The Farm

Well, that was quite a Weekender, wasn't it?

It was a tough, sloppy, yet glorious win for the Trojans, and many players on the team carved their names into program lore with their performances in Palo Alto.

That's why now's the time to introduce Titans of Troy, our new weekly column that will list the top five Trojan athletes/units each week; and this list won't just cover USC football, but all USC athletics.

This week, of course, will be dominated by football, but expect members of the water polo, volleyball, and soccer teams to get honors here in the coming weeks as those teams have games scheduled against top opponents.

The Vavic Dynasty resumed this weekend as USC began its campaign for a seventh straight water polo national championship. With all-time leading scorer Nikola Vavic now an alumnus, the Greek senior Kostas Genidounias stepped up as the new leader and scored 15 goals in four matches this weekend, including two against last year's national championship opponent, Pacific.

Boy, those coaches Pat Haden hired are off to a great start, aren't they? No. 17 USC women's soccer already has a 4-0-1 record and an upset of No. 9 Notre Dame on their resume under new coach Keidane McAlpine. This week, SC drubbed UC Riverside 8-1, with Jamie Fink and Alex Quincey each scoring three goals. It's the first time in program history that two players have scored hat tricks in one game.

One of the many reasons why Leonard Williams is on All-American watch is because he is a master at playing hurt. After playing "at 70 percent" much of last year, he made 11 tackles and a sack Saturday despite nursing a sprained ankle. That performance earned him conference honors and a nomination for ESPN's player of the week vote. Good luck to any offensive guard assigned to block him once his foot is fixed.

Yep. Andre Heidari did it again, and this time it was the longest FG of his career. It's already a big moment for a kicker if he can score in the clutch against a top opponent. What happens when he repeats the feat? He gets a killer nickname.

And before we get to #1, here are some honorable mentions:

Su'a Cravens and Adoree' Jackson - For all the talk of Stanford's struggles in the red zone, the TD-stopping deflections by these two CBs can't be ignored. Cravens' tip almost turned into a pick-six.

Taylor Whittingham - USC volleyball's new libero has some big shoes to fill, replacing four-time All-American Natalie Hagglund. She's off to a good start, though, averaging 3.72 digs/set as SC goes 6-0 with big games against Texas A&M and Florida coming up.

The O-Line - Stanford's senior front seven gave them the roughest time possible, but this young unit leaves SC with new confidence. Viane Talamaivao's block was crucial for Buck Allen's biggest run. Damien Mama said that he never knew he could "play so physically," and Zach Banner celebrated by letting it wash all over him.

The Spirit of Troy - Stanford's band mocked them at halftime playing "Tribute To Troy" repeatedly. But Bartner and his kids laughed last and loudest, playing "All Right Now" on full blast after Tavai's game-ending strip sack.

Pat Haden - Nearly everyone is finger wagging our Rhodes Scholar athletic director right now - including Larry Scott, who just fined him $25K - but make no mistake, Haden's approval rating among the alumni just shot through the roof, and just like after the racist allegations against Sark, the team has taken to Twitter to stand with their AD. 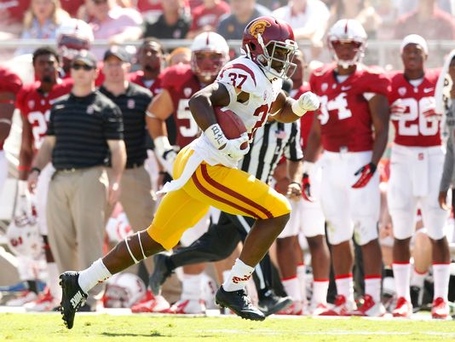 This time last year, this guy was fourth-string on the depth chart. This week, Buck Allen ran for a career-best 154 yards. He joins UCLA's Johnathan Franklin as the second RB to rack up 150 yards against a Stanford defense under David Shaw.

After lighting it up in the opener, Sarkisian played it safe this week, calling few deep pass plays to prevent turnovers and constant QB pressure. USC played the game on Stanford's terms, daring to break through a front seven that knows how to stop the power game. Of the 58 plays the USC offense ran, 23 were carries by Allen.

The running game that was non-existent in last year's game against Stanford became crucial this year, and now Buck Allen has established himself as one of the Pac-12's top rushers with a chance to get even more attention against a Boston College defense that allowed 303 yards against Pitt.