Aundrey Walker and USC O-Line Get Measure of Redemption

Share All sharing options for: Aundrey Walker and USC O-Line Get Measure of Redemption

Aundrey Walker walked out of the USC locker room Saturday night with a big smile stretching across his face. Nearly 10 months after he left the Los Angeles Memorial Coliseum field on the back of a cart, the senior offensive lineman was finally back on the field competing with his USC family.

"It felt good. I felt very happy out there just to play for the team, play for my brothers," Walker said after the Trojans' 35-10 thumping of Oregon State. "It feels good to score and it feels good to win a game."

It was a good night for not just Walker, but the entire offensive line. Following the loss at Boston College, the line received much criticism, particularly for being unable to run the football. After being much-maligned for the 20-yard rushing performance (on 29 carries) at BC, the young big bodies produced 200 yards on 48 yards and salted the game away on the ground in the second half.

"It's a chance for [offensive line] coach [Tim] Drevno to get back in that meeting room with that young o-line and give them a vote of confidence," head coach Steve Sarkisian said. "I was proud of those guys. They bounced back. They're getting better and improving."

USC struggled to move the ball for large swaths of the first half, but on its final four drives, the Trojans put the game away, running for 159 yards. They scored a pair of rushing touchdowns, punted once (when Justin Davi fumbled in the process of picking up a third-down conversion) and assured there would be no late comeback by running out the last 4:27 on the final drive.

In the first half, USC was fairly even with Oregon State in terms of time of possession, but in the second half, the Trojans dominated the stat. They held the ball for more than 10 minutes in each of the final two quarters.

"They did a great job," Tim Drevno said. "They prepared really well and you can just see that hard work really pays off when you put your mind to it. They did an outstanding job."

But it was actually the insertion of Aundrey Walker that really seemed to boost the offense. It wasn't until his first drive of the year that the offensive line got rolling. 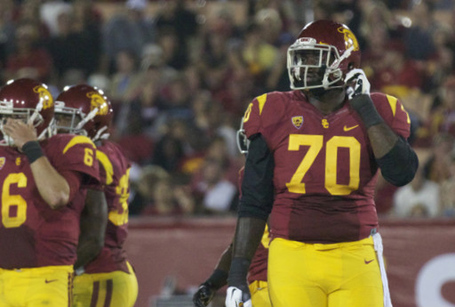 With 11:08 remaining in the second quarter, Walker checked in for his initial action this season. Up to that point on Saturday, USC had accumulated just 55 yards of total offense (16 coming on one Buck Allen run) and punted on all four drives.

But with Walker subbing in for Zach Banner at right tackle, the Trojans promptly went on an eight-play, 65-yard drive ending with a 16-yard Justin Davis touchdown reception to put USC ahead 14-10 -- a lead it did not relinquish.

Of the eight plays, Aundrey Walker had two really solid blocks, including a great seal that allowed Buck Allen to pick up nine yards and a first down on the second play of the drive. Walker also missed his block on the next play, partially resulting in a two-yard loss, but it was his only mishap of his first drive this season.

USC added to its lead on the final play before halftime when Cody Kessler hit Darreus Rogers on a 48-yard hail mary pass as time expired, but it was the only real semblance of first-half offense the Trojans had without Walker in the game.

Aundrey Walker returned to the game toward the end of the third quarter with USC still holding the same 21-10 lead. But with Walker showing his athletic ability getting to the second level on run plays and providing some strong pass blocking toward the end of the drive, USC was able to get into the end zone once more to push the lead to 28-10.

"I think he did a great job," Drevno said of Walker. "It was great to rotate him in there. It just makes Zach Banner stronger as the game goes on."

On the Trojans' final drive of the game, Walker and company, helped open up enough space for walk-on running back James Toland IV to pick up a pair of first downs that allowed USC to kill the final 4:27 on the clock.

Finishing the game and walking off the field was a fitting full-circle ending to Walker's tumultuous 10-month journey that began with him sitting on the back of a cart with his head down and his ankle broke. 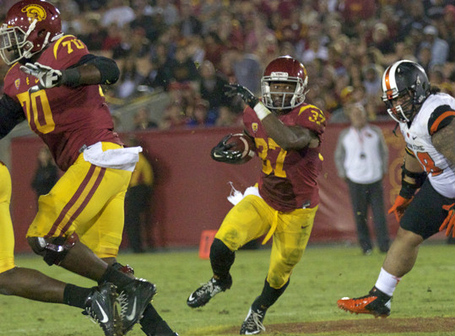 Walker opens up a hole for Allen. (Shotgun Spratling/Conquest Chronicles)

Against UCLA in last season's regular season finale, Aundrey Walker snapped his ankle. While simple bone breaks only typically take a 4-8 week recovery period, Walker's injury was more complex. He said he broke his fibula, tore ligaments in the ankle and had extra bone growth that stopped his mobility and made bending his ankle difficult.

That created a long road back.

By training camp, Walker had been medically cleared to play, but his mind wouldn't clear him. There was still pain and Walker continued to limp at times. He drew the ire of head coach Steve Sarkisian, who called him out in the media on multiple occasions.

Walker said he went into a cocoon, feeling sorry for himself and felt like he was in the doghouse with the new coaching staff.

After being listed as the primary backup at both tackle positions in Week 1, Walker was one of the few able-bodied players that didn't see the field against Fresno State. Sarkisian later said the senior lineman wasn't "in the right frame of mind." Going against the physical defensive line's of Stanford and Boston College, USC needed every offensive lineman on the roster to be available to go, yet Walker didn't participate in either game.

But the coaching staff stayed on him and kept pushing Walker. He said Sarkisian kept telling him to stop limping and continued to reinforce that he was healthy enough to contribute.

"It helped me a lot to hear him say, 'Stop limping. You got it. You're mentally strong. Let's go. Push through.' and stuff like that," Aundrey Walker said. "I look up to them guys (Sarkisian and Drevno). They're good coaches."

During practice last week, Walker turned the corner and Sarkisian hinted at him finally getting on the field. On Saturday, that time finally came and Walker made the most of it on all three of his drives.

"Tonight was a good night," Walker said. "It wasn't the best night, but I'm looking forward to getting better next week."

In the video above, listen to USC senior offensive lineman Aundrey Walker talk about getting his first playing time since breaking his ankle and tearing ligaments in last season's regular season finale. Walker rotated in at right tackle during the USC Trojans' 35-10 win over Oregon State.

Walker discussed the mental and physical obstacles he's had to overcome in order to get back on the field for USC. He also talks about the offensive line rotation and the differences for him coming off the bench after having been a multi-year starter.