How Trojans Can Bounce Back Against Oregon State

Share All sharing options for: How Trojans Can Bounce Back Against Oregon State

Fresh off a perfectly-timed bye, No. 18 USC looks get back to its winning ways at home against a hated opponent in the Oregon State Beavers.

The Trojans were riding high after beating Stanford Sept. 6, but headed into the bye week with their heads hung low after being upset on national television by the Boston College Eagles the following week.

The Eagles absolutely shredded USC's run defense, and the Trojans were victims of a "trap game" where the underdog Eagles clearly wanted it more. But a week off will do the Trojans some good, and that spells disaster for the Beavers who make their return to the Coliseum for the first time since 2009.

Both teams match up pretty evenly on paper, but the Trojans come into this matchup as 11-point favorites. And after a much-needed bye week, look for USC to come out of the gates with a bang.

The Trojans need to attack Oregon State fast and make a statement that they weren't at all rattled by their disappointing loss to Boston College. They should go deep on their first play from scrimmage and attack that stingy Beaver defense that is only giving up 18 points per game.

The Coliseum will be rocking early and often, and it's important for the Trojans to keep that momentum going as long as possible. Why not come out of the gates swinging? 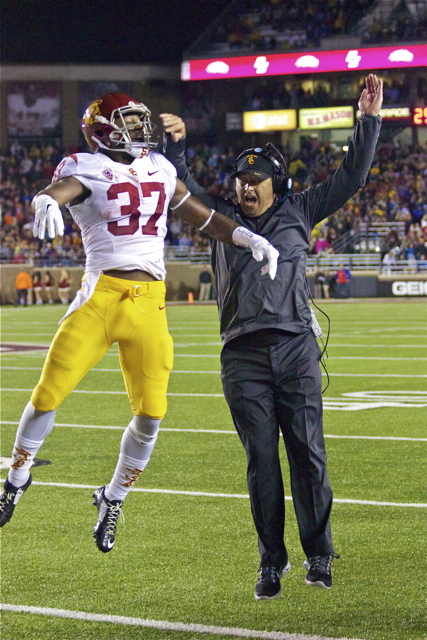 USC also needs to do improve when it comes to stopping the run. Boston College ran circles around the Trojans in Chestnut Hill, Mass., for 452 yards on the ground, and made them look more like the Jacksonville Jaguars.

Oregon State would be foolish not to try the same.

And don't be suckered by the Beavers' record either. Yes, they're 3-0, but they've beaten three lousy programs. The USC Trojans, on the other hand, upset a highly-ranked team on the road, and went toe-to-toe with one of the best rushing school's in the nation.

After this game, USC will host another quality opponent in No. 15 Arizona State. I can't see the Trojans slacking off against Oregon State before a showdown with the Sun Devils, a team that is more than capable of taking down No. 11 UCLA this weekend.

USC knows first hand what it's like to play in a place where all of the momentum favors the other side. Two weeks ago, it doomed them. But this week, the Trojans will regain that much-needed momentum in front of a crowd that has waited a month for their return.

With the extra week off and the momentum on their side, I can see the Trojans winning this one by three touchdowns.