Breaking Down the 2015 USC Football Schedule

Here's a breakdown of what lies ahead in the 2015 season for USC.

Share All sharing options for: Breaking Down the 2015 USC Football Schedule

The 2015 USC football schedule was released Tuesday, and it's never too early to take a look at what is in store for next season. The schedule includes seven home games, and some new opponents for the Trojans, both in and out of conference.

The 2015 season kicks off in the Coliseum with a first for the Trojans: a game against the Arkansas State Red Wolves. These two teams have never played against each other, but it can easily be said the Trojans will obtain a 1-0 series record after they play.

Following a visit from the Red Wolves, the Idaho Vandals come into South Central. USC holds an 8-0 record against the Vandals, which includes a 72-0 victory in 1929. The last time the two teams matched up was in 2007, and 2015 will continue the series trend of USC dominance.

After rolling over two weak teams, USC heads into back-to-back weeks against two of its toughest opponents.

The first real test for the 2015 Trojan squad will be when the Stanford Cardinal stroll down the coast. After two consecutive upsets, the Cardinal will be looking to bring USC's momentum to a screeching halt with a victory in Troy. From a triple-overtime Stanford victory in the Coliseum, to back-to-back USC upsets determined by a field goal, this game should be as exciting as ever.

Over the last several years, the two teams have gone back and forth. The Trojans owned the Cardinal during the Pete Carroll era, but Jim Harbaugh quickly took advantage of the sanction-damaged Trojans and turned the series around. However, the Trojans look like they are taking it back, and the 2015 matchup will show if they truly have done so.

A game against the Cardinal always takes a toll on the Trojans, both physically and mentally. Like this season, USC must go on the road following the Stanford game. This season showed the difficulty of traveling after Stanford when the Trojans got embarrassed at Boston College the very next game. In 2015, however, the next opponent is much better, the game has more important implications, and it's in an even more hostile environment -- playing Arizona State in Sun Devil Stadium.

Although the game has not been played yet, the Trojans should beat the 2013 South division champions this season (find out why here). However, when it's at Arizona State in 2015, anything can happen -- just look at last seasons 62-41 loss that led to Lane Kiffin's firing. Despite Taylor Kelly's absence, Tempe, Arizona will be one of the most important stops on the Trojans' journey to Santa Clara for the Pac-12 Championship.

USC will get a much-needed bye following two of its toughest and most important games of the year.

On a Thursday night, USC will take on the Washington Huskies at home. All the focus will be on Steve Sarkisian and his coaching staff as they take on their former team. Sarkisian and Justin Wilcox know the Huskies and their players well, which give them an edge over Washington coach Chris Peterson.

The Trojans will have two extra days to recover and prepare for a road trip to the middle of nowhere -- South Bend, Indiana. The Notre Dame-USC rivalry is one of the most exciting and longest in college football, dating back to 1926.

Many people consider it the greatest intersectional rivalry in all of college football. Under Pete Carroll, USC dominated the series with eight straight victories between 2002 and 2009. However, the Fighting Irish have caused some problems for the Trojans recently, as they have won three of the last four.

This game isn't as important as the Pac-12 matchups, but a victory in South Bend against their rival could give the Trojans a crucial midseason boost.

Following Notre Dame, USC takes on Utah and Cal the next two games. Both of these games should be unexciting wins for the Trojans, especially with the tougher opponent, Utah, being played in the Coliseum.

Next, the Trojans will take on the Arizona Wildcats at home. The last time Arizona took a trip to Troy, the Trojans had to fight off a late Wildcat surge in Ed Orgeron's debut as interim head coach. In the last couple of years, Arizona has been a mediocre Pac-12 team, but the Wildcats like to enjoy their annual upset -- just ask the 2013 Oregon Ducks or the 2012 USC Trojans. 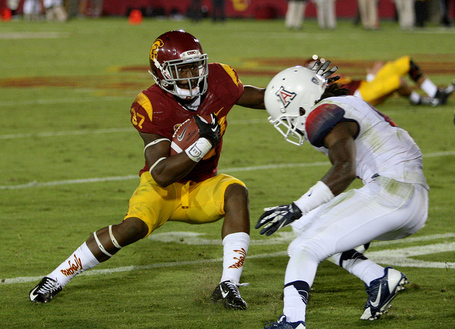 USC will have a slightly shorter practice week after hosting Arizona, as it will travel to Boulder to take on the Buffaloes in a rare Friday night lights game. Colorado has been a Pac-12 bottom feeder ever since it joined the conference in 2011, and despite the talented Sefo Liufau having more experience, the trend won't change in 2015.

Following what should be a fairly easy chunk of the schedule, the Trojans head into the final stretch of the season with games against two of its toughest opponents: Oregon and UCLA.

A trip to Eugene is the first of the two games. The last couple of seasons USC has had it easy, avoiding the mighty Ducks. Unfortunately for the Trojans, it's their turn next year. This game can be looked at in two ways: wide-eyed and fearful or with great optimism about the chance to walk through the tunnel of Autzen Stadium and reclaim the Pac-12 throne.

Whether they win or lose in Eugene, the Trojans will return home to prepare for the Crosstown Showdown. What was a joke of a rivalry for several years has become crucial for the Pac-12 South race.

Jim Mora had Lane Kiffin figured out, and the Bruins have taken the Victory Bell to Westwood two years in a row. But now with Sarkisian holding the reins, things may be a little different.

This year USC travels to play UCLA at the Rose Bowl, a stadium the Trojans can call home just as much as UCLA. We won't know how Sarkisian and Mora match up until November, but we do know it'll be a close one. In 2015, the Trojans get the Bruins at home, and UCLA will be without star quarterback Brett Hundley.

When the final whistle blows in Pasadena, the Trojans' 2015 regular season will come to an end, and USC fans will hopefully be booking their tickets to Santa Clara for the Pac-12 Conference Championship Game.

Interconference play is slightly easier in 2015, but the Pac-12 schedule is much more difficult than it is this season. USC swaps games against Oregon State and Washington State for Oregon and Washington, two tougher opponents.

My way-too-early prediction for 2015 is 9-3, with losses on the road at Arizona State, Notre Dame, and Oregon.