Farmer's time at USC has been plagued by injury, but he is now 100 percent healthy.

It took 1,374 days from his commitment on December 11, 2010, but on Saturday night, wide receiver George Farmer finally got his long overdue first touchdown as a USC Trojan. Farmer’s career has been well documented with disappointment and injury but for a few seconds during USC’s 37-31 loss to Boston College on Saturday, all the attention on him was completely positive.

With a little over six minutes left in the first quarter, Farmer found himself wide open on second-and-goal for his first career touchdown as quarterback Cody Kessler hit him right in the chest for an easy six-yard score. He finished the game with two catches for 16 yards.

"I knew it was coming my way. We have been practicing that play all week," Farmer said after the game. "I knew from the coverage and how they played, it was going to be a touchdown right there.

"Me and Cody kind of connected before the play, but other than that, I wish it could have helped us get this victory."

It was a long-awaited first touchdown.

George Farmer was the No. 2 wide receiver recruit in the nation coming out of Serra High School in the Class of 2011. He was supposed to be the best receiver out of the ridiculous Serra High School trio of Marqise Lee and Robert Woods.

While both Woods and Lee became All-Americans in 2011 and 2012, Farmer found himself on the bench and moved over to running back as former coach Lane Kiffin tried to find a way to display his athleticism while also coming up with the right fit for him. After Woods declared for the draft after the 2012 season, Farmer, back at the receiver positiion, saw that now would be his time to shine.

The Los Angeles native was having a fantastic spring practice in 2013 until April 4, when he tore the ACL and MCL in his left knee during a non-contact drill. His season was over before it could even start.

With a new coach and a new mindset this year, George Farmer set out to return during fall camp and has impressed.

Farmer opened the season with three catches for 20 yards in the victory against Fresno State followed by four catches for 36 yards against Stanford. Yes, those aren’t overly impressive numbers, but the fact he is on the field and 100 percent healthy is what’s important. With nine catches on the season, he has almost doubled his career receptions (5) entering this season.

Steve Sarkisian has raved about Farmer's production in practices and Fall Camp. He also has tried to find ways to get the ball in Farmer's hands, including a reverse on USC's first play from scrimmage against Boston College. 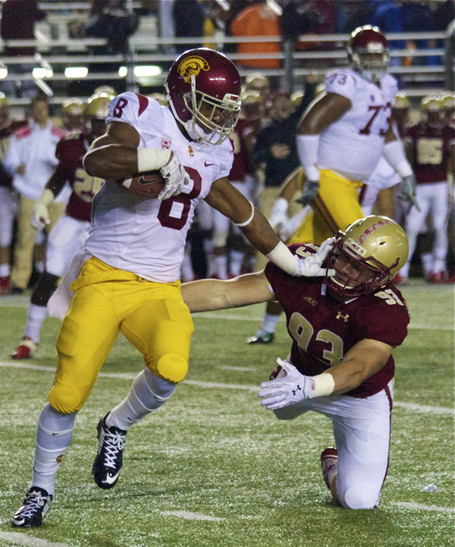 The Eagles sniffed the play out and even though George Farmer eluded the first defender with a mean stiff arm, BC pulled him down for a two-yard loss. But the play showed USC's intentions to get the ball in one of its premier playmakers hands.

With Cody Kessler spreading the ball out, one can expect Farmer to reach the end zone multiple times this season and maybe even become the next Serra HS receiver to make it to the NFL.