Share All sharing options for: USC's Loss to Boston College Not as Shocking as You Might Think

A week after picking up a top-15 win against Stanford, the No. 9 USC Trojans came unraveled at the seams at the hands of the Boston College Eagles Saturday night in Chestnut Hill, Mass.

The Trojans, who were riding as high as anybody else in the nation after the victory over the Cardinal, ran into the trap that was the Boston College Eagles. But given the circumstances, USC's loss to a middle-of-the-road ACC opponent shouldn't be that confusing of a concept to grasp.

The Trojans took control by jumping out to a 10-0 lead in the first quarter, and it seemed as if the Eagles were just another "cupcake" opponent scheduled for the powerhouse teams, so they could chalk another "W" in the win column.

Granted, Boston College wasn't Wofford or Sacramento State, but the Eagles did look rather dreadful against a very mediocre Pittsburgh team the previous week.

All looked right for USC after the first 15 minutes, then the second quarter happened.

The Eagles ran the table (pun very much intended) and after taking the lead shortly before halftime, all of Troy found themselves asking, "what the hell is going on?"

Things didn't get any easier for USC after Boston College tacked on the first 10 points of the second half, extending its lead to 13 points by the fourth quarter. At that point, it looked even more unlikely the Trojans would win the game, let alone cover the 17-point spread.

The hopes of a win was all for not as the Eagles very impressively beat USC 37-31. 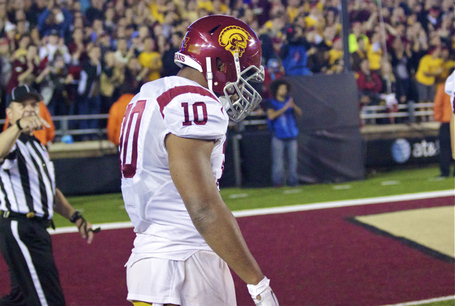 The question that fittingly addresses the giant elephant in the room shouldn't be, "How did this happen?" But more so, "How did we not see this coming?"

You see, these types of situations are all too common, and USC was just a victim of very bad circumstances.

Much of it had to do with the red bandana celebration honoring Boston College alum Welles Crowther, who tragically lost his life while assisting others in the Sept. 11 attacks.

USC was also coming off of an emotional win over its in-state rival Stanford, and it looked as if the Eagles viewed this game as the Trojans viewed theirs the week before.

The Trojans also had to travel more than 3,000 miles across the country for this one, a difficult spot for any team fresh off an impressive victory. They're called "trap games" for a reason.

I thought this game would be much closer than most had anticipated, because some teams, no matter how talented they are, are just caught in a bad spot. This was one of them.

Boston College ran circles around USC's defense, finishing with 452 yards on the ground. Think about that stat for a second. If you were to combine USC's rushing and passing yards and add 100 to that, you still wouldn't have as many yards as Boston College had on the ground.

This was a bad loss for USC, but it isn't the end of the world.

The Trojans return home for a pair of conference games, including a showdown with No. 15 Arizona State on Oct. 4. And with several other top-25 teams losing this weekend, USC isn't in the worst company at this stage of the season.

The Trojans will regroup from this loss, and they'll learn from it. It's not like they didn't want to win the game. Boston College just wanted to win it more.