The Eagles playing at home could hamper the Trojans' defense.

After handing the Boston College Eagles a 28-point shellacking in Los Angeles last season, the USC Trojans head to the Northeast with the hopes of having a repeat performance this season.

Helped in part by the rebirth of quarterback Cody Kessler and the momentum he generated in his first start after officially winning the quarterback battle, the USC defense easily dominated the Eagles and held them to to just 184 total yards and a stingy seven points.

USC overpowered the Eagles in every way imaginable.

Here are some key stats from USC's 35-7 victory last season, via espn.com. 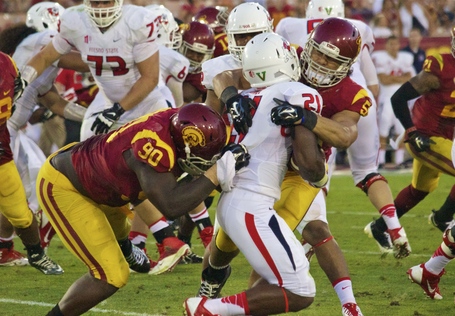 What's even more impressive about USC's defensive performance from last year's win was that it completely shut down the Eagles' offense without forcing a single turnover.

Boston College hardly generated any type of scoring threat throughout the game. Even Heisman candidate Andre Williams couldn't find any space against the Trojans, finishing with 38 yards on 17 carries for a paltry 2.2 yards-per-carry average. The Eagles didn't even find pay dirt until the fourth quarter when running back Tyler Rouse took a 29-yard run to the house to give them their lone score of the game.

So, the question remains, can the Trojans repeat that performance on Saturday in Chestnut Hill, Mass.?

USC's defense is loaded with playmakers on the defensive side of the ball, including star defensive end Leonard Williams. The Trojans' defense passed several challenges last week against Stanford, including holding the Cardinal to just 10 points despite the trees living in USC territory the entire game.

Stanford had every opportunity to put multiple points on the board, but the resilient Trojan defense, a staple throughout the program's history, rose to the challenge and was the key in why USC walked out of Palo Alto with a 13-10 win.

The Trojans are 14th in the nation in points per game allowed at just 11.5. They should do well against a team that only managed 20 points in its home opener last week.

Led by run-first head coach Steve Addazio, the Eagles were a force to be reckoned with at home last season. Boston College averaged 401.5 yards and nearly 34 points per game at home in 2013. Its only loss was a 48-34 loss to the eventual-national champion Florida State Seminoles.

USC should have its hands full with Eagles quarterback Tyler Murphy, who is averaging 7.2 yards every time he runs the football.

The Trojans will also be without senior linebacker Hayes Pullard for the first half of Saturday's game after he was ejected for targeting against Stanford. Look for the Eagles to try and exploit USC's defense with his absence for the first 30 minutes.