Things That Could Hurt USC Against Boston College

Share All sharing options for: Things That Could Hurt USC Against Boston College

Fresh off a thrilling road victory over the Stanford Cardinal, the USC Trojans will leave the state of California for the first time this season for a non-conference matchup against the Boston College Eagles.

The Trojans look and feel like a much-improved team with Steve Sarkisian (or anybody not named Lane Kiffin) as their head coach, but let's not discount the fact the season is still very young.

USC opened the week as a 20-point favorite, but there are a couple facets that could make this game closer than the oddsmakers think.

The Eagles are averaging 240 rushing yards per game, good enough for 25th-best in the nation. The running attack is Boston College's bread and butter, and look for the Eagles to continue to pound the ball against the Trojans.

Eagles quarterback Tyler Murphy is averaging 7.2 yards per carry this season, and the Trojans are sure to see their fair share of him running the ball since the Florida transfer has only thrown for 307 yards through two games.

USC has given up an average of 142.5 rushing yards per game through its first two games and has looked vulnerable at times. Boston College head coach Steve Addazio likes to execute a rushing-first attack, and Saturday's matchup shouldn't be any different. 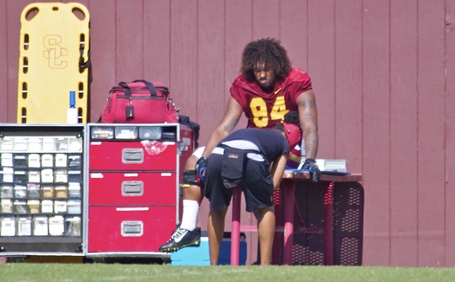 There's nothing worse for a team coming off a huge win than to take on a team it's expected to blow out the week after.

The Trojans just picked up a huge top 15 win against an in-state rival, and now must travel more than 3,000 miles across the country to take on a relatively unknown opponent.

For the Trojans, they must stick to the same game plan they've used these first two games and not slack off against a "cupcake" non-conference opponent.

After suffering a 10-point loss to Pittsburgh last week, look for the Eagles to give their all against the Trojans as they try to make some noise in the ACC.

USC is not going to lose this game. Boston College might hang around a bit to keep things interesting, but USC is much-too talented and is a far-better team.

It's possible the Eagles could hold the Trojans to a 17-point victory, but Sarkisian understands the dynamic of a "trap game," and he'll be sure his team isn't lackadaisical a week before USC returns to the Coliseum.