Andrew McKagan shares his observations of USC's 52-13 shellacking of the Bulldogs.

Share All sharing options for: Observations From USC's Dominating Victory Over Fresno State

The first game of the Steve Sarkisian era for USC was a rousing success. I will never forget the moment after the first quarter ended, USC ahead 21-0, and the standing ovation the crowd gave for the Trojan football program.

There was the feeling that this celebration wasn't just about that day, or the fact that USC was ahead on the scoreboard, but rather for the new life and hope brought back to USC with Sarkisian. Gone are the days of the sanctions, Lane Kiffin, and mediocrity.

With Sarkisian has come new life for the USC football team and the entire student body, as we now have something to look forward to every Saturday without reserve or caveat.

That being said, there were both good and bad aspects of Saturday's game that I saw from my seat around the 30-yard line. Here are my observations:

Overall, Saturday was very encouraging for the Trojans. The talent level of this football team is superb, and the offensive system is cutting-edge. This weekend against Stanford will be one of the toughest, if not the toughest, tests for this team at the line of scrimmage on both sides of the ball. It'll be strength vs. strength. We'll see if USC is ready for national conversation yet. 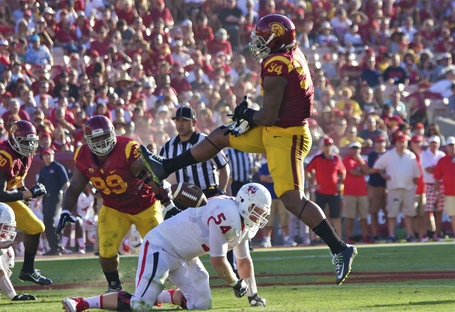