There were some surprises when USC released its Fresno State depth chart.

Share All sharing options for: 5 Takeaways from USC's First Depth Chart of 2014 Season

USC is six days away from opening the 2014 season by hosting Fresno State at the LA Memorial Coliseum. The USC athletic department released the Game Notes for the USC football matchup with the Bulldogs.

Included in this edition of the weekly Game Notes that precede each week's game is the very first iteration of a USC depth chart for the 2014 college football season. 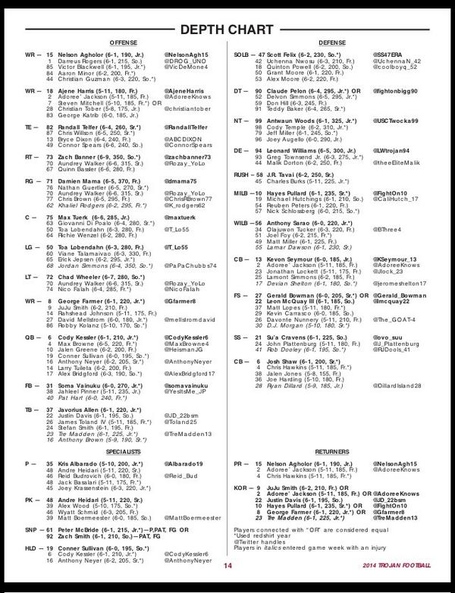 There are plenty of things to decipher from USC's first depth chart of the season, but here are the five things that stood out the most:

For the first time since World War II, which is as far back as the records go, a pair of true freshmen offensive linemen are slated to start the season opener. Toa Lobendahn and Damien Mama are listed as the respective starters at the guard positions. And they could become only the fourth and fifth true freshman starters on the offensive line, joining Brad Budde (1976), Travis Claridge (1996) and Kris O'Dowd (2007).

Another true freshman is slated to line up at receiver for the Trojans' offense, but it isn't the five-star two-way studs Adoree' Jackson or JuJu Smith. Instead, it is Crenshaw High School product Ajene Harris, who has blossomed in the slot receiver role after playing quarterback in high school.

2. Bryce Dixon Not on the Two-Deep

High school All-American and the top tight end recruit in the nation, Bryce Dixon, was expected to have a large role in the Trojans offense after Jalen Cope-Fitzpatrick was ruled academically ineligible before the season began. While Dixon wasn't expected to unseat incumbent senior Randall Telfer, he has shown to be a difficult matchup issue at the tight end position thanks to his unique speed and athleticism combination.

However, on the depth chart, Bryce Dixon finds himself behind walk-on senior Chris Willson. Willson does have experience, having started a game and played significant minutes when Telfer and Xavier Grimble were injured last season, but no one expects him to stay in front of Dixon for long.

At the SAM outside linebacker position, freshman Uchenna Nwosu, who was a late addition to the USC Trojans' recruiting class, has really come on strong at the end of Fall Camp. Enough so that Nwosu has apparently jumped Quinton Powell at the position backing up Scott Felix.

It's also interesting that Scott Felix is listed at the SAM position rather than the rush end position where he has played a lot during Fall Camp. Don't be surprised if Felix and J.R. Tavai rotate at the rush end spot when safety Su'a Cravens comes down into the box in the "Dollar" position (and therefore eliminating the SAM role).

4. Aundrey Walker on Outside Looking In

If the depth chart holds through Saturday, Aundrey Walker will have now lost the left tackle, right tackle and right guard starting spots during his tenure at USC. Coming off a broken ankle suffered during the UCLA game last season, Walker is still working his way back to 100 percent and hasn't recovered his spot as the starting right guard.

That Walker isn't the starter isn't a shocker, but the fact that he is sitting behind both starter Damien Mama and former walk-on redshirt senior Nathan Guertler is quite surprising. However, Walker could still see plenty of action against Fresno State in the offensive line rotation that Steve Sarkisian and offensive line coach Tim Drevno want to establish. Besides being listed as the No. 3 right guard, Aundrey Walker is also listed as the backup at both the left tackle and the right tackle positions.

Coming out of high school, George Farmer was expected to be an immediate star. He was the top wide receiver recruit in the nation, the top California recruit and one of the top five recruits in the nation. That was the Class of 2011. Three years later, Farmer is still waiting to make an impact for the Trojans. He is fully recovered from a torn ACL last season and is now listed as the starter across from preseason All-American Nelson Agholor.

Several players will likely see time at the receiver position, especially when USC gets up early on Fresno State, but Farmer is finally in the starting lineup and has shown a lot of positives in Fall Camp.

**Comment below and let us know what other things stand out to you in the depth chart and who you are exciting to see play in this Saturday's opener.