USC is building confidence for next week's season opener.

Taking a look back one year from this point and it would painfully come to mind that the Trojans massively struggled in their second Fall Camp scrimmage, barely able to move the football against a hard working but vastly overmatched scout team defense that smelled eerily like the Washington State blunder.

After a somewhat lackluster opening scrimmage this year, where many players admitted to being a tad bit nervous playing an intense scrimmage in the Coliseum for the first time since the Spring Game, the extra week led to massive improvements across the board. The performance was promising to watch and rather impressive given USC's lack of a true deep threat during the scrimmage since Nelson Agholor was mostly held out on offense.

From the very first drive, which resulted in a quick touchdown, the Trojans matched the physicality from the defense resulting in heavy-hitting, exciting but also fundamentally sound drives from the first-team offense. Last night, we provided a QUICK RECAP with photos, injury updates and some observations.

USC was the best in the Pac-12 last season in red zone defense, but that was not the case during Monday night's scrimmage. The offense loaded up the box with two-TE sets along with Soma Vainuku clearing space on the inside, leading to multiple rushing touchdowns from Tre Madden and Buck Allen. 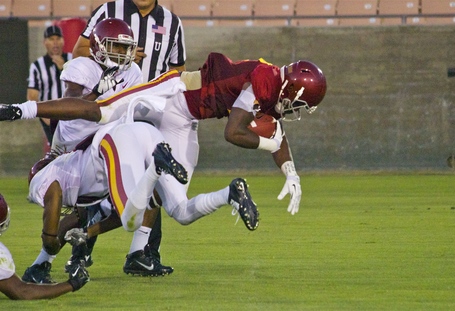 "I was encouraged by the fact that our ones really dominated the twos," said Sarkisian, following the two-hour scrimmage on Monday night. "Not that our twos aren't good players, but I thought that the execution on both sides from the ones was really good when it was ones versus the twos."

One thing that did catch our eye in terms of execution was that USC worked heavily behind Damien Mama as a pulling guard to create large holes to the left side, the preferred half of the field to attack opposing defenses.

The Trojans relied heavily on shotgun snap, quick read-option handoffs right up the middle for a majority of their scoring plays. As the defense began to make adjustments by overloading the A-gaps, the offense countered by giving Soma Vainuku some powerful carries towards the outside.

Don't completely worry, the defense was solid in many short-yardage situations. One of the main reasons for that success was Claude Pelon, who put together an inspired (and quite vocal) performance on the first-team defensive line.

Right from the very first whistle, players came out and started tackling, something you really want to see from players. That mentality was best represented by rush end linebacker Scott Felix, who continued his physical play at the scrimmage. In a night completely live from the very start, guys were flying around the football.

"I felt like we made huge strides," quarterback Cody Kessler said. "From where we were last time to now, scrimmage-wise, we did a great job."

While the tackling slowly died off during the later periods, players were physically swarming to the ball and the defense responded to the challenge of tackling this running back corps.

Give credit to guys like safety Gerald Bowman for sniffing out bubble screens with fierce aggression, Charles Burks for creating solid pass rush off the edge with the second team, and even Delvon Simmons for battling Toa Lobendahn and Nathan Guertler each and every rep on the field.

Plus Matt Lopes continues to deliver the wood as a strong second-team safety. Lopes came away with the only turnover of the scrimmage, picking off an errant Max Browne pass that sailed well over the intended target.

Tempo was on full display once again, mostly after first-down conversions. Sticking to a relatively quick attack of about 15-20 seconds, USC was all over the field keeping the opposing defense and the training referees on high alert.

The offense was buried in the sideline looking for offensive play sheets (rotating between a variety of symbols and logos) while right on the line of scrimmage. During one segment, the offense was running plays so quick that backup offensive lineman Erick Jepsen had to play with his shoe only halfway on his foot after being stepped on because he didn't have the time to untie and re-tie it in between plays. 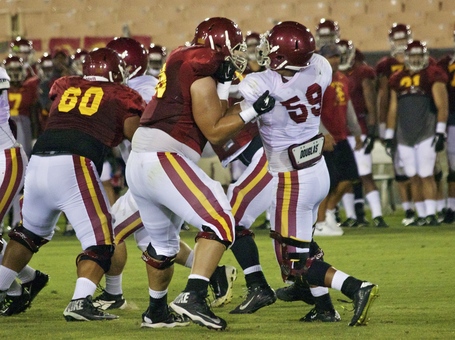 The Trojans will look to build off that momentum starting on Wednesday as the team fully installs game-week preparation for the Fresno State Bulldogs.

We mentioned earlier in training camp that USC's special teams could really be cooking this season, and the emphasis on improving this aspect of the game really came into fruition. The Trojans worked through kickoff, kick return, and punt return in between scrimmage segments and showed flashes of glory thanks to strong individual performances.

Adoree' Jackson kicked things off in grand fashion, bolting through a swarm of scout team defenders wearing those patented green jerseys that just confuse everyone on the field. Nothing was left in doubt once Jackson touched the ball, dashing through defenders (which admittedly slowed up from making full contact and from attempting a potential horse collar tackle on the outside that would have saved the touchdown) but the run was still impressive.

Fellow standout freshman JuJu Smith made his presence felt by following the first-team kick return straight to the house, galloping down the far sideline in a manner similar to the Marqise Lee run against Utah from last season. Combine that with the great holding on field goals from back-up quarterback Conner Sullivan and Andre Heidari has felt more comfortable in his game, allowing him to nail some clutch field goals in practice.

5. Offensive Line Depth In More Ways Than One

It started as a huge concern heading into camp, but USC may have just figured out the offensive line situation after all. Following the 100-play scrimmage, head coach Steve Sarkisian mentioned that the offensive line is much more deep than many folks give them credit for.

The biggest reason for optimism centers around three stud freshman loading up the middle of the offensive line: Viane Talamaivao, Damien Mama and Toa Lobendahn.

USC's first-team line was put into minor question during the scrimmage as Khaliel Rodgers ended his night early after suffering an apparent knee injury that Sarkisian said wasn't expected to be serious. That led way to increased reps for Aundrey Walker (offensive tackle), Nathan Guertler (offensive guard) and Mama (offensive guard) throughout the night.

Given the solid play from Chad Wheeler and Zach Banner at the respective tackle spots, along with veteran Max Tuerk holding down the fort at center, freshman Talamaivao and Lobendahn absorbed a bulk of the reps at guard.

Offensive line coach Tim Drevno has mentioned that he's looking for eight players to emerge for a solid rotation, and the versatility of USC's young guns creates an opening to where the coaching staff could rotate three-to-four players up the middle -- something Sarkisian said would be likely if the freshmen continue to develop. Known for his acclaimed work with the 49ers, especially veteran G/C Alex Boone, Drevno knows a thing or two about turning versatile prospects into massive hogs in the run-blocking game.

Bonus: Players Back In The Fold

While many players backed out of practice, it was great to see All-American defensive lineman Leonard Williams and long-time running mate Antwaun Woods return to the first-team defense during the scrimmage. Though the coaching staff limited their number of reps, both players were near full form and looked visibly fired up about returning to the gridiron for the full-speed scrimmage.

"It was just great taking some good reps," Woods said. "We (the entire defense) pride ourselves on coming out there with great energy and just keep taking it day by day."

After making an impressive tackle, Williams was dancing all over the field in shear joy back making impact plays. Wearing a large brace on his left elbow, Antwaun Woods, the largest defensive lineman, clogged running lanes against USC's second-team offense and said afterwards he felt about 90% during practice and was excited about the physical play from his unit. 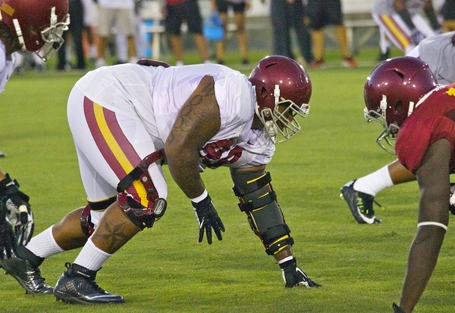 Antwaun Woods was back with an elbow brace. (Shotgun Spratling/Conquest Chronicles)

Adoree' Jackson, who missed most of last week, made some impressive tackles in the secondary, including a big one-on-one stuff of his dangerous freshman counterpart JuJu Smith in the open field. Jackson showed coaching staff some promise about his ability to play on both sides of the ball. His pure coverage skills may still be in question (he was called for pass interference on at least one occasion), but Jackson will certainly make an impact at the Coliseum right from the opening game.