The Trojans left battered, but showed some promise across the board.

Plenty of storylines could be covered from USC's first scrimmage, but some of the major talking points actually came from players lower on the depth chart that thrived in somewhat newfound opportunities.

Cody Kessler was solid, but not spectacular. Max Browne allowed his weapons to take over, and the overmatched scout-team defense put together an inspired performance. The special teams battery still seems to be a work in progress but the rapport between holder Conner Sullivan and kicker Andre Heidari showed promising flashes.

In a combination of traditional practice, game-like special teams looks and some red-zone moments, the Trojans exemplified very basic looks on both sides of the ball. Last night, we provided you immediate thoughts on the Trojans' 98-play live scrimmage. Here are the five biggest contributors, moments and trends that took place on the Coliseum grass on Wednesday night.

Jonathan Lockett, John Plattenburg, Bryce Dixon, JuJu Smith, Uchenna Nwosu: Remember these names as time goes on this season because each could be game changers in the later portion of their USC careers...if not sooner.

Lockett was all over the defense, including breaking through a would-be screen block from Ajene Harris and crashing right in to stuff the passing attempt behind the line of scrimmage. 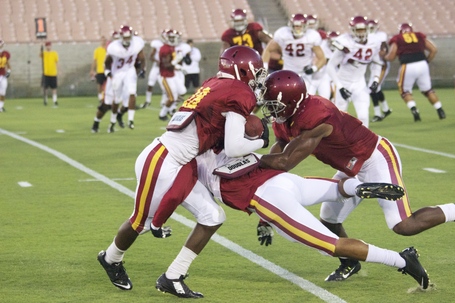 John Plattenburg was tested all evening long in the secondary and held his own against George Farmer and George Katrib (among others) all night long.

Bryce Dixon showcased those stick 'em hands as a promising pass-catching option, while JuJu Smith showed immense verticality and his physical nature on a touchdown reception, on a slant route from Cody Kessler. While head coach Steve Sarkisian said some of the freshman suffered from "freshmen-like moments," these guys all put together mostly solid outings.

Getting an opportunity to run with the starters, Uchenna Nwosu played quite well in run support all night long, even benefitting from great team defense for a solo sack.

After missing most of last season due to injury, Coach Sarkisian challenged Justin Davis to pick up the load offensively this offseason. Those rewards blossomed at the Coliseum, as Davis became a defensive nightmare catching passes, running with swift gallops into the secondary and powering forward for big first downs.

One area that will certainly help Davis' success would be running to the left side of USC's offensive line. The combination of Chad Wheeler and Toa Lobendahn had their way with the opposing defensive front all night, clearing massive holes for the rushing attack. No official stats were kept, but USC probably ran over 70-percent of their rushes to that side.

The Trojans were heavy on the inside zone game and the power running game, going right between the tackles. Running lanes opened up all night long, which definitely was benefitted by the absence of Leonard Williams and Antwaun Woods, and on Wednesday night the running back corps took advantage of their opportunities.

The play of walk-on secondary players isn't typically praised, but the combination of safety Matt Lopes and Elijah Steen made some eye-popping plays. Lopes collected at least five tackles on the night, including some jarring hits on impressive tailback Justin Davis. Known for his fiery yet joyfully competitive mentality, Lopes was all over the field cleaning up run plays and quick-hitting passes to the outside.

Elijah Steen, the six-foot, 190-pound safety from Orange Coast College, had some nice pass break ups deep down the field, saving the defense a possible touchdown against fellow walk-on Aaron Minor. One other walk-on worth mentioning was junior wide receiver Christian Tober, who continues to make strong catches on the outside proving his worth as a valuable second-team contributor in this fast-paced offense.

Damien Mama, Toa Lobendahn and Khaliel Rodgers (Papa Chubs), were all players that caught my eye during the scrimmage. Mama, one of the largest human beings you will ever meet, looked fluid pulling up and through the hole at the guard position on power running plays during both first and second team reps.

Rodgers looked healthy and active the entire night, which could be the best part of his entire outing, blowing up chip blocks to the next level while having the awareness to find linebackers and seal them off in certain run fits. The biggest contributor of the night, however, was C/LG Toa Lobendahn, who continues to showcase why he can be an immediate asset on the offensive line.

After assessing his entire offensive line, Sarkisian quickly praised the early-enrollee freshman who took snaps at both left guard with the first team and center with the second-team unit. "(Toa's) got the warrior mentality. He's a tough-minded guy, (he) never gripes. He's got the 'more you can do mentality' and he definitely shows up."

While a scrimmage presents an opportunity to battle it out in heavy competition against your friends, the somewhat prideful Trojans still lack an overall understanding of when and where to fire full-go out on the football field.

Classic example, after scoring a nice touchdown on a slant route across the middle, Victor Blackwell exchanged words with Devian Shelton, who had slipped and fallen right behind him, and put the ball on Shelton's chest. The refs saw the whole thing unfold and at least four different zebras tossed flags for excessive celebration/unsportsmanlike conduct.

Along with nearly double digit penalties, many of which came on false start or encroachment, the discipline in run defense was somewhat lacking from the first and second units. Trying to over pursue the ball carrier, Buck Allen, Justin Davis and Tre Madden all took advantage of solid cut-back lanes for added yardage.

There were also examples of great discipline by cornerbacks playing against the rush, kickers staying composed under pressure and quarterbacks not forcing throws into tight windows. In a night of mixed results, it was fairly evident the absence of Leonard Williams and Antwaun Woods really left some gaping holes in USC's defensive scheme.