USC enters the middle of their schedule playing three games they're heavily favored in. With two on the road, could the Trojans be the victim of an upset?

After heading full swing in to Pac-12 play against the conference's upper echelon, the Trojans slowly put on the brakes as they take on Colorado, Utah, and Washington State. However, they must do so carefully because the program's history has proven stretches with games that USC is heavily favored can cause the best of seasons to hydroplane and crash, ending a chance at the national title. Just ask the members of the 2003 team.

Mental toughness is key in these next few games for the Trojans. It'll be easy for the players to look ahead at the upcoming UCLA and Notre Dame games, but if any of these games are taken too lightly the Trojans could find themselves in a second half battle struggling to keep that loss column empty.

Colorado has the highest student section, and that's not because Folsom field sits at the third highest elevation in the NCAA. When USC played there last season, the Trojans got the kind of high that the Buffaloes wished they could get-a high score. The lethargic Buffaloes, on the other hand, got the type that only the Boulder atmosphere can provide, and the Colorado defense exemplified its effects astoundingly in their 47-29 loss.

Coach Mike MacIntyre's second year should be a sobering year for the Buffaloes. In his first year coaching Colorado, they improved in twenty-nine statistical categories and quadrupled the number in the previous year's win column. Colorado returns eight of their eleven starters on both sides of the ball, and retains a deep bench.

True freshman Sefo Liufau took reigns of the herd in game six, and quarterbacked the last eight games of the season. Although his numbers weren't great (1,779 yards, 10 touchdowns, and 8 interceptions), he's the programs most promising quarterback in the last decade. Eight games of experience under his belt combined with spring play should lead to tremendous improvement for the young talent. Liufau has the luxury of six of his seven receivers returning for 2014, however, he will lose the man who brought in 561 of his yards and one-third of his touchdowns. In the backfield, the Buffaloes have a herd of running backs that give the team their best depth in years. The biggest concern for this offense will be the loss of blindside protector Jack Harris, which will be especially worrisome against the Trojan pass rush.

On defense, Colorado is deep and experienced. This may energize them after a lethargic 2013 campaign where they ranked 115th in the nation in points allowed. However, depth doesn't always translate into talent. The young buck Javorius Allen rushed for 145 yards and three touchdowns against this defense last year, and its improvement won't be enough to stop him or the rest of the USC running back trio.

Kessler will be facing a secondary that returns all of its corners and one of its safeties. Fortunately, Agholor is talented and athletic enough to expose the secondary and prove that it takes more than experience to garner results. But overall, USC's passing attack will see a setback in this game, however, the running game will be powerful enough to still produce a big offensive game.

At the end of the day, improvement is a low bar for a team that finished 1-8 in the Pac-12 last season and they should hurdle it with ease. But if the buffalos are looking for a win, they are roaming the wrong fields.

"Did you hear we beat Alabama?" If you've ever talked to a Utah Utes fan, don't be confused, they're still talking about their 2008 season. That's because there hasn't been anything to gloat about since their move to the Pac-12.

After leading the Utah Utes to two consecutive 5-7 seasons, the 2008 National Coach of the Year will be on the hot seat in 2014. Coming off of what will most likely be back-to-back road losses in Westwood and Corvallis, there will be no better time than October 25th to make a statement with a home win against the universally loathed USC Trojans.

Last season, Coach Kyle Wittingham and the Utes travelled to Los Angeles only to succumb to the sunny Southern California heat and experience an offensive meltdown. Kicker Andy Phillips scored on a 42-yard field goal in the first quarter and that evening, he walked out of the Coliseum as his team's leading scorer. Utah quarterback Travis Wilson left the game early due to a pre-existing arterial injury; that should have contained the melt as he completed just five of fourteen passes for a mere 51 yards and two interceptions. However, backup Adam Schulz continued the flameout with his 79 yards and an interception of his own. 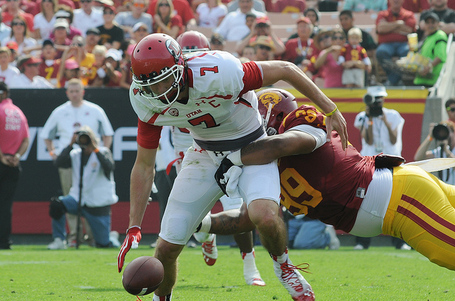 Utah's defense, on the other hand, showed signs of hope for Ute nation that has been forced to eat their cereal on plates the last two years, surprisingly not because of some ridiculous Utah state law, but because they have no bowls.

The defense held the Trojans to just one touchdown, and the dangerous running back tandem of Redd, Allen, and Madden combined for just 62 yards.

The Ute defense will look very different in this years matchup, as Utah will be replacing six starters. The loss of three defensive lineman and both corners will be a setback that Allen, Agholor, and the rest of USC's new-and-improved offense will take advantage of right away. Utah will return speedy corner Reginald Porter, but he will be coming off a hip injury and making a return that Kessler hopes is more like Kobe's than Peterson's.

The Trojan defense will find no issue remaining one of the best in the nation. Travis Wilson has been medically cleared to play, but he nor Schulz pose a threat to what should be blanket coverage by the USC secondary. The Trojan defensive front will be facing a group of Utah big men who will be missing 2013's left guard and center, while their tackles will be adapting to new positions in the interior. Leonard Williams will be throwing a party in the backfield, and the entire Trojan front seven will be invited.

Many people believe a hike into the mountains of Utah could be USC's traditional unforeseen loss. ESPN ranked the Mighty Utah Student Section (MUSS) the second-best student section in the Pac-12, and playing at an altitude of 4,657 feet could cause USC to stumble on their hike. However, an atrocious offense without signs of improvement and a drained defense will make it much harder for MUSS to remember why Wittingham received the aging coach of the year award.

Like possums, Utes play dead at home and get killed on the road. It should be a walk in the turf for Sarkisian to maintain his undefeated record. Don't expect a pretty game by the Trojans, but they will win handily, and could play change agent to Utah's football program just as Arizona State did to USC last season. At least with a home game Wittingham won't get the news in an airport hanger like Lane Kiffin.

A lesser known USC football tradition is to lose to a Pac-12 bottom feeder in the midst of an outstanding season. The 2003 Trojans finished the season 12-1, Rose Bowl champions, and AP National Champions, but lost in Berkley to the unranked Cal Golden Bears  34-31 in triple overtime, costing them a shot at the BCS national championship. Again in 2008, the Trojans finished 12-1 and Rose Bowl champions, but lost on the road to unranked Oregon State in Corvallis. Last season, the Cougars benefited from this dubious tradition by handing the Trojans an embarrassing 10-7 loss in the Coliseum.

This year, Washington State will host the men of Troy on their home field in Pullman, Washington. Can this year's Cougars help continue the tradition by leaving a stain in USC's record, while keeping USC out of contention for a national title?

Looking at the schedule, Utah and Washington State are the two games that have the most potential put a dent in USC's swordplay. A road game in Utah appears the most probable, but the absence of an offense with any threat to find the end zone against a stout Trojan defense, and a defense forced to start two new corners and three new defensive lineman hopelessly attempting to stop Agholor and Allen just seems improbable. Washington State on the other hand has done it, and did so just the prior season. However, that could be their problem.

After last year's implosion in their home opener, USC is going to be hungry to go up to Pullman and make cougar entrée for their post-game feast. With Washington State's right tackle, right guard, and both starting and backup center not in the picture, the belly of the Cougar offense will be exposed, and the Trojan front will be looking to conquer the backfield. Quarterback Connor Halliday led his offense to have the fourth best passing attack in the country, but pressure up the middle will force him to make quick decisions, which could lead to another two interceptions. Last season the Cougars were incapable of scoring a touchdown against the Trojan defense, and there should be no difference this year.

All the pressure to escape the tradition that haunts USC lies in the offense. The Trojans scored just one touchdown and threw two interceptions including a pick six. Fortunately for USC, Kiffin won't be standing on the sidelines calling bubble screens, and Kessler will be free of Max Wittek breathing down his neck. The Washington State defense will be missing three of their four secondary players from last year, and Cougar's defensive coordinator will be praying for a Hollywood-esque return of corner Damante Horton to show up in red and make-up for the helpless offense with another pick six.

On paper, the Trojans should be able to bounce back and serve justice to Washington State. But as the Trojan Family all-to-well knows, just because a team is light-years better, doesn't mean that's what the final score will show. If it was any other year, this would be the loss for the Trojans. However, last year's loss will still be in the back of their mind. Look for the Trojans to come out of the tunnel hungry with their mouths watering for some Cougar meat.