USC heads into the final stretch of its schedule. With two games against their rivals, can the Trojans remain unbeaten?

After nine games in our season preview, USC remains undefeated. At best, that prediction may seem biased or at the worse, completely delusional, but USC has all the tools it needs to make it happen.

Lest we forget, in the midst of losing the home opener to Washington State, a 62-41 blowout loss to Arizona State, the firing of head coach Lane Kiffin at an LAX hanger, and beloved interim coach Ed Orgeron resigning, the Trojans were a ten-win team in 2013-and the one that brought down the fourth-ranked Cardinal.

Quarterback Cody Kessler has finally become comfortable as both a passer and a leader.  Sarkisian has brought coaching stability and an up-tempo pace. The schedule for USC is difficult, but an undefeated record after the first nine games is not only possible-but likely. Playing Stanford early in the season is in USC's favor, and they matchup well with the Cardinal. Oregon State and Arizona State are at home, and the Sun Devils will have an inexperienced defense.

If the Trojans can survive the daunting stretch of potential upsets against Utah, Colorado, and Washington State, they will be sitting pretty at 9-0 come November. USC has one final stretch to survive in order to finish undefeated and Pac-12 South victors. But games against their two biggest rivals could make that a bumpy road.

Just over a decade ago, the Cal-USC game was an actual competition, and the result was a toss-up. USC's 30-28 home victory over Cal in 2002 or Cal's 34-31 triple overtime triumph over the third-ranked Trojans in 2003 marked some of the most exciting games of the year. However, a lot has changed in the last eleven years. The Trojans' program has taken strides that put itself miles ahead of the Golden Bears.

Prior to last season, the Golden Bears had averaged just 9.1 points per game against the Trojans in the previous seven matchups. Cal lost those games by an average of 19.3 points. Last season, the Golden Bears made a big leap by finding the end zone four times for 28 points, scoring more than three times their average against USC. Cal can thank freshman quarterback Jared Goff for that offensive leap. Unfortunately for Goff, his defense provided no assistance. Led by Buck Allen's 192 yards and three touchdowns, the Trojan offense speared the Bears en route to scoring 62 points.

But that was last season against a pitiful Cal squad that finished 1-11, and as USC knows very well, a lot changes in a year. Like the Trojans, Cal has had some changes in personnel-picking up some of the Bearcat's droppings during the offseason. Cincinnati fired defensive coordinator Art Kaufman, despite a defensive performance that allowed the 14th fewest points per game last season, and the Golden Bears immediately scooped him up. A new coordinator isn't going to immediately provide new legs for the broken Cal defense, but it's a steady shoulder for them to lean on.

Jared Goff walked through the tunnel of Memorial Stadium in late August as a true freshman, and left in November as a legitimate college quarterback. In his first collegiate game, he threw for 450 yards and two touchdowns. Despite three interceptions and a loss, Goff was off to a strong start. He went on to only win one game, but his 3,508 yards and 18 touchdowns gave the Golden Bears the eleventh-best passing attack in the nation. Despite a long winter's hibernation, Goff will retain most of his pack, as nine of eleven offensive starters return, and their offense should continue to improve.

Buck Allen and Nelson Agholor are already on all the watch lists and this game should solidify their contention for national awards. But if the Trojans let up, Goff and the Golden Bear offense could maul them. Outside linebackers J.R. Tavai and Jabari Ruffin will need to bring outside pressure, as Cravens, Shaw, and the rest of the USC secondary will have their hands full slowing down the young star. Bringing the Southern California force with the pass rush will force mistakes, and the Trojan defense will take advantage of them in a unique mid-week meeting. 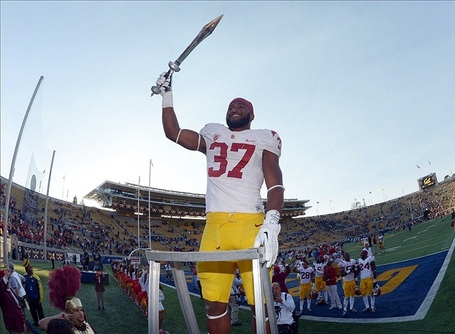 Cal is an improved team from last year with more experience and some personnel changes, but those things aren't going to make up for their record and last year's 62-28 home loss to USC. The Trojan defense will continue its dominance, putting a chokehold on the Bears while Kessler and the offense continue to keep their foot on the gas leaving the Bears in the dust.

Not only is the Crosstown Showdown a battle for the Victory Bell, but also it's a battle for Los Angeles. Winning 12 of 15 matchups against UCLA dating back to 1999, USC dominated the series during a time period that included two Bruin shutouts-most notably the 2011 50-0 win. However, the Trojans have found little success against coach Jim Mora who is now 2-0 against his team's crosstown rival. For the last fifteen years, UCLA football has been an afterthought in Los Angeles. But after winning two in a row against the Trojans, they think they run the city-that they are L.A's team.

UCLA has been the gum stuck to the bottom of the Trojan boot for the last decade, and taking back L.A. from Trojan rule is going to require more than back-to-back victories. Despite coaching turmoil and consecutive losses to their crosstown rival, USC was still able to dominate the Southern California region and out-recruit UCLA by snatching highly touted targets like Adoree Jackson and Bryce Dixon. But if UCLA is going to rewrite L.A. football, now is their time to do so.

The Bruins are coming off of their best season in recent school history, and are returning one of the nation's top dual-threat quarterbacks in Brett Hundley. UCLA is peaking at the right time, because USC is still not at full strength after the blow they took from the NCAA. Last season the Bruins took the short trip to the Coliseum and embarrassed their rival in a 35-14 beating. This year they get the Trojans at home in the Rose Bowl, but it's a place USC can call home just as easily as the Bruins.

An encounter with UCLA's offense in 2014 will be even more dangerous than one with an actual bruin, as UCLA will be returning almost all of their starting offense. The only loss that could potentially be problematic is second round draft pick Xavier Su'a-Filo. Although a strong defense led by Leonard Williams, Hayes Pullard, and Su'a Cravens will be ranked as the Pac-12's best, an offense of this power will pressure USC to prove how good the Trojan defense truly is.

That leaves the game in the hands of Cody Kessler and the offense. USC will have to outscore Hundley if they want to slow down the Bruins' conquer of Los Angeles. Fortunately for the Trojans, UCLA will be replacing its entire defensive line and two of their linebackers including Anthony Barr. That should give Kessler more confidence after he sat in the pocket like a deer in headlights in last year's Crosstown Showdown. It should also give the running game a chance to develop, a factor the Trojans will be relying on to move the ball down the field. USC may have a potential Biletnikoff winner in its arsenal, but with an experienced secondary that didn't take any hits from the draft or graduation, the Bruins will force the Trojan offense to be one-dimensional.

Unfortunately for the Trojans, they will have to wait one more year to finally silence the delusional Bruin fans that think their team runs Los Angeles. As he showed last year, Hundley is no match for the Trojan defense. Play contain, and he'll beat you with his arm; pressure him, and he'll beat you with his feet. Wilcox will be in control of a better USC defense than last year, but it won't be good enough. Jim Mora seems to have USC figured out, at least for now.

Standing 132 feet high, "Touchdown Jesus" looms over Notre Dame Stadium. The Fighting Irish believe the iconic symbol has had several miraculous interventions that guaranteed Notre Dame a victory. On a blustery day in 1980, the powerful winds suddenly stopped when the Irish went to kick the game-winning field goal against Michigan. During Notre Dame's undefeated season in 2012, Pitt missed the game-winning field goal, and the Cardinal were robbed of a fourth and goal touchdown. Last season, USC kicker Andre Heidari missed two field goals in four-point Trojan loss the Fighting Irish.

Call it the luck of the Irish, or the grace of "Touchdown Jesus," but Notre Dame has been bailed out at home more times than there are beads on a rosary. Had the icon been present in Miami, Notre Dame might have been the 2012 National Champions. Luckily for USC, "Touchdown Jesus" won't be looking over the Coliseum this year to sway Heidari's field goals wide right (sadly, he doesn't need help with that). Back in the Coliseum with (hopefully) a healthy quarterback, USC will be looking to resurrect itself from the two-straight losses that the rival Fighting Irish have buried them under.

This year Notre Dame will be featuring its own resurrection: the resurrection of Everett Golson. After being sentenced to a year in academic exile, the star quarterback, who led his team to an undefeated season and an appearance in the national championship, has returned to the football field for the 2014 season.

The return of Everett Golson will certainly help the Notre Dame offense; experience may be the most important factor Golson brings to the Irish offense. As the Irish quarterback, Golson took the team to a 12-1 record that included a 22-13 victory over USC in the coliseum. With the loss of running back George Atkinson, leading receiver TJ Jones, and tight end Troy Niklas, training a new quarterback to lead the team would have been a difficult endeavor.

Golson is also an efficient and explosive runner who led the team with six rushing touchdowns. His ability to make plays with his feet brings a dynamic to the Fighting Irish offense that was missing in 2013. Notre Dame will be without first-round draft pick Zack Martin at offensive tackle, giving Golson's mobility even greater importance. However, Golson will have the majority of an experienced receiving corps along with the luxury of 2013's leading rusher Cam McDaniel returning for the 2014 season.

Led by Golson, Notre Dame's offense will be much improved from last year. Don't expect them to put up a mere 14 points again. But the Irish's offensive attack won't be worrisome for one of the nation's best defenses, as they will have already played some of the best offenses in the country (Oregon State, Arizona State, and UCLA). Plus, if by some miracle (like "Touchdown Jesus" appearing in the Coliseum) Notre Dame is able to force a high scoring offensive battle, their defensive weakness matches up with USC's strength-the running game.

The Irish's run defense struggled in 2013, and the absence of nose guard Louis Nix and defensive end Stephon Tuitt who left a year early for the NFL will only make matters worse. In addition, Notre Dame will be filling big holes at linebacker left by Prince Shembo, Dan Fox, and Carlo Calabrese. The centerpiece of USC's offense will be its run game, and Allen, Madden, and Davis will be ready to exploit Notre Dame's weakness.

Rivalry games are never easy, and this will be a game that keeps Trojan fans on the edge of their seat all four quarters. Although the return of Golson will mold the Fighting Irish into an offense that mirrors what it was two years ago, the defense is what truly took them to Miami. That defense will not be replicated in 2014, and one of USC's running backs will be directing the world famous Sprit of Troy at the end of the game.