Time to break down the first three challengers on USC's schedule.

Former Washington coach Steve Sarkisian heads in to the 2014 season with the difficult task of leading the Trojans out of the wreckage brought on by the NCAA sanctions and the darkness that fell over Troy during the Lane Kiffin era.

In order to get there, he must quickly and successfully implement his new high-tempo offense, put together a cohesive offensive line, and find some new playmakers on the defensive side of the ball. There won’t be much time to settle in; the Trojans start the season against two opponents who each had eleven wins in 2013, and present one of the toughest non-conference schedules in the nation.

On December 21, 2013, the third head coach of the season led USC in a dominant display over Derek Carr and his Fresno State Bulldogs, in a 45-20 victory in the Royal Purple Las Vegas Bowl. On August 30, 2014, for the first time since the 1916 and 1917 seasons the Trojans will open their season against the last opponent they played the year before.

In the 2013 Las Vegas Bowl the high-powered Fresno State offense succumbed to USC’s aggressive pass rush and lockdown coverage in the secondary. The loss of their blindside protector Austin Wentworth should allow the Trojan pass rush to cause the Fresno State quarterback to sit in the pocket like a deer in headlights. In addition, the return of Josh Shaw, Kevon Seymour, Su’a Cravens, and Leon McQuay III in the USC secondary will force the young and inexperienced quarterback to make difficult throws.

This year’s matchup should have the same outcome as the last. Although Cody Kessler and the offense will have to adapt to Sarkisian’s new uptempo offense, that shouldn’t be a problem against a defense in which USC scored a little over 15 points above their average. Even if the offense struggles, the USC defense held the Bulldogs to just 21 points, which was less than half their average points per game last year.

In this year's meeting, Fresno State’s offense will be playing without their star quarterback Derek Carr and his two biggest targets Devante Adams and Isaiah Burse who combined for 2,744 yards and 30 touchdowns.

Don’t expect Kessler and the offense to put up their best numbers in this game, although it wouldn’t be a surprise if they did. But no matter what happens offensively, the defense will punish the Bulldog offense and keep them under 20 points.

On November 16, 2013, the fourth-ranked Stanford Cardinal entered the Los Angeles Memorial Coliseum looking to continue its domination over USC with a fifth straight victory. However, Coach Orgeron and the revitalized Trojans were playing their best football of the season, and Stanford was engulfed by the ear-splitting noise of 93,000 fans in Cardinal and Gold making the Coliseum sound more like a NASCAR speedway than a football stadium.

The Trojan’s front seven was dominant from start to finish, and they forced the one-dimensional Cardinal offense to throw the ball, leading to two interceptions and a 20-17 USC victory. 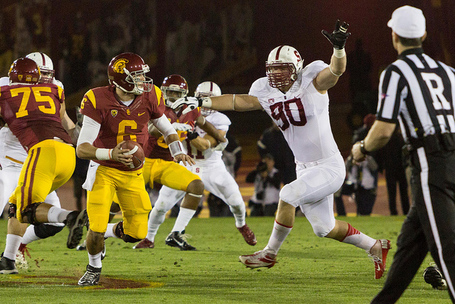 In this year’s matchup, however, there won’t be 93,000 fans in the stands supporting the Trojans. Instead, there will be 50,000 fans glaring at them in their Google glasses, as Stanford is looking to have their own version of Revenge of the Nerds after USC thwarted their BCS National Championship hopes last year. The Cardinal return eight of their eleven players on an already powerful defense. The loss of linebackers Trent Murphy and Shane Skov and now NFL free safety Ed Reynolds will definitely hurt, but several years of strong recruiting classes will keep it minimal.

Stanford returns senior quarterback Kevin Hogan and their entire receiving core that includes 2013 All-Pac-12 second team member Ty Montgomery. Luckily for the Trojans, when Hogan drops back to pass he’s as hopeless as Phil Mickelson trying to win the U.S. Open. Similar to what Photoshop does for Kim Kardashian, Hogan’s stats do for him. His overall 2013 numbers create the illusion he is a solid quarterback, however, when you look at his performance in the Cardinal’s five toughest opponents, he’s no better than Tony Romo in the playoffs. Hogan averaged 151.6 yards against UCLA, Oregon, Notre Dame, and USC, and combined for a whopping two touchdowns and six interceptions.

Unfortunately for Hogan, this year he won’t have the running game to bail him out as the Cardinal lose running backs Tyler Gaffney and Anthony Wilkerson and fullback Ryan Hewitt.

The September 6th game should be another low-scoring defensive bloodbath. Once again, USC has the better matchup. Stanford’s offense relies on its run game to keep it going, but they will be without four of their five starting offensive lineman from last year and the Trojan front seven will be just as strong as they were in 2013. The Cardinal would have their returning passing attack to fall back on (if you can even call it an attack), however, USC’s secondary will be much improved from last year and they lack a playmaking signal-caller to do so.

Even under Lane Kiffin’s bubble screen fanaticism, the Trojans were able to put up five touchdowns against the Boston College Eagles in 2013. The Eagles defense is in a rebuilding period, and they lost their two best pass rushers up front. With a new-and-improved no huddle offense under Sarkisian and a much-improved Kessler leading it, the Trojans will put on an offensive show.

After holding the Eagles to seven last season, the Trojan defense will once again dominate. Eagles offensive wonder, "Andre 2000", won’t be wearing maroon and gold this time, as he has moved on the NFL. Not that Williams would pose a problem, as he rushed for a season low of 38 yards and 2.2 yards per carry in the Coliseum last season.

However, Boston College has named Florida transfer Tyler Murphy the new starting quarterback. Murphy is a veteran guy who can throw the ball well and is very dynamic with his feet. Mobile quarterbacks have caused problems for USC in the past, however with strong coverage in the secondary, Leonard Williams and the rest of the pass rush should have no problem containing him.

On paper, this game should be a blowout. However, by no means should this game be written off as an easy win. Historically, USC is known for wetting the bed in easy games, and it has cost them some national championship appearances under Carroll. Just look at last season. Who would’ve predicted a week-two home-loss to Washington State? Coming off of an emotional, physical game in Palo Alto, and then traveling across the country could force the Trojans to have to wake up halfway through the game after giving the Eagles some early confidence.

In the end, Sarkisian knows any blemish on their record could cause them to miss out on the playoffs and he will have his Trojans motivated and prepared.