June 17th, 1994 stands alone as a historic day in life after football for O.J.

Share All sharing options for: O.J. Simpson 20 Years Later: Looking Back On The Infamous Bronco Chase

It seems like forever ago now, or maybe even just yesterday to some, but the legend of USC Heisman Trophy Winner O.J. Simpson took the national spotlight by storm by on June 17th, 1994 in the infamous Los Angeles Bronco Chase.

Look back 20 years in sports history, you see that the New York Rangers were Stanley Cup Champions, the last such time that has happened since. The Houston Rockets and New York Knicks were battling it out in the NBA Finals while Arnold Palmer was preparing for his final round in the U.S. Open. Team USA was gearing up for the 1994 World Cup, which was the last such event the U.S. hosted across the nation.

And then there was Heisman Trophy winning running back O.J. Simpson, who was charged and eventually dropped on two charges of murder in the Los Angeles area. Simpson was expected to hand himself in to the police, even go down without much of a fight, as the entire media landscape watched his every move with keep eyes.

What eventually ensued was noteworthy on a variety of levels, not only for its social and political implications but also for the transcending impact it would play on the legal, journalistic and sports world for the next 20-plus years.

The ensuing wire-to-wire coverage with Helicopter coverage and countless news reports opened the door for a wide investigation and eventual criminal trial on O.J. Simpson. It was a dramatic back-and-forth affair, and in amidst the jammed-pack weekend of sporting activities, the USC legend took center stage on an international level.

As bizarre as the 16 months between the June Bronco chase and the not-guilty decision felt, the ensuing 20 years (now 66-years-old) have matched it on a variety of levels. The verdict set Simpson free but also imprisoned him, sending him into the world as both a celebrity and a pariah, found innocent yet presumed guilty in the public eye. 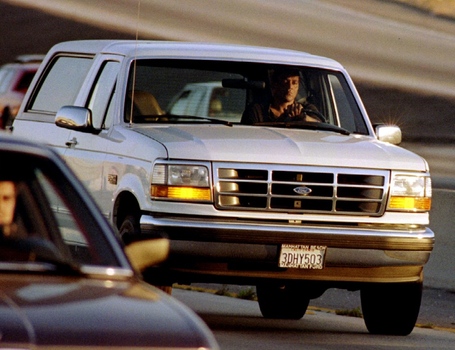 Exactly 13 years after being acquitted in the murder trial, a jury found Simpson guilty on 12 charges, including kidnapping and armed robbery. When finally pulling off the freeway, right off Sunset Boulevard just miles away from UCLA's campus, the television, pop culture and sporting world was taken aback in anticipation for the agonizing court case that followed that seemingly iconic but also mysterious White Ford Bronco.

Simpson, who finished his legendary USC Trojan career with 674 carries for 3423 yards and 36 total touchdowns, is still serving a 33-year sentence, and will be eligible for parole in 2017 but the fact remains that an entire generation of football fans, citizens and impressionable young men and women witnessed something tremendous.

WHAT HAPPENED TO EVERYONE IN THE O.J. SIMPSON TRIAL

Definitely recommend watching the ESPN E:60 Special on June 17th, 1994 as it perfectly lays out the sequence of events encapsulating Simpson's capture. The sports star was being viewed as an icon who was not being viewed for his huge rushing performances but a criminal being tracked down with no end in sight, so what actually transpired was a jammed-packed action thriller for those inside and out of the USC community.

This story definitely never involved touchdowns, rushing yards or even wins or losses, yet the total impact spans across every playing field. Throughout the country, people are glued to television sets. Bars and stores are packed with people watching the chase, ignoring appointments and work. Business comes to a screeching halt; customers are just standing, watching TV.

Every foot the Bronco moves is chronicled live on television, the demise of a sports legend documented. With a convoy of police vehicles in pursuit, blocking traffic on the freeway and entrance ramps, Simpson and Cowlings wind their way through Orange County and all the back to Simpson's Brentwood home, ending the chase.

As the Bronco pulls into the cobblestone driveway of Simpson's Tudor-style mansion, police officers in bulletproof vests converge on the car. As the SUV sits parked, its hazard lights blinking on the gentle June night, Cowlings emerges from the driver's seat and walks into the house. Simpson remains in the Ford, for nearly an hour, distraught and suicidal, cradling a revolver.

With hundreds of people having converged in the neighborhood, the LAPD Special Weapons and Tactics team and negotiators surround the house. At 8:50 p.m., they finally coax Simpson out of the vehicle. He emerges from the vehicle, minus his gun, carrying a framed family photo.

Simpson is allowed to go into the house, use the bathroom and call his mother. He is then transported by police motorcade to Parker Center and booked ... for murder. --ESPN's Daily Recount