The summer is a time for individual improvement and preparation for the season and the Trojans can be optimistic about their core talent.

The summer is a time for individual improvement and preparation for the upcoming season. Coming out of a jammed-packed spring ball, the Trojans can be optimistic about returning and incoming talent. Now that school is finally out of session and all that, here is an updated look at each position group heading into the dog days of summer practice on Cromwell Field.

QUARTERBACK: The starting position is wrapped up with Coach Sarkisian naming Kessler the starter. The real battle will be for the second string position. Returning sophomore Max Browne has looked good in the spring but early enrollee Jaleen Greene has made huge strides throughout the spring and should contend for the backup position in the fall. Both backups displayed unique skill sets Greene with his legs, and Browne with his immense arm strength and potential as an elite playmaker.

WIDE RECEIVERS: A quarterback is nothing without his receivers. Nelson Agolor is healthy and the shoe in as the top target. The rest of the core is up for grabs. Victor Blackwell, Steven Mitchell, Darreus Rogers, and George Farmer are all viable options. George Farmer is coming off his second season that he has missed due to injury and missed much of spring practice due to a lingering injury.

If Farmer can stay healthy he has (or had) the ability to be a top tier wideout just like his Gardena Serra counterparts Robert Woods and Marqise Lee. Look for Darreus Rogers to break out in the fall and become a solid number two option for Kessler after preforming well in the spring. Blackwell and Mitchell, who have each looked sharp in limited action, will also play a role in this up-tempo offense, as the rotation of receivers is vital to keep everyone fresh.

Also for the two incoming recruits that could contribute, Adoree Jackson and JuJu Smith, I would look for Sark to utilize at least one of them at the thinnest part of this years Trojan team, receiver. 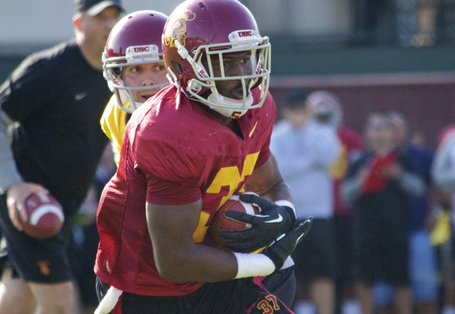 TAILBACK: From the thinnest to the deepest, even with the departure of Ty Isaac, running back is a position that is fully loaded for the Trojans. With Buck Allen and Tre Madden heading the stable, redshirt sophomore Justin Davis will also see some snaps coming off his injury as the unit continues to develop from top to bottom.

The new offense Coach Sark brings breeds running backs. Look at the last two backs he had in Washington, Bishop Sankey and Chris Polk both produced incredible numbers in Seattle. Look for these three to split time and put up big numbers as they all could be starters elsewhere in the country. If an injury befalls, look for walk on James Toland to fill in quite nicely. He has great speed and agility but is also thick enough to take his fair share of hits.

OFFENSIVE LINE: The line is the biggest question mark of the 2014 season. With lingering injuries in the spring and departures to the NFL the line could have four new starters in 2014. Max Tuerk will return switching to center showing just how vesicle he is. The other returning starter is Aundrey Walker, he has missed spring camp and could miss some of the fall with an injury sustained last year.

Zach Banner looked outstanding in spring at right tackle surprising most after coming of his hip surgery last year. Chad Wheeler looks to start at left tackle. Early enrollee Toa Lobendahn could start at left guard and Khaliel Rodgers is the starter at right guard if Walker cannot get healthy but there will be a competition if he able to recover. Also look for incoming recruits Damiean Mama and Viane Talamaivao to compete for a position from day one.

TIGHT ENDS: Tight ends could see a great increase in targets in the new system. Jaleen Cope-Fitzpatrick is the starter for now, and senior Randle Telfer once he returns from his knee injury could get some playing time. Outside of those two, the incoming freshmen Byrce Dixon and walk-ons Chris Wilson and Shane Sullivan (two of the most respected locker room guys on and off the field for this program) could see snaps due to heavy rotation and tempo of the offense.

DEFENSIVE LINE: The defensive side of the ball all starts with the front seven and Leonard Williams will bolster the front at defensive end. Look for transfer Claude Pelon to become a force on the interior. Antwaun Woods and Kenny Bigelow will play at nose. We saw some great things from Williams last season while playing with only 60 percent of his juice, and combine Woods with Bigelow up the middle give USC much-needed depth to fill the ever reliable George Uko's shoes after logging over 90-percent of the snaps last season.

Big Leonard Williams @LWtrojan94 is one of the top players in college football. #USC pic.twitter.com/U0F0X5Lg4G

Look for Delvon Simmons to take stride to get into the rotation on the line. The rush linebacker will be either Scott Starr (who won the job at the end of spring) or Jabari Ruffin, and on the other side senior J.R. Tavrai will hold down the fort. You can expect this to be one of the biggest position battles of the fall as Ruffin played really well in practice but Starr had the better spring and both have huge upside replacing Devon Kenard, who just got drafted by the New York Giants along with Xavier Grimble.

LINEBACKER: Senior captain Hayes Pullard will be in the middle come September baring a camp injury. At Sam linebacker Quinton Powell and Jabari Ruffin will duke it out in the fall for the starting spot. And Anthony Sarao took all the first team reps at Will due to an injury to Lamar Dawson. Incoming recruit Olajuwon Tucker could compete for reps at either Sam or Will due to his skill set.

SECONDARY: The defensive backfield returns its most dominant players in Su'a Cravens at Strong safety and Josh Shaw who seems to be staying at corner after returning from his lower leg injury that kept him out of spring practice. Returning opposite Shaw is Kevon Seymour, who continues to gain confidence following his last game of the year against strong Fresno State WR Davante Adams.

Look for incoming freshmen Adoree Jackson and John Platteburg Jr. to see time in the slot as the nickel corner. Adoree's skill set better suits the corner position but due to the depth at wide receiver it makes sense to utilize him there for this season.