All Grown Up: What Will Come Of This Year's Trojan Draft Class In The NFL?

Take a look at the prospects of former Trojans as they head to the NFL.

Share All sharing options for: All Grown Up: What Will Come Of This Year's Trojan Draft Class In The NFL?

With Justin Blackmon suspended indefinitely, the Jaguars are planning for a future without their talented receiver. This opens up the door for Marqise Lee to at least have a chance to compete with fellow rookie Allen Robinson out of Penn State to start across from Cecil Shorts III. Lee is a similar type of player as Shorts in that they are both extremely explosive home run hitters, and it’s obvious that the Jaguars brought him and Robinson in to help and grow with the team's first round pick, quarterback Blake Bortles. Still, Lee will probably be limited production-wise in his first year because Jacksonville has expressed their desire to sit the talented-but-raw Bortles in favor of the solid-but-unspectacular veteran Chad Henne.

With the incumbent starter Jonathan Goodwin gone via free agency, Marcus Martin will at least have the opportunity to compete for the starting center position right away. He’ll be surrounded with talent on the offensive line to help him out, but he still could struggle with making calls in Harbaugh’s elaborate offensive scheme, especially with a quarterback who is still developing, just because of the fact that he’s a rookie. San Francisco therefore might sit him in favor of a veteran like Daniel Kilgore at first, but Martin still looks like the center of the future for the 49ers.

At 200 pounds, Dion Bailey is too small to play linebacker, and will probably be looked at as a safety. It obviously won’t be easy for Bailey with two entrenched Pro Bowl starters at safety in Earl Thomas and Kam Chancellor, as well as a trusted backup in Jeron Johnson and Eric Pinkins whom Seattle just drafted, but Bailey could make the roster and compete for the third safety spot if he performs to the ability we saw at USC—his versatility and unique athleticism to play both the run and the pass effectively has to make Pete Carroll salivate. And, if he puts on a little more weight, he could eventually play linebacker in sub-packages for Seattle, where his athleticism would allow him to cover tight ends and running backs in space.

I won’t lie, it’s going to be hard for Silas Redd to make the Redskins’ final roster, especially with veteran players Alfred Morris, Roy Helu, and Evan Royster on a team that won’t emphasize running as much under new offensive coordinator and head coach Jay Gruden. Redd doesn’t bring any particularly unique skill to the table either, such as pass catching or eye-popping explosiveness (think Giovanni Bernard, Gruden’s old third down back in Cincinnati), as he is a fairly prototypical albeit talented running back. He will have to play a lot of special teams if he’ll have a legitimate shot at beating out the incumbent veterans and making the roster; his best shot may come with another team if he is cut by Washington.

Xavier Grimble should compete for a starting job right away with the tight end-depleted New York Giants. Grimble has shown flashes of athletic ability, and if he can stay healthy he has a legitimate shot to at least get decent playing time and maybe even start. After all, he will be competing against Kellen "Brick Hands" Davis and Adrien "Zero Career Catches" Robinson for the job. Grimble’s best years are likely ahead of him after an injury-plagued career as a Trojan.

George Uko is just the right size the Saints look for in their 3-4 defensive ends, but unfortunately for him, the talented Cameron Jordan and Akiem Hicks are already entrenched in the starting defensive end positions. On the flip side, the Saints’ defensive line isn’t especially deep, so Uko will compete with veteran players for a reserve role. He is talented but young, and his inexperience might mean that he’ll be a practice squad-type player for the first year or two of his career. He could also potentially come off the bench as a sub-package rusher and spell either Jordan or Hicks in passing situations as he is eased into the NFL game.

Chip Kelly loves athletic linemen, and he must have seen something he liked in Kevin Graf to sign him as a UDFA. However, the Eagles might have the best starting offensive line in the league, so Graf won’t have a shot to start barring a lot of injuries; that said, Philadelphia also doesn’t have any one backup who sticks out as their number one swingman, so a reserve role is surely a possibility for Graf. The Eagles have quite a few linemen, both veteran and UDFA, on their roster, and Graf will have a lot of competition. But the opportunity is there for him to win a spot on the roster or practice squad and even become the primary backup in the near future. 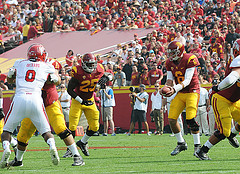