2014 NFL Draft: What is the Future of the Undrafted Trojans

As we kick off the final day of NFL Draft coverage, several former Trojans have NFL potential, but may not end the weekend on an NFL roster. Why won't they be drafted? Where will they eventually end up?

Share All sharing options for: 2014 NFL Draft: What is the Future of the Undrafted Trojans

He took advantage of it and ranked above average in every skills test (other than the short shuttle) for his position group. His 5.03-second 40-yard dash and 29-inch vertical put him in the top 10 of combine participants, and his 9-foot, 11-inch broad jump would've been the best at the last two combines.

Kevin Graf's ability to play on an island is questionable, he doesn't use his hands well, and he doesn't possess the "wow" factor to get him noticed by scouts. Those were the former Trojan's biggest criticisms. Starting three years at a program like USC and going unnoticed by scouts, never giving them a reason to lift their eyebrow, is impressive in itself.

Whether it was not having a self-absorbent Heisman-winning quarterback to protect like Jake Matthews had at Texas A&M, or a rags-to-riches national championship run like Greg Robinson had at Auburn, Kevin Graf may be one of the most unnoticed talents in this year's offensive line draft class.

Graf has talked with the Ravens and Rams during the East-West Shrine Game where he had a strong showing, and has worked out for the Panthers and the Seahawks. One of Graf's biggest appeals is his versatility. He has talked with teams about playing both left and right tackle, and possibly even guard at the next level.

Graf isn't going to get picked by teams looking for a starter, but for a team in need of some depth, he could late-round steal. Offensive linemen are one of the biggest needs for teams in this year's draft.

The Panthers, Lions, Raiders, Seahawks and Falcons are all teams that could pick Graf in the 7th round. Each of those five teams are in need of depth. Panther's left tackle Jordan Gross is retiring, and the Panthers aren't comfortable with his backup Byron Bell. The Raiders are starting three new guys on the line, and are going to need depth behind them.

The Seahawks are looking for someone to compete with last year's 7th-rounder Michael Bowie (although they may grab someone better earlier) at left tackle. And though the Falcons just drafted star tackle Matthews, their embarrassing ability to protect their highly-overpaid signal caller last season, lack of depth at both tackle and guard, and lack of confidence in Sam Baker makes the versatile Kevin Graf a great option late in the draft.

Third and twenty, and the Trojan defense was about to make a stop. Less than ten seconds later, Twitter looked like this:

Other reactions to Harris's performance:

USC cornerback Torin "See You Later" Harris is known for his supernatural ability to get torched on big plays. No matter the down and distance, he seems to find a way to give it up.

That wasn't always the case. Harris had fairly successful seasons as a sophomore and junior. Even though his coverage was still inconsistent, he still showed the ability to make plays including a game-sealing interception in the fourth quarter to help the Trojans hold on 19-17 over Minnesota in 2012. Harris came into 2013 as the Trojan's most experienced corner. He also showed that he could be a solid tackler, something many corners struggle with. As a junior he made eight tackles with one for loss against Syracuse.

Following his junior season, there were high expectations for Harris. After fall camp, Harris was listed behind Anthony Brown on the depth chart. After Brown injured his ankle in the Hawaii game, Harris got his chance, but quickly threw it away. Safety Josh Shaw was moved to corner in order to keep Harris off the field. Shaw would remain at corner where he flourished, and Harris would watch most downs from the sideline.

Don't expect to hear his name in the NFL draft. Just like his 2013 play, there won't be any coverage. He will hope to sign as an undrafted free agent and follow in former teammate Nickell Robey's footsteps. Last year, Robey went undrafted and signed with the Bills where as a rookie he played as their starting nickel corner.

However, if he doesn't get signed he will have to find a tryout with a team. The best fit may be Dallas. Word on the street is Jason Garrett's looking for another way to escape the playoffs in week sixteen.

Silas Redd finished third in the Big Ten in rushing with 1,241 yards and seven touchdowns his sophomore season, before escaping the disaster of the Penn State scandal and trading it for the disaster of a Lane Kiffin-run USC team strangled by NCAA sanctions. Despite it all, Redd fought through the adversity and ran for 905 yards and a career-best 9 touchdowns as the Trojan's co-starter.

After suffering an injury to his knee the spring of his junior year, Redd needed to brace himself for an injury-plagued senior season. Trying to avoid any affiliation with Kiffin's horrendous offense, he rejoined the Trojan offense for their sixth game of the season, their first game under interim head coach Ed Orgeron, against Arizona.

He was able to play the next five games, rushing twice for over hundred yards with a high of 140 yards on 22 carries, and a low of 0 yards on 10 carries. However, Redd was forced to return to the sideline where he would only return for just 5 rushes the remainder of the season, all against bitter rival UCLA. 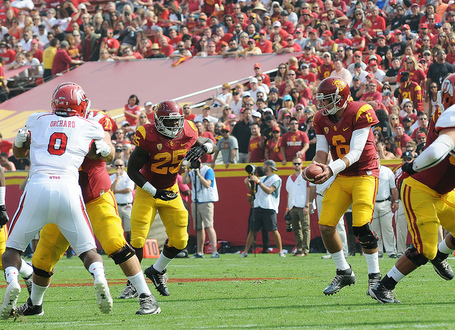 Silas Redd, the one time star-to-be, ran a slow 4.7 40-yard dash at the NFL combine this spring. His speed, durability, and ability to return to form are all questions concerning NFL scouts. Like the Titans did in Super Bowl XXXIV, Redd will fall just a knees length short, and will hope to be signed as an undrafted free agent.

There are several teams in need of some depth at running back, and he will have the opportunity to fill that role. The Texans, Falcons, and the Rams are all potentially good fits for Redd. The Houston Texans star running back Arian Foster will be returning after missing eight games in 2013 due to a back injury.

After losing backup Ben Tate to the Browns, Texans are in need of depth at running back. In addition, former Penn State coach Bill O'Brien is the head coach of the Texans and may give Redd his shot. The Falcons are another team in need of depth. Steven Jackson is aging and declining in productivity, and Jacquizz Rodgers is not a player that can take over as a starter. Falcons were interested in Redd early last fall, and may give him another look.

The Rams don't have a running back on their roster with experience playing in more than 14 career games. They're in dire need of depth, and if they don't take someone in the draft, St. Louis could give Silas a chance. If worst comes to worst, maybe the Vikings will sign him and he can get a few lessons on recovery from the master himself, Adrian Peterson.

Like UCLA's recruiting this year, Martinez peaked a little too early. He started every game at right guard both his sophomore and junior season, and was named All-Pac-12 honorable mention in 2012. However, just a season later he found himself splitting time with junior Aundrey Walker. After a senior season with just five starts, only Rex Ryan would take a risk on someone with that little experience...and he'd probably get a tattoo of him too.

Martinez had one last opportunity to prove himself to scouts at USC Pro Day. That's exactly what he did. Martinez out-preformed almost every player at the NFL combine with 42 bench press reps, tying UNC center Russell Bodine for first. Only 14 other players have surpassed 40 reps since 1999. If the NFL doesn't work out for Martinez, at least he can add that to his résumé.

Unfortunately, leading the prospects in bench press reps doesn't automatically make him a great lineman, just look at wide receiver Darrius Heyward-Bey. He had the fastest 40-yard dash at his combine, but that didn't help him catch the ball; but maybe that's just because he was playing for Oakland. Martinez will have to hope his sophomore and junior seasons can earn him an offer as an undrafted free agent, otherwise he'll have to prove it on the field with a tryout.

Several teams are in need of depth at the guard position. Some that may be interested include the Jaguars, Browns, Bills, Falcons, Panthers, Dolphins, and Patriots. If Martinez doesn't find himself on an NFL roster, he can always pride himself on out-benching top-rated guard Xavier Su'a-Filo from UCLA. Oh, and also on not being a Bruin.