USC Basketball at Oregon: What to Watch, TV Schedule, Odds and More

Share All sharing options for: USC Basketball at Oregon: What to Watch, TV Schedule, Odds and More

Pac-12 Woes - Both of these teams had aspirations of making the NCAA Tournament after strong non-conference play. USC was 9-4 with wins over Xavier, Boston College and a big win on the road at Dayton. Oregon was one of the final unbeaten teams in the country starting 13-0, including an unblemished 12-0 mark in non-conference play.

But once conference play began, things have fallen apart. USC was beat down in its first five Pac-12 matchups -- losing by at least 18 points each time. The Trojans have played much better their last three games, but only have a 1-2 record to show for it after back-to-back overtime losses for the first time in the history of the program. Things have been just as dour in the Pacific Northwest where the Ducks have dropped six of seven, including a pair of two-point losses at home.

Access Denied - Fans in the first couple of rows better be paying attention because there likely will be a few rejected shots coming their way. Omar Oraby has a nation's best streak of 26 games with at least one block. He had four blocks on Thursday to become just the fourth player in USC history to reach the 100-block plateau. With one more swatted shot, Oraby will tie Avondre Jones (1994, 96) for seventh place in USC history.

Transfer U - Oregon head coach Dana Altman has invested heavily in transfers. The Ducks have nine transfers on the roster, including all three of their top scorers: Joseph Young from Houston (18.0 ppg), Mike Moser from UCLA by way of UNLV (13.0 ppg) and Jason Calliste from Detroit (12.3 ppg). Moser, Calliste, Richard Amardi and Waverly Austin are all seniors.

Moser is most familiar with USC, having played three times against the Trojans in his career. He participated in both of UCLA's losses to USC in the 2009-10 season and then recorded a double-double with 10 points and 13 rebounds in a 2011 win over the Trojans after he transferred to UNLV.

Getting Heated Up - J.T. Terrell's shooting seemed to be coming around. The senior guard had been 8-of-16 from deep in the four games prior to the current road trip, but against Oregon State, Terrell was 0-for-4 on 3-pointers and just 2-of-7 from the floor. USC needs his ability to stretch the floor and open driving lanes for Byron Wesley and Pe'Shon Howard.

Approaching 1K - If Byron Wesley gets his season average of 16.8 points, he will join a prestigious group. Wesley is now just 14 points shy of becoming the 35th player to join USC's 1,000-point club.

Trojan All-Star - Toronto Raptors forward DeMar DeRozan never made it to the 1,000-point club, leaving for the NBA after a single season at USC, but he just further cemented himself among the all-time USC talents. DeRozan, who is averaging 21.8 points per game, was named to the 2014 NBA All-Star Team becoming the first former Trojan since Seattle's Gus Williams in 1983 to make the All-Star Team. DeRozan wasn't even born when Williams made his appearance in 1983.

Uncle Phil - All fans in attendance at Matthew Knight Arena this evening will receive a free bobblehead of Nike chairman and Oregon alum Phil Knight. The Ducks are calling Saturday night's game "Phil it UP Appreciation Knight" in celebration of Knight's 76th birthday. The Phil Knight bobblehead is of the school's biggest booster, who has donated millions of dollars to the Eugene school. Oregon will also be honoring this season's football team at halftime. No word on what type of Rolex De'Anthony Thomas will be sporting. 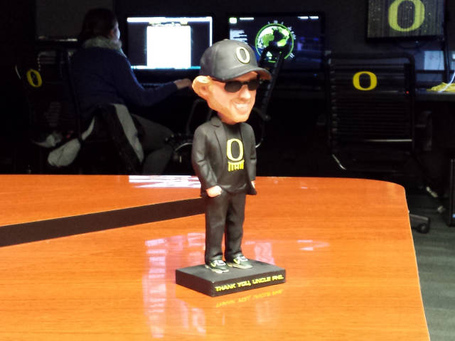 Jan. 19 - Oregon 76-74 (@ Galen Center). J.T. Terrell did everything he could to try to rally USC from a 10-point deficit with three minutes remaining, but his USC career-high 22 points wasn't enough to knock off No. 21 Oregon in the Trojans first game under interim head coach Bob Cantu.

Omar Oraby had a pair of dunks at Oregon State, outdunking the Beavers two to one. USC has outdunked its opponents 56 to 29 this season, according to ESPN's play-by-play logs (missed alley-oop passes are not included, only clanked jams). Here are the top Trojans that have thrown down this year: