But was there anything wrong with what USC was doing? See the video and decide.

In the second half of USC's 35-10 victory over Oregon State, the Trojans ran roughshod over the OSU defense.

After having only 13 yards rushing in the first half, USC finished with 200. Buck Allen and Justin Davis almost had twin 100-yard performances, finishing with a combined 197 yards.

While a number of those yards came on rushes to the outside, the Trojans were also able to take advantage of two key injuries in the interior. Early in the second half defensive tackle Jalen Grimble and his backup Noke Tago both were forced to leave the game. 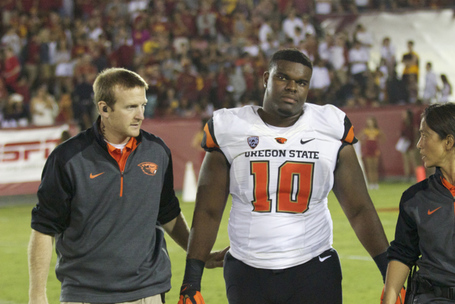 On the first play of the second half Saturday at Memorial Coliseum, defensive tackle Jalen Grimble's knee buckled on a chop block. Grimble's backup, Noke Tago, then left the game during USC's next drive with a knee injury after another Trojans chop block. Grimble will miss three to four weeks after undergoing surgery next Monday, while Tago is likely done for the season.

USC wasn't penalized on either play.

"You don't know if it was done on purpose or not," Banker said, "but I just think the technique was questionable." 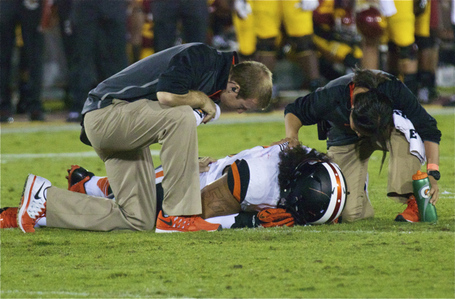 First, it should be pointed out that the blocks in question were cut blocks, not chop blocks.

Cut blocks are blocking someone head on, leading with the helmet, but attacking below the waist. Nobody wants to be the target of a cut block. They are annoying, frustrating and potentially dangerous. But they are also legal.

Chop blocks, on the other hand, are blocking someone below the waist while they are already engaged with a blocker. Any combination of high-low or low-high blocks is illegal.

USC fans that watch the NFL should know a little about dirty chop blocks after seeing this block end Brian Cushing's 2012 season (click to watch the gif via usatthebiglead.files.wordpress.com):

Those were not the type of blocks that the Oregon State injuries occurred on.

Jalen Grimble was injured on USC's first offensive play of the second half. The Trojans go with an off-tackle run to the right. On the backside of the play, left tackle Chad Wheeler takes a hitch step backwards with his right leg, takes one step forward and dives to cut defensive end Dylan Wynn.

At the same time, Viane Talamaivao is coming across from right guard to pick up Grimble. Grimble dips his left shoulder to try to rush through the line and is pushed by Talamaivao into the trench traffic of Wheeler's cut attempt on Wynn.

There could be some contention that this was on purpose, but it seems quite unlikely.

The season-ending injury to Noke Tago looks much worse. Center Max Tuerk fires off the line to cut Tago, who freezes when Tuerk comes at him low. Rather than getting out of the way in any shape or fashion, Tago takes a direct blow right on the knee from Tuerk. If Tago keeps his feet moving like players are taught, maybe the injury doesn't happen?

While the initial angle in the video below doesn't look to be too bad, the close ups show Pago's knee buckle sideways. It looks bad, but again, it is still a legal hit.

While the game was going on, seeing several Oregon State defensive front-seven players have to be helped off the field, I suspected USC had been doing a lot of cut blocking. I had taken a couple of pictures of linemen going low, but since I was shooting photos throughout the game, I didn't have the opportunity to focus on how often the Trojans were cut blocking.

Following the game, I chatted with USC offensive line coach Tim Drevno about his offensive line play, including the strong play of senior Aundrey Walker in his first game this season, but also his team's cut blocking against the Beavers.

SS: "Oregon State had a number of defensive linemen go down with injuries. It looked like you guys were cutting a little bit more. Was that part of the gameplan?"

Tim Drevno: "Nah. I don't think so. I don't think...um...there wasn't anything we were trying to chop. We were just doing our normal stuff."

Was Drevno right? Was USC simply doing their normal stuff and Oregon State just happened to suffer a couple of injuries? Or were the Trojans playing dirty against the Beavers?

I decided to look.

And by look, I mean LOOK...at every offensive play the Trojans have run this season (minus two drives that didn't make the DVR recordings). How many times had USC run plays featuring cut blocks? Had there been any chop blocks that might not have been called by the officials?

(The two drives that I missed were during the Oregon State game because the South Carolina/Missouri game bled into the USC/OSU start on ESPN and the game lasted so long that the recording didn't last long enough for USC's final drive. However, I do know of at least one play on that final USC drive that involved cutting since I have pictures of it, so that play is included. In the photos I have, there was no other cutting, but it's possible something could be happening out of frame.)

No, USC hasn't employed any chop block techniques from what I've seen. But it did use cut blocks more frequently against Oregon State -- nearly as many as it had used combined against Stanford and Boston College (14 vs 16).

But that could simply be that USC's outside run plays that call for backside cut blocks were working successfully. The 14 cut blocks against the Beavers isn't enough to warrant a red flag that the Trojans were doing anything unusual or dirty.

The most difficult play to asses is Max Tuerk's block of Noke Tago. The play that likely ended Tago's season is the only time that Tuerk has attempted to cut a defensive lineman this season and the only time he's cut a backside defender behind the play.

USC typically is trying to reach the backside defenders with the tackle and/or guard and cut them before they can cross the offensive lineman's face. By cutting the backside defenders, USC's running backs have the options of cutting back without worrying about the defensive tackle or end coming across the formation and hitting them as they try to make their cut.

The Trojans have also used cut blocks on some of its quick passes to try to get the hands of defensive linemen out of the passing lane. There's not much more frustrating for a quarterback than having a guy open, firing it and having the defensive end swat down a potential first down.

Cut blocking has a couple of distinct purposes, but it also has a psychological purpose of slowing down attacking defensive linemen by making them think about the block that is coming. Being cut down and having to get up multiple times also takes its toll physically because of the big bodies that are being cut. Leonard Williams had to deal with it when USC played Fresno State in the opener, but still was able to make plays.

No defensive coordinator wants to see two of his defensive linemen go down, especially when you still have the power running of Stanford and the quick attack of Oregon left on the schedule. Mark Banker should definitely be upset about the injuries, but was Banker wrong to be upset about USC's usage of cut blocking?

Steve Sarkisian, what do you think?

"I totally disagree," Sarkisian said after Wednesday's practice. "I went back and looked at the plays their two players got injured on. Quite honestly, it was incidental contact. It’s unfortunate that he feels that way."

Sarkisian said he would call Banker and clear the air about the incident. But don't expect USC to eliminate its cut blocking schemes any time soon.