Key moment(s): Surging Into the Half. USC basketball opened up an early 13-6 lead and pushed that lead up to 13 points on a 3-pointer from Pe'Shon Howard with 3:43 remaining before halftime. But the inevitable run that opposing teams have been going on all too frequently in Pac-12 play came after the bucket.

The Cal Golden Bears (14-5, 5-1) scored eight straight points in the next two minutes and it looked like things would start to fall apart for USC. But instead, the Trojans were able to push the lead back up to nine points (and had multiple opportunities in the last 10 seconds to push it to double digits) and Cal wasn't able to get as close the rest of the game.

Dagger Threes. USC led by a game-high 15 points with 11:44 remaining, which was very similar to the situation last year at Cal when the Golden Bears came back to beat the Trojans. Twice on Wednesday Cal cut the lead to 10 and seemed poised to make a run.

Both times there was a timeout and coming out of both timeouts, USC drained 3-pointers to assure the Bears couldn't get the momentum going for a big run. Byron Wesley drove into the lane and kicked out to Julian Jacobs in the left corner for the first with 10:14 remaining. On the second, with 4:29 to go, Howard inbounded the ball to J.T. Terrell, who got free in the left corner thanks to a strong screen from Omar Oraby.

Player of the Game: Nikola Jovanovic. USC had been 7-1 when Nikola Jovanovic scored 10+ points. Make that 8-1...and 1-0 when he scores 20+. The Serbian freshman went for a career-high 23 points on a nearly perfect shooting night. Jovanovic finished 8-for-10 from the field and 7-for-7 from the free throw line.

"You need players to step up. Byron can't do the scoring every game," Enfield said. "We're 8-1 when Nikola scores double figures. He just walked in the room, so hopefully he understands that. If he plays like he did tonight, there'll be many more nights like that."

Here are Nikola Jovanovic and Byron Wesley talking about the game and getting the first Pac-12 win for Andy Enfield:

Most Spectacular Play(s): Behind-the-Back Dish. Pe'Shon Howard orchestrated the two most spectacular plays of the night. The best started with Tyrone Wallace trying to pressure Howard at half court. The senior guard went right by Cal's best on-ball defender and knifed straight through the lane.

None of the Bears stepped in to try to stop Howard and forwards David Kravish and Richard Solomon only came over to try to block Howard's shot after he had sprung from the middle of the lane. Heading toward the left side of the rim, Howard split the two and dished the ball backwards to Jovanovic, who put up an easy layup and was fouled for a three-point play that gave USC its biggest lead. (1:38 mark in Highlights below)

Spin Doctor. Just before halftime, Howard used a screen from Oraby at the top of the key to get free of Jordan Mathews. Howard got in the lane by crossing over big man Kameron Rooks, who was trying to hedge. He then went up and under right in front of the rim to split Jabari Bird and Kravish. On his descent, Howard reached the ball out to his right and spun it up and off the backboard using the English to ricochet the ball off the glass and ithrough the net. (1:07 mark in Highlights below)

Unsung Hero: Pe'Shon Howard. Andy Enfield turned the reigns over to the senior transfer. After playing a wing position primarily, Howard took over the point guard position and created. With the ball in his hands on every possession, Howard got everyone involved and kept the offense moving. He didn't shoot well from the field (4-for-12, including 1-for-7 from deep), but Howard was tremendous in every other aspect, finishing with 12 points, 10 assists (most by a Trojan this season), 6 rebounds and 2 assists.

"Step It Up:" Finish What You Start. One of the players that Howard got involved early was Omar Oraby. Howard fed him for a pair of alley-oop dunks and Oraby also had a layup and a turn around hook shot in the middle of the lane. He scored nine points on perfect 4-for-4 shooting in the first half. 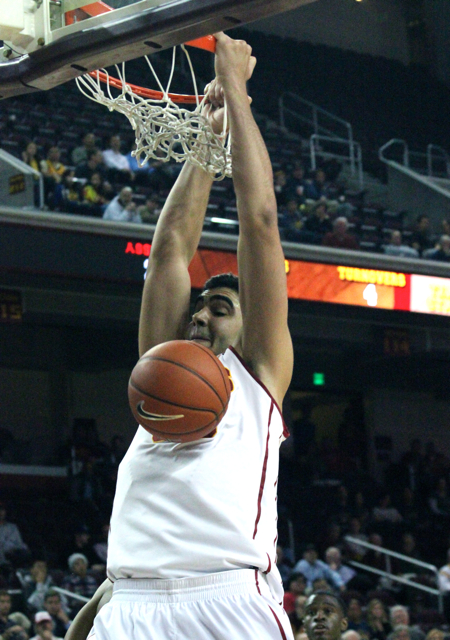 In the second half, he was essentially a non-factor on the offensive end, attempting (and missing) only one field goal. More credit should be given to Jovanovic and his 17 second-half points than blame to Oraby for the second half production, but you want your senior to be able to build on a strong first 20 minutes rather than disappear after it.

Key stat(s): 51.9 & 39.3. The Trojans shot 51.9 percent from the field for the game, including 55.6 percent in the first half. Cal, on the other hand, shot only 39.3 percent with just a 32.3 percentage in the first 20 minutes. The Golden Bears are 13-0 when they outshoot their opponent. It was essential for USC to win this category and keep Cal under 46.2 percent -- the Trojans have lost only once when holding the opposition below 46.2 percent.

48 & 95. Omar Oraby's second-half swat of Jordan Mathews gave him 48 for the season, tying him with Sam Clancy's 2002 campaign for eighth on USC's single-season blocks list. The block also tied him for eighth on the Trojans' career list with Nikola Vucevic, who also had 95 blocks.

Quote of the Night:

"We need more than one scorer. We've proven we have a tough time winning unless three or four guys play well." -- USC head coach Andy Enfield

Sideline Moves: Enfield said he needed to change things up after losing five in a row. His decision to sit Julian Jacobs and bring him off the bench worked brilliantly. With the ball in his hands most of the game, Howard was dynamic and created opportunities for his teammates and when Jacobs came into the game, he produced a spark for the Trojans.

"Both of those guys average four assists per game. Tonight, Pe'Shon had 10 and Julian had four, but the most impressive thing about Julian is he had zero turnovers," Enfield said. "He had 12 points, four assists and zero turnovers coming off the bench, which was really what I thought was the key to the game."

Enfield's bench shrunk to nearly seven players. Besides the starters, Jacobs and Strahinja Gavrilovic, D.J. Haley was the only other player to see the court and he played only nine minutes. Chass Bryan, Roschon Prince and Brendyn Taylor did not play.

Where They Stand: USC basketball and Andy Enfield are finally off the snide in Pac-12 play. It was a big win for the Trojans to "finally be able to get the monkey off our back," as Byron Wesley said. When USC has multiple players show up to play, the Trojans can be a dangerous team. But are they cohesive enough or can they jell quick enough to make a run during the remainder of the Pac-12 schedule?

The first challenge comes on Sunday at 2 p.m. PT when the Trojans will host Stanford (12-5, 3-2) at the Galen Center. A win on Sunday would be big going forward with a trip to the Oregon schools -- neither of which is playing well -- next week.

Spotted: Adam Spanich, who famously completed one of the greatest last-second comebacks in college basketball history, was in attendance. The former Iowa Mr. Basketball (1995) and USC guard (1997-99) went undrafted and bounced around professional leagues, getting a cup of coffee in the NBA D-League with Tulsa in 2006-07, but he will always be remembered for his finish on Jan. 7, 1999:

Highlights: Here are some highlights from the game, courtesy of @USC_Hoops: