Running With the Pac-12: Opening Week

Here is an in-depth look at all the action surrounding the rest of the Pac-12 conference, including some major upsets and dominating displays of offense on the west coast.

Share All sharing options for: Running With the Pac-12: Opening Week

The opening week of College Football has come and gone, yet the Pac-12 conference experienced its share of highs and lows across the board. While the west coast continues to beef up their programs with top-notch head coaches and new-look formations, here are the key stats, plays and situations to keep an eye around the entire slate of conference games. We will also add key strengths and weaknesses of the opponents on the docket,specifically with how they threaten USC on a weekly basis.

WHAT WE LEARNED: While the Wildcats may not have their complete arsenal of weapons (WR Austin Hill and QB Matt Scott) from last season, Rich Rodriguez spread option threat is well versed in Arizona.

THREAT TO USC: When the Trojans host Arizona in October they must be prepared to face a high-tempo, no huddle look. While Clancy Pendergast has worked wonders, the biggest challenge coming his way resides in stopping the speed-option threat from clubs like Arizona.

WHAT WE LEARNED: The Ducks will be running wild with any team in the nation this season under first-year head coach Mark Helfrich. Scoring 24 points in the first quarter alone, the Ducks offense was prolific from the start featuring plenty of read-option sets.

THREAT TO USC: Since the Trojans do not play USC in the regular season, keep an eye on the new-look turf at Autzen Stadium which is just another facet of Phil Knight's play place for the Ducks vigorous attack. 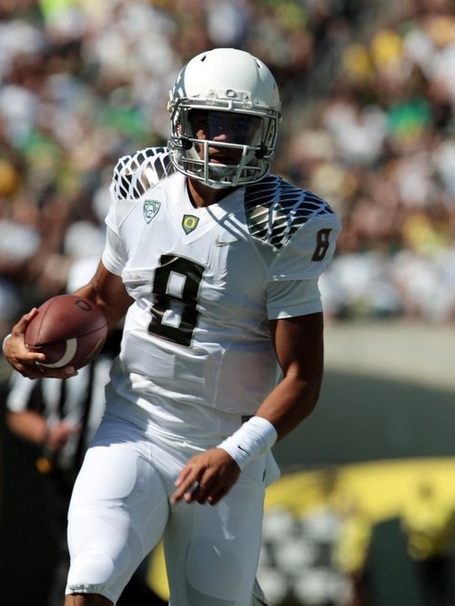 UTAH- The addition of Dennis Erickson as offensive coordinator has instantly boosted Utes attack. Sophomore quarterback Travis Wilson has grown into his 6-foot-5 frame, firing darts all over the football field.

UTAH STATE- Chuckie Keeton is one of the best do-it-all type quarterbacks in the nation and has the ability to carry his team to victory each and every week. Unfortunately, the Aggies pass defense did not spare him any favors, allowing for such a high scoring affair.

THREAT TO USC: With both teams slated to play at the Coliseum, this tilt proved to be the most watchable and noteworthy from the weekend. Utah State can give the Trojans a major challenge if Chuckie Keeton is allowed to scramble and make plays on the run. The Utes meanwhile, have vastly improved their overall scheme on offense which could allow their ultra competitive club a chance to compete in conference play.

WHAT WE LEARNED: Brandin Cooks is a play maker, plain and simple. The Oregon State Beavers needed a burst on offense and QB Sean Mannion called upon his big time play maker to the tune of monstrous gains each and every occasion. The biggest concern however comes from the Oregon State DL, which replaces two starters from last season is recognizably less powerful from the Pac-12 leading unit against the rush.

THREAT TO USC: While Oregon State did show some major complacency in their opening game, the fact remains that a Friday night tilt will remain challenge in itself for USC. In terms of x's and o's, the Beavers defense looks prime to slice up like a piece of Marqise Lee pie and the Trojans must spread the rock to all their weapons on the road.

KEY STATS: Connor Halliday 65 Passing Attempts...Not so surprising under Mike Leah, Gabe Marks with 9 rec. for 81 Yards, one of 10 Cougars with receptions on offense.

WHAT WE LEARNED: With the Cougars coming to the Coliseum this week, the Trojans will definitely need to freshen up on their coverage drops and positioning against this pass-heavy offense. While this team is certainly more capable to move the football than Taylor Graham mustered up (4 INT), the Cougars are a turnover prone offense due to the high amount of passes.

WHAT WE LEARNED: The UCLA Bruins Offense is locked and loaded for an outstanding campaign. With Brett Hundley gaining confidence by the snap under Jim Mora, the Bruins have also found their replacement running back in Jordon James, a converted defensive player. The Bruins did show some struggles defensively early on in communication but stifled the Wolfpack in the second half for a dominant performance.

THREAT TO USC: When the Bruins come to town in early November, USC must prepare for plenty of read-option looks including the heavy hitting weapon Shaq Evans and Devin Fuller down the field. This club is playing with confidence and has shown an ability to rush the passer with Anthony Barr leading the charge so pass protection must be of the highest order for the cross-town showdown.

No. 19 Boise State at Washington

WHAT WE LEARNED: The Washington Huskies will be one of the best teams at home in the nation. Playing behind a soldout crowd at Husky Stadium, the defense came out with purpose and intensity from the opening snap. The bend but don't break unit limited Boise State in the red zone, while not allowing a single touchdown.

THREAT TO USC: While the Huskies do not play the Trojans, Keith Price is certainly taking his team to the next level. Expect the Huskies to be a major sleep in the North with championship aspirations if they can pull off an upset over Oregon at Home.

No. 22 Northwestern at California

WHAT WE LEARNED: Sonny Dykes has arrived on the Cal Campus guns blazing on offense. Last season, the Bears played a very conservative game plan with short hitting passes and quick strikes, a facet that has quickly changed. Goff attempted 60-plus passes with average receptions going for 11 yards on the night. Defensively the Bears played quick sideline to sideline but showed some major weaknesses up the middle.

Who are we kidding? – Although they are 1-0 after beating Colorado State.