USC vs. Boston College: The Good and the Bad

It was a dominating performance for the Trojans, one they needed. What did we like? What DIDN'T we like?

Share All sharing options for: USC vs. Boston College: The Good and the Bad

I'll just jump right in: Shotgun was gifted tickets to last weekend's game. After searching through a Los Feliz neighborhood at 2:30 in the morning Friday night for the right 'Welcome' mat to look under, he posted on Facebook in the morning that he had an extra ticket. At 10:30, we were surrounded by people yelling 'Fire Kiffin' and copious amounts of Fireball, Jagermeister and even Cinnamon Toast Crunch (quite delicious, by the way) shots at Psychogate.

Attending the game with someone who actually knows football was such a needed respite from having folks around me who had no idea what the overtime rules were even after having them displayed on the big screen. We observed the game and made comments much like two elder curmudgeonly critics. Here's what stood out to us, the positives and negatives.

WR: What a relief seeing a QB gun it for the first time since the end of last season. Once a full-time starting quarterback was installed, the passing game would improve. There was no way it wouldn't. And Kessler's first game with the job firmly in his grasp showed what he can do, going 15-for-17 passing, 237 yards and two touchdowns.

SS: It was great seeing what Cody Kessler could do. He stood in the pocket and withstood some pressure, including get lit up but still getting the ball out on USC's first score -- a five-yard Tre Madden score. His only two misses came on the first play of the game and his next to last pass attempt. (Of course, it would have been nice to have those two completions since they would have added another 100+ yards to Kessler's total.)

WR: Who would have thought the No. 1 running back in Silas Redd's absence would be a linebacker-turned-runner who was actually good? I'll wait.

SS: Talk about taking advantage of your opportunities. First USC back to start a season with three 100-yard performances since Marcus Allen...not bad company there. 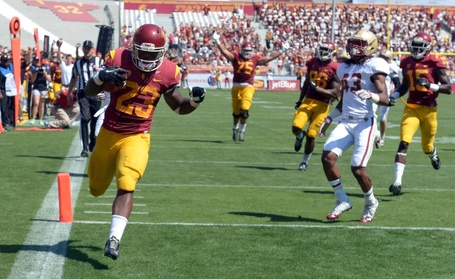 No. 2 Rush Defense in FBS

SS: Andre Williams entered averaging 159 yards per game and 5.5 yards per attempt. Clancy Pendergast's fearsome defensive front allowed him 38 yards on 17 attempts (2.2 yards per attempt) and swallowed him in the backfield on a 4th-and-1 play the only time the Eagles moved into USC territory against the first team defense. The Trojans are now allowing only 43.7 yards per game -- second best in the nation behind only Texas State (34.0).

SS: When I wrote last week that Lane Kiffin wasn't USC's biggest issue, some people seemed to interpret that I agreed with his play calling. While I didn't nearly have as big an issue as almost everyone else, we could all agree that some more diversity wouldn't hurt and that's exactly what we saw against Boston College. There were more rollouts and flood patterns and the Trojans thrived on play-action attempts.

WR: Having eight different players catch the ball with so few pass attempts is kinda crazy. But good crazy. Definitely good crazy. (And Soma Vainuku actually caught the ball...just had to throw that in there after last year's attempts. -- SS)

WR: The kid is straight-up filthy. Some of those cuts he made should not be within the ability of a 17-year-old freshman. Yeah, he turns 18 in two months. Expect that vision and patience to get better and better.

SS: The offensive line played better, but still had some inconsistencies. What was impressive, however, were the key blocks down the field the Trojans got on some of their big plays. Nelson Agholor sealed off his defender allowingMarqise Lee to scamper down the sideline untouched on his 80-yard touchdown. Xavier Grimble had a nice block on the outside and Kevin Graf and a pulling Max Tuerk had a double team block to lead the way for Madden on his 30-yard TD run.

WR: The unit deserved a break after another killer, crushing 53 minutes of lights-out defense.

SS: Getting the first unit some rest was much deserved. Having them healthy and rested is going to be something to keep an eye on leading into the Arizona State game. The Sun Devils uptempo offense in the desert heat will definitely test the Trojans' conditioning and depth. And the second team defense didn't quite inspire much confidence.

SS: On first down, the Trojans were 6-for-7 for 157 yards...and the one they missed on the first play of the game should have been a 75-yard touchdown. A lot of that has to do with establishing the run and being able to use play-action fakes.

WR: For whatever reason, I think every first play of every game should be a play-action pass deep. Don't care if it's 17 games in a row, just do it. And for once, courtesy of USC president Max Nikias, that's what the Trojans dialed up! But Kessler JUST missed a criminally open Marqise Lee. You can't miss open players on a gimme like that.

SS: Having a wide receiver WIDE OPEN like Lee was on the first play of the game is one of the scariest situations for a receiver and one of the hardest throws for a quarterback. I know it sounds counterintuitive, but there's never more pressure. Six points is right there in front of you and all you have to do is make a throw and catch. The entire crowd audibly inhales as the fans see the play develop. The hardest part is remaining calm when all that's going through your head is "OH MY GOD, OH MY GOD OH MY GOD!"

As a quarterback, there's only one thing you can't do and that's overthrow your man. Lee was at least three steps ahead of the last defender. If all else fails, Kessler has to underthrow the receiver and let one of the most dynamic pass catchers in the country go up and get the ball. It's better to take a 40-yard gain and attempt to shake off the defender.

WR: Last year's Achilles heel besides playing defense with no men on the field was stupid penalties. And man, were there some dumb ones. Ten penalties for 100 yards is not OK, especially avoidable personal fouls.

SS: I'd rather watch an exciting team get a couple plays called back on penalties than a boring team that never has any plays worth being called back (ala vs. Wazzu). But you can't have the just plain dumb errors such as Vainuku jumping offsides when this is about to happen: 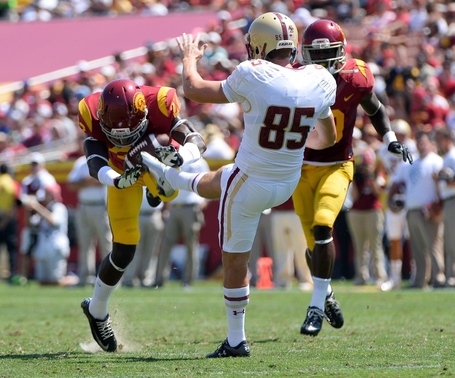 SS: Kessler's only other incompletion came on the first play of the fourth quarter. On 2nd-and-7 from the Boston College 40, Kessler threw a deep ball with Lee coming across the field toward the left sideline. Lee got his feet tangled/clipped by the defender he had beat, but the ball hit him right square in both hands and clunked away like a free throw from a Laker center (take your pick...Wilt, Shaq & Dwight were all terrible).

Wittek running the ball on the goal line

SS: I love the fact that Max Wittek (successfully) fought to get into the paint. However, I don't like to see quarterbacks take unnecessary hits, and it seemed he had an easy dump throw to an open Nelson Agholor coming across the back half of the end zone. The same Agholor that doesn't even have 100 yards on the season yet. Get the receivers the ball and boost their confidence.

SS: The Trojans have limited depth. That's a known fact. Any losses can be devastating, especially at positions like receiver where they are already thin. But that was the case on Saturday as freshman Darreus Rogers, who was one of the fall camp standouts, left the game with an ankle injury and had to be carted from the sideline to the locker room. Kiffin said Sunday he hopes to have Rogers available this weekend, but there didn't seem to be a lot of confidence behind the statement.

Randall Telfer also left the game after recovering Madden's fumble right before the end of the first half. I did not see Telfer return (and if he did, it was only briefly). Instead, the Trojans were forced to go to more three receiver and traditional I-formation, one-tight-end sets.

SS: I understand you think you could do more with USC's offensive talent than Lane Kiffin. We all agree that the Washington State game plan was less than ideal. But when people near us in the stands are condemning plays before they develop? C'mon son!

My favorite sequence was a 10-yard screen pass to Agholor on 2nd-and-18 followed by Madden's 30-yard touchdown run. On both plays, people nearby reacted with negative comments...that were cut off once the fans realized the positive outcomes.

WR: Blocking was much better this time around -- the running game is evidence of this. But there were still hiccups. I mean, Aundrey Walker is still in there, and his play is susceptible to the occasional lapse. After the previous two games, one good performance does not eradicate my skepticism.