Share All sharing options for: Rod Dedeaux Inducted into the College Baseball HOF 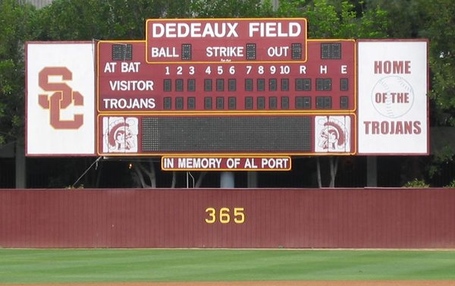 Because this should have been done a long long time ago.

USC legendary baseball coach Rod Dedeaux was a part of the inaugural class that was recently inducted into the Omaha College Baseball Hall of Fame.

In his 45-year tenure at USC, Dedeaux led the Trojans to 11 national championships and 28 conference titles. A six-time American Baseball Coaches Association Coach of the Year recipient and a 1970 Hall of Fame inductee, Dedeaux posted an overall record of 1,332-571-11, which translates to a .699 winning percentage. From 1970-74, Dedeaux' teams won five consecutive NCAA championships, a record that still stands today as no other school has won more than two in a row. Named the "Coach of the Century" by both Baseball America and Collegiate Baseball, Dedeaux was named the head coach of the All-Time College World Series Team during the 50th anniversary celebration of the event in 1996. A true ambassador for the sport of baseball, Dedeaux was presented with keys to the city of Omaha in 1999.

Is it me, or does college baseball (even with all the ESPN coverage the past few years) just not seem relevant anymore?

I mean it is not even close...Dedeaux is THE legend in college baseball, just like many will say Wooden is in college basketball.

It hard to argue the talent that Dedeaux amassed in legendary career that made it to the big show.

This is not only well deserved but also long overdue. I am surprised that USC didn't push Omaha to get this HOF up and running sooner. What an awesome recruiting tool this could be...another feather in the cap!

Better late never I guess....but not by much.