The legendary owner of the Lakers was a USC alum, donor, and former faculty member.

Share All sharing options for: Jerry Buss '57 Dies At 80.

Along with all his success with the Lakers, Buss was a proud member of the Trojan family. After graduating from the University of Wyoming with a bachelor's in chemistry, he received a scholarship from USC for graduate school and moved with his wife JoAnn to Los Angeles. In 1957, at the age of 24, he graduated from SC with a master's and Ph.D in chemistry, and later became a faculty member of the USC chemistry department. In 2008, he donated $7.5 million to USC to name and fund two chairs in the chemistry department and a scholarship fund for graduate chemistry students so others could follow in his footsteps.

When he became the owner of the Lakers in 1979, he decided to bring a little piece of SC to the Fabulous Forum. He went to Dr. Arthur C. Bartner and asked him if brass members of the Trojan Marching Band could perform at Lakers games. Bartner agreed, and the Laker Band was born. Consisting of nine trumpets, seven trombones, a bass, and a drum kit, the band consists of TMB alumni and now resides in section 308 of the Staples Center at every Lakers home game, including the playoffs and the Finals.

The Lakers won ten NBA titles under Buss' ownership, and in 2010 he was inducted into the Basketball Hall of Fame as a contributor to the sport. He passed away early this morning after a long fight with cancer. He is survived by six children. Jerry Buss is seen as one of the all time greats in L.A. sports history and one of USC's greatest alumni.

Fight on, Jerry. Rest In Peace. 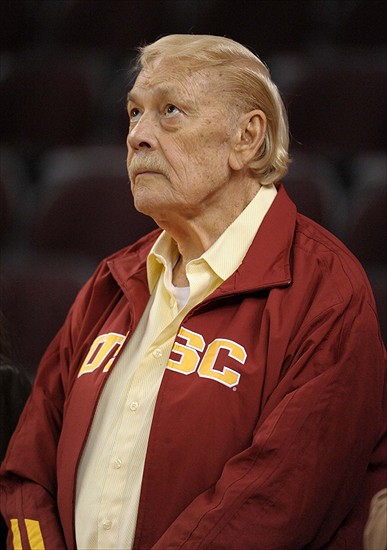 More on Buss' legacy at