Adam Landecker breaks his slump to give the Trojans a dramatic first win. 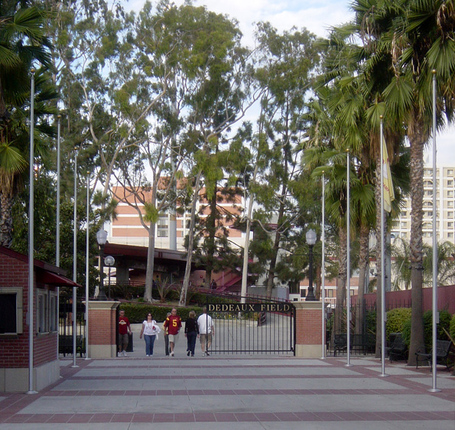 After starting the season off with two losses, Trojan Baseball returned home to Dedeaux Field for a Sunday matinee home opener against the Nebraska Cornhuskers. Down a run in the bottom of the ninth, the Trojans earned the first win of the Dan Hubbs era with four hits, the last from struggling infielder Adam Landecker.

USC got on the board first in the 2nd inning, thanks to a sac fly RBI by third baseman Kevin Swick that drove in DH Jake Hernandez from third. Freshman lefty Kyle Twomey made his collegiate debut today, and got off to a great start with only two hits and a walk allowed through five innings. But in the sixth, Nebraska finally figured him out and drove in three runs on four hits to take a 3-1 lead. Twomey finished the day with 6.1 IP, six hits, three earned runs, and four strikeouts.

Another freshman, Kyle Davis, came in as a reliever for SC and through 2.2 innings made two strikeouts and only allowed two hits. In the seventh, Swick made another base hit, and left fielder Timmy Robinson drove him in with a deep RBI off the center field wall.

In the bottom of the ninth, with one out, right fielder Vahn Bozian got the rally started with a base hit, and Swick followed with a double to put runners in scoring position. Sophomore catcher Garrett Stubbs then came up to bat and hit a fly ball into left field that just stayed fair and was caught by Nebraska's Ty Kildow. Pinch runner Conner Sullivan sprinted in from third and beat out a short throw to tie the game.

Then came Adam Landecker, who had only made one hit in 13 at-bats over the past three games. He sent a fly ball into the gap in left center that just came short of landing in Kildow's glove, allowing Swick to run home and give the Trojans the victory. Davis received the win for the game.

Up next for the 1-2 Trojans is a Tuesday night home game against Loyola Marymount. First pitch is at 6 PM.