Here is the first official depth chart of the 2012 season for the Trojans, which was released yesterday. 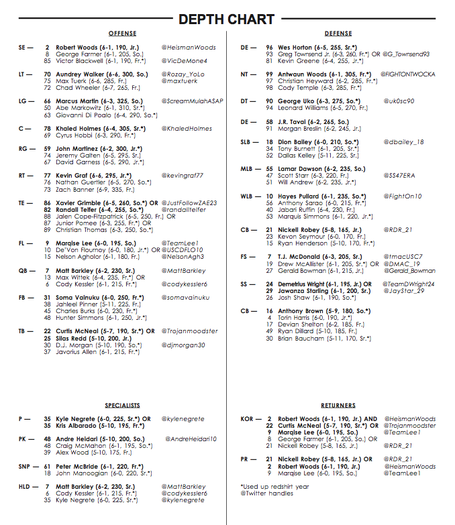 Here are a few, quick thoughts on the depth chart.

What We Still Don't Know:

There is still no clear backup to quarterback Matt Barkley. Both Cody Kessler and Max Wittek have been praised for their play during fall camp --- in practice and during the scrimmages. For most of fall camp, though, Kiffin has remained mum about his stance on naming a backup. After Sunday's practice, however, the third-year coach said he will name a backup on Tuesday.

As noted at the beginning of fall camp, the No. 3 wide receiver job is still up for grabs as De'Von Flournoy and Nelson Agholor are listed as co-backups to Marqise Lee at flanker. George Farmer is listed as the backup to Robert Woods at split end. So, we're looking at a three-man race between Flournoy, Agholor and Farmer, still. Flournoy and Agholor look to have the leg up if Farmer's injury concerns and durability issues persist.

It was interesting to see running backs Curtis McNeal and Silas Redd named as co-starters. Don't read too much into this information, though. For USC, it's not really a bad problem to have in figuring out how to split carries among the two. Still, according to Joey Kaufman, Redd expects McNeal to get the starting nod on Saturday against Hawaii.

What To Watch For:

With Isiah Wiley being ruled academically ineligible for the season, the No. 2 starting cornerback opposite Nickell Robey is Anthony Brown. But what will be an interesting development as the season plays out is whether Torin Harris can reclaim the starting role before his shoulder injury. Keep an eye out on freshman Kevin Seymour, too, who had a strong fall camp.