Judge orders the NCAA to turn over emails to McNair

Share All sharing options for: Judge orders the NCAA to turn over emails to McNair

Looks like things have been plodding along with Todd McNair's lawsuit against the NCAA. The judge ordered the NCAA to turn over ALL relevant documents pertaining to the Reggie Bush investigation. Not just emails that specifically pertain to McNair. There is no hiding for the NCAA at the moment. 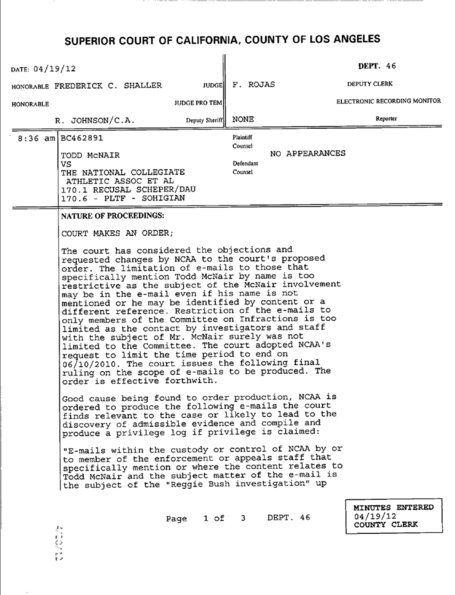 Hard to know where this will end up, but I suspect that McNair will take a settlement and that we will never know the full extent of the NCAA's heavy handedness.

Here is the Bio on the Judge.

Judge Frederick Shaller is a graduate of the University of Southern California, where he completed an undergraduate degree in English with a minor in psychology. Next enrolling as a law student at Loyola Law School in Los Angeles, he received his J.D. in 1979.

That is really all you need to know.

I heard the NCAA was judge shopping, but who really knows. I think it is pretty clear that the NCAA will try to get this judge removed based on where he went to school. Then again, I doubt few, if any, California judges will rule in favor of the NCAA, many want to see this play out but, that's just me.

This could get real interesting...