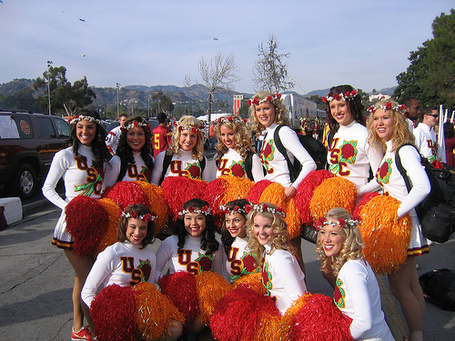 Cruz Gets To Work
It's Monday afternoon. USC baseball coach Frank Cruz is trying to finish up a day's worth of work. He leans back in his office chair and looks out onto Dedeaux Field before rubbing his eyes and letting out a yawn. You'll have to forgive Cruz, he's had a pretty busy 10 days.

USC will be watching to see how Ohio State fares
About the only thing the NCAA didn't do when it slammed Southern California's football program with penalties was ban Traveler, the Trojan horse, from the Los Angeles Memorial Coliseum. That might still happen if those connected to USC and the Pac-12 Conference don't tone down their rhetoric a bit.

CFN: Ohio State & Tressel - The Hits Keep Coming
How much more can the Ohio State football program take? From the latest allegations from Ray Small, to the cover of ESPN the Magazine, to a reported Sports Illustrated piece that's being put together, the body blows keep adding up. Can Jim Tressel keep weathering the storm? Four CFNers give their opinions on the nightmare that won't go away.

Washington State Evens Series With USC, 10-2
Taylor Ard's two-run homer sparked a seven-run fourth inning Saturday as the Washington State Cougars evened its Pac-10 Conference series with the 10-2 win over the USC Trojans. Junior lefty Spencer Jackson (1-2) picked up his first win of the season for the Cougars with 3 2/3 innings in relief, allowing only one run on four hits.