As we know Pete Carroll has been on his book tour the past week. He was in NYC on Tuesday and then Ridgewood, NJ on Wednesday. Rigdewood is a quaint little enclave that is home to some very exclusive property...it isn't Upper Saddle River or Franklin Lakes but it is pretty close. It is 15 minutes from where I live so it was a quick trip to see PC...and Cush.

When I arrived right around 7pm Cush was outside the book store with his dad and his high school coach from Bergen Catholic. Cush was actually getting ready to leave but he took the time to chat with me about the last time I saw him at SC the week of the Notre Dame Game in 2008. He looked relaxed and I could tell he was ready get back to camp to get ready for the upcoming season. He has a lot to prove...and he knows it.

Here is my Pic with Cush outside the bookestore... 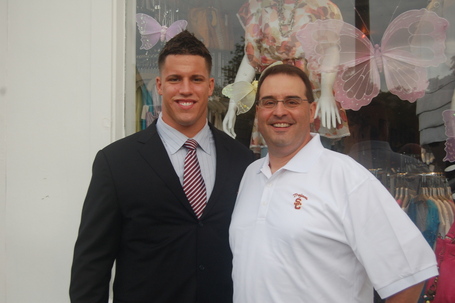 Cush was gracious with his time as he was getting ready to head over to another benefit and was happy to take a few pics.

Once inside you had to by a book first before heading down to where PC was signing his books. There was a significant crowd already there. There was plenty of representation from Trojan fans, Jets fans and Seahawk fans. Mothers, fathers, daughters and sons of all ages were there to say thanks for the past and good luck with the future. PC did not refuse a single request to sign anything put in front of him or take any picture.

PC had the crowd fired up. He steadfastly supported the school and their endeavors with regards to the appeal. He also supported Reggie Bush...I am not surprised and I really don't have a problem with it. He has a relationship with his players that we couldn't possibly understand having not been there ourselves.

He is excited for his new chance in the NFL...and I hope he makes it.

Here is my pic with PC at the book signing... 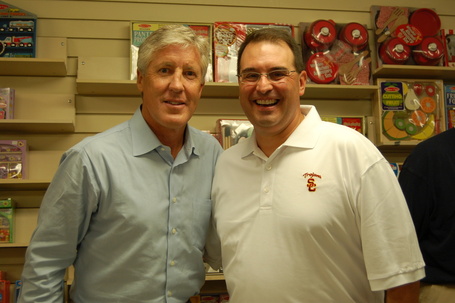 As I noted back in 2008 Pete Carroll and I have a mutual acquaintance with Dr. Steve Nicholas former team doctor for the NY Jets (whom I work with on occasion) so once I reminded him of our last visit and our acquaintance he remembered me. He reiterated to me to tell Dr. Nicholas that he didn't need any fake knees!

I got a chance to talk to a lot of other Trojan fans and turned them onto CC. I was surprised to hear how many people out here still read Wolf's site...I told them that Wolf could not be more misinformed or anti-USC in his reporting. I don't deny that I am big USC homer and that our coverage is skewed in favor of the school but we are not afraid to take the program to task if we see something we don't agree with.

I said the same thing to Ben Malcomson...he is a great guy as well!!

It was great evening, everyone had a blast and came out to support PC!