Share All sharing options for: Cody Kessler Commits to USC 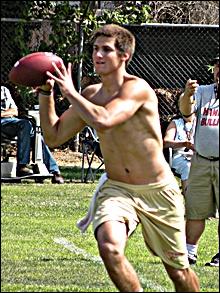 Apparently not even possible sanctions can slow the recruiting train for USC down as it keeps chugging along in full speed.

Kessler's numbers may not impress, as he had 2,195 yards and 12 touchdowns for junior year, but he missed four games due to an ankle injury. Nonetheless, he won Area Player of the Year award. He is currently ranked No. 64 in Rival.com's Rivals 100 list, which lists the top prospects in the nation.

USC now joins Mater Dei quarterback Max Wittek in USC's QB class, something to keep an eye on. Kessler knows that Max Wittek is also a top quarterback, but isn't afraid of competition. Currently, Kessler's plans are to enroll early to USC next year, a trend that is becoming common among new incoming freshman.

Kessler displays great poise and has tremendous upside as a passer who plays pro-style. He has good size at 6-2 and 225 pounds and has a nice frame. Here's Kessler on Kessler:

"I manage a game well. I’ve worked hard on my leadership and I’m good under pressure and when times are tough. I don’t force things and am good at getting first downs and keeping things moving.

"I throw everyday and I’m just working on perfecting everything. I’m working on dropping back and getting my timing better."

USC has the two top QBs in SoCal, while Westwood has none. Score now at 7-0