While some people are trying to put a brave face on some of the less appealing aspects of the World Cup - not a lot of goals, empty seats, the vuvuzelas - I feel it's important to skip over that stuff in favor of an example of FIFA's iron control over advertising from companies that haven't paid up.

Specifically: would you think that there was something wrong here? 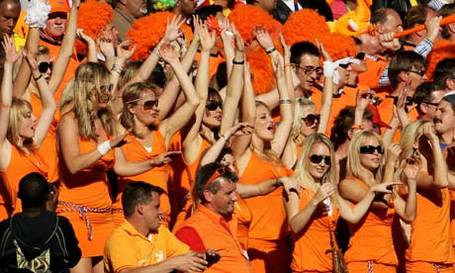 Probably not, because you're not FIFA. But they hustled these young ladies out of the stadium in which Holland was playing Denmark.

It turns out that FIFA considered this guerilla marketing, inasmuch as Budweiser has paid them huge sums for beer advertising rights, and these young ladies were shilling for a beer other than Bud.

The dresses were commissioned by Dutch brewer Bavaria (not a very Dutch name, now that I come to think of it), and launched via a campaign featuring Dutch WAG Sylvie van der Vaart modeling what was billed as an inexpensive alternative to a replica shirt, thus:

In any case, about 30 or so young women showed up at the game and proceeded to draw attention to themselves... 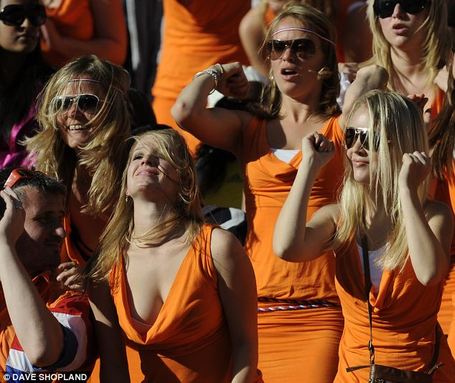 until being removed by FIFA. 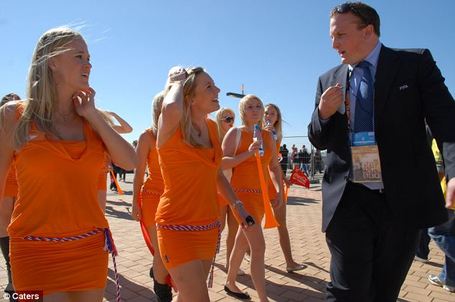 At this point, accounts of FIFA's behavior vary:

According to the women, they were surrounded by stewards, who took them to be questioned by Fifa and the police. The officers warned their mini-dressed suspects that they could be arrested for ambush marketing and spend six months in jail. Then they drove them home after making copies of their passports and vowing to investigate further.

A Fifa spokesman, meanwhile, swears blind that the miscreants were allowed to stay in their seats until the end of the game, and that they were "young South African women being used by a large Dutch brewery". Think of them as advertising mules.

In any event, FIFA are plainly no fun at all. As, indeed, are the suits at UK television channel ITV, who fired their soccer analyst Robbie Earl when it emerged he had taken his "friends and family" ticket allocation for the game and sold them on to a third party, who provided them to the young ladies above.

And yet at the same time, FIFA was apparently unconcerned at the misleading advertising undertaken by North Korea. There are people passing themselves off as North Korean fans in South Africa, but it's not at all clear that they are actually from North Korea:

After its goal, Brazil pressed. But North Korea's fans in the Ellis Park stadium drove their team on, their support being heard loud above the vuvuzelas.

Perhaps not. According to ESPN commentator, Martin Tyler, the word is that these are Chinese actors who have been hired to resemble and dissemble North Korean fans.

I know that there's nothing funny about North Korea in practice, but really, they are the gift that keeps on giving for people who miss the good old days* of airbrushing people out of pictures once they've retired to spend more time with their family. And to think they were 55 successful minutes into their signature prank of the tournament - keeping Brazil from scoring - until that fell apart.

*If by good old days you mean forced labor camps and mass executions.