Share All sharing options for: Tre Madden Commits to USC 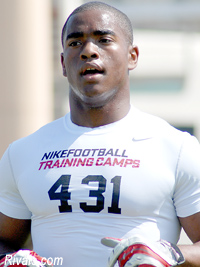 It's becoming a wonderful trend for the Trojans as they got another commitment from a top prospect, this time from Mission Viejo HS (Calif.) linebacker Tre Madden.

Madden isn't a big name in the scouting world, yet, but he's a big deal in California. The 6-1.5, 220 pounder recorded 115 tackles and 3 sacks for Mission Viejo as a junior and received numerous awards for his play including All-CIF honors.

It should also be noted that he was the top linebacker at the NIKE camp earlier this year that was held at USC, which he displayed incredible athleticsm.

Madden certainly projects as a WILL-type of backer as he's a monstrous tackler and is great in pass coverage. He was selected to play at next year's Army All-American bowl.