Presenting the Class of 2010

Share All sharing options for: Presenting the Class of 2010 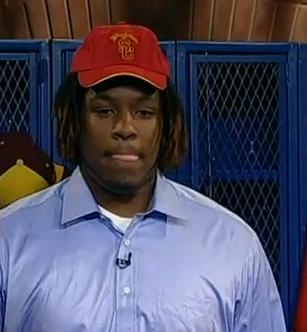 Seantrel Henderson decided, who else?

It's been a wild 364 days since the last National Signing Day.

It began by Pete and staff grabbing the big play-makers on the offensive side of the ball. Pete then shocked everyone by announcing he is leaving USC to take the head coaching job in Seattle and USC fans began to wonder if the commits would stay together. Kiffin was hired and pledged that he would recruit the best in the nation and end up with the best class of 2010. With the help of his staff, including coach Orgeron, Kiffin went out and found play-makers from California, Florida, and Minnesota.

More importantly, Kiffin kept all the commitments that were committed to USC, except for a punter.

Kiffin could not have handled the recruiting process any better. Not even a month in, he battled UCLA to get commitments from Hayes Pullard and Marquis Jackson. He kept his hopes and landed a commitment from Seantrel Henderson. He owned to his word and indeed made USC have the best recruiting class of 2010, according to Rivals.com.

USC still has a great shot of landing 5-star athlete, Latwan Anderson. Anderson informed everyone that he wasn't going to be signing anywhere on National Signing Day because he still wants to visit what he calls his "dream school." With his impressive athleticism, speed, ball skills, and coverage, Anderson is able to play safety, cornerback, and wide receiver. Anderson will visit USC in two weeks.

Questions have been raised whether USC deserves to be the number one class. Afterall, USC only has a total of 20 commitments, the lowest count out of the top five schools which include Florida, Texas, Auburn, and Alabama in order. Auburn has 32 commitments, the most. Texas was the lowest with 25, but still beats out USC's 20. Out of those 20, five are 5-star players (the most), 14 are 4-star players, and Anthony Brown being the lone 3-star player.

The truth of the matter is that USC has the better of the bunch with the most impact players. Quality over Quantity.

And now, I present you those players who will wear cardinal and gold in the fall...