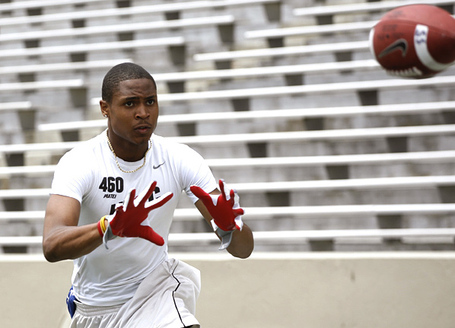 The linebacker and offensive line position is thin. For the recruiting class of 2010, it is essential that coach Kiffin and staff try to replenish those two positions. Unfortunately, the linebacker class this year is not strong. It appears day by day that USC will not meet those standards of grabbing those linebackers to help out their depth in the position.

This year's offensive line class has many play makers. While USC grabbed highly touted lineman in their 2008 class, a couple were busts and now Khaled Holmes and Matt Kalil must be able to step up as it seems they will be starting next season.

USC suffered major blows at the linebacker position last year with the de-commits of Manti "I was a Trojan the day before signing day" Te'o and Vontaze "Best LB in the Pac-10 in 2010" Burfict. They recovered with commitments of Jarvis Jones, Frankie Telfort, and Marquis Simmons only to later discover of Telfort's rare heart condition during practices and ultimately ruling out Telfort from future play. The 2009 class somehow kept its anti-linebacker disease through the 2010 recruiting class.

Having said that, USC will have one of the best classes it will ever have... On the offensive side of the ball.

Lets take a look at our commits after the jump...

This year's offensive class is incredibly incredible. It's filled with play-makers in nearly every position and can be quite a force in the seasons coming. Let's take a look at these wonders: (NOTE: I hate the star system, but eff it, I'm going to implement my own star-system the way I want it to be.)

This player should be dubbed "The next #1" (He's wearing #85). Make no mistake about it, Prater is a tall, lean, ball-catching machine. At 6-5, Prater has the size and vertical jump to catch anything that is heaved at him. His hands are freakishly large and catching one-hand grabs is not rare; Just check out this video. He wont out-run you, but with the proper conditioning drills that he will do over the next seven months; you better pre-order your #85 jersey now because they will sell out.

A man among men. Dillon is an emotional leader and will rub some of it all to others. Baxter opened his recruiting (as did most) when Carroll left the program, but a week later solidified his commitment to USC and enrolled on Monday. His running back skills are as good as anyone's, but he can add a few more pounds. He also played QB for his school and was excellent at the position, even out-performed other quarter-backs in the Army Bowl All-American practices. Having said that, watch out for the wild-cat play.

Woods and Prater are the top two wide-outs in the nation. With Woods, you get speed and great ball- catching skills. Don't be fooled by his size (6-1, 185), his leaping ability will kill corners (40 inch vertical). His route-running abilities is what breaks him away from all the other wide outs in the nation, he will confuse the heck out of corners and safeties. Will be a deep threat. I project him to be RoJo 2.0.

Has the size (6-6, 245) to be a small lineman, just to athletic to be one, though. Xavier Grimble has soft hands and will punish linebackers once he receives it. Top tight-end in the nation.

Probably the fastest out of the bunch. Morgan's juking abilities are un-matched. He was invited to the Army All-American Bowl Game but could not participate as he had a devastating knee injury. Once recovered, look for him to return punts and more.

With Xavier being the most physical, Telfer is the most athletic. Very tall and lean, Kiffin is going to be a very happy kid when he implements his top two tight-ends.

The 6-2 quarter-back is known for his accuracy and athleticism. Scouts say he has a noodle arm, but he proved everyone wrong when he showed scouts he could throw the ball 70 yards down the field. No people, that was not a typo. Matt Barkley may be the QB for now, but Lane's "clean slate" speech will bring Barkley competition.

Mid-size offensive lineman who has terrific blocking abilities on the running game.

A defensive tackle who will bull rush you with top effort. Top three defensive-tackle in the nation. Watching Uko play is very similar to that of Sedrick Ellis. He has terrific size and should see a great amount of playing time at the defensive tackle position. If only Uko played in the Stanford game...

A real ball hawk. Will have a field day when his time comes in the tampa 2. He's a safety that lacks top-speed, but his strength will over power mid-sized receivers.

My favorite recruit of the class. Wright showed everyone on national television that recruits should enroll at a school not for the coach, but for the school itself. The day Carroll departed, Wright did not flinch and wanted to be a USC Trojan. Has very similar skills and build like Bailey, but has more upside and a larger frame that may even put him as an outside linebacker.

Position player who is able to do parts of everything. He is a great tackler, great ball catching ability, great speed, lacks size.

An overweight lineman who will probably see playing time at goal line. That's a compliment.

Now for some rumors and visits from recruits:

Kiffin came to USC and quickly began his first mission, to have the best recruiting class in the nation. He kept all but one of the recruits intact, which is an incredible feat, and him and coach Orgeron are on a tear. Markeith Ambles (WR) visited USC last weekend and from the quotes I've read, he's all USC. Why should you get excited? This per scouting Director Greg Biggins:

Honestly, I would put Prater, Woods, Ambles as the top receivers in the nation in that order.

Like I said before, this year's linebacker class is thin, but that wont stop Kiffin from getting top linebacker in California, Josh Shirley. Kiffin told him he will put him at WILL, which is his natural position. Shirley had a great visit to USC and Kiffin had an in-home visit with Shirley yesterday, which he said "went great". Most of the top linebackers are in the East and we have virtually no shot at any of them. Christian Jones (Top 5 outside linebacker) was going to visit USC this weekend. But it appears that he's going to cancel. He has FSU written all over him, though.

Top lineman Seantrel Henderson is getting blitzed by Kiffin and Orgeron. Lane Kiffin is probably talking with him at his house as we speak as his in-home visit is today. Most scouts say Ohio State is the leader, but in recent days, they get a feel that it is USC. Baxter and Henderson are close friends,they met last at the player of the year award ceremony and were teammates at the Army Bowl Game. Henderson's father, Sean, even got to say that they hung out with Baxter's parents.Henderson is regarded as the best player this year.

Chaz Green is not far from Henderson. The second best lineman in the nation has been recruited hard by Florida in recent days, but is visiting USC this weekend and has USC "high" on his list. Fans worry that Green wont join USC because of Henderson. Henderson plays left tackle, Green plays right. Get that cleared people. Arie Kouandijo is also a regular 4-star lineman that will visit USC this weekend, if only our coaches will be this focused on the linebacker position.

As if we're not already stacked in the safety position, USC offered scholarships and are currently recruiting Latwan Anderson (S, Ohio) and Eddrick Loften (S, Texas), and Demar Dorsey (S, Flo). Latwan Anderson is a top-five player in the state of Ohio, regarded as the best defensive-back. He is currently committed to West Virginia, but told sources that USC is his "dream school". Watch his video, you will wish he commits. Loften is a hard hitting, ball hawk safety. He was recruited by Willi Mack Garza. Demar Dorsey is the fastest safety in the nation. A ball hawk that was clocked at 4.32 on his 40. Both will be visiting this weekend.

Second rated tight-end Christian Thomas (Cali.) will also be visiting this weekend. He has high-interest in USC and participated in the Under Armour Bowl Game. If USC gets his signature, USC will have the top tight ends in the nation. Like I've said, best offensive class in the nation.

Corner-back Nickell Robey is getting serious looks from Monte Kiffin. He will officially visit USC this weekend. Robey is the top corner for the state of Georgia, the school he is currently committed to. The Atlanta Journal Constitution blog said he wont be committing to Georgia and is open-game.

The drama with Dietrich Riley continues. He said he will make a decision after signing day. He's a safety that has a wide frame to add muscle. He isn't the fastest safety but a hard hitter and has higher upside than most safeties. It's a USC-UCLA battle for Riley.

Sean Parker is the most physical safety in the nation that has high-interest in USC. Only problem is that Michigan wont quit on Parker and that is the school most scouts think he's leaning on. Michigan - SC battle.

Here's a list of the prospects visiting USC this weekend: