We looked at OOC scheduling philosophy and how it impacts voters perception last year before the season kicked off. At the end of the regular season, our predictions pretty much came true. Not only that, we were able to explain why computers loved ACC, even though ACC didn't really stand out as a premier conference.

The following conclusions from last year, remain true in 2009 as well

- SEC/Big-12 teams schedule OOC games like cowards and inflate their records by pathetic OOC scheduling. Out of 4 conferences (B12, BT, ACC, SEC) that have 4 OOC games and out of 3 conferences that have 12 teams, SEC/Big-12 have with easiest OOC schedules which subsequently inflates their overall W/L record

- Because of the above, SEC/Big-12 teams manage to have more bowl eligibile teams than other conferences creating appearance of a strong league (which is partially justified (in case of SEC) and partially illusion (in case of Big Ten and Big-12))

- While Big East does schedule relatively tough OOC games, the toughness of OOC games is diluted by the fact that they have to play 5 OOC games.

- Pac-10 AD's just don't get it. They try to do the right thing when everyone does the wrong thing. But if they were familiar with Prisoner's Dillemma concept, they'd know that doing the right thing when everyone cheats will hurt you a lot. Pac-10 teams hurt themselves on 2 ends: one one hand by scheduling 3 OOC games as opposed to 4, they guarantee 5 losses for Pac-10 teams and in addition, scheduling tough OOC opponents results in lower expected winning % in OOC games. As a result, an average Pac-10 team is expected to have 1 less win and 1 more loss than an average SEC/Big-12. That really hurts the conference when it comes to bowl eligibility and top-25 voting.

I hope voters consider this analysis before they rush to declare Big-12/SEC as kings and ACC/Pac-10 as peasants of CFB in 2009. Just because every SEC/Big-12 team starts 4-0 in OOC, doesn't mean that the league is strong.

More on methodology as well as individual conference analysis after the jump.

Ok, what's the methodology? Similar to last years, but I made few changes following some feedback to incorporate neutral site games, championship game in 12 team conferences as well as adjust weights for home/away games so that the result adds up to 100%.

Every game is assigned a probability of winning - from 100% for a home game against a cupcake to 35% for an away game against BCS conference team (including ND). Now a cupcake is defined as an FCS school or non-elite mid-major. There is little bit of subjectivity involved when I defined what is an elite mid-major. For argument's sake I picked 10 most respected non-BCS teams coming into this season. They are:

This list is bit subjective: I didn't include any Sun Belt teams, it could be argued that Air Force, Colorado State, Southern Miss or Rice belong there, but the end result is not strongly impacted if you amend the list. Anyway, I included teams that in my opinion are significantly better than a bottom tier BCS school (like Duke, Wazzu, Indiana, Miss State etc).

The expected likelihood of winning is as below:

I believe those numbers are reasonable and make sense. They could be twisted a bit, but I don't think changing numbers will alter the results and conclusions that much.

So here are the results by each conference: 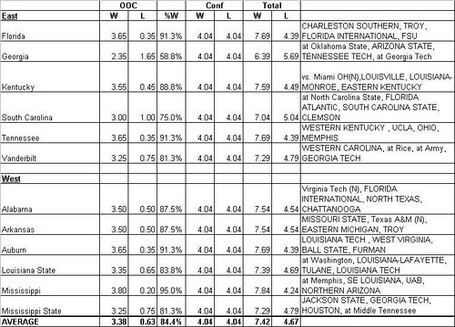 As expected, the coward conference (I am sorry, I mean essseeeseee, the Gods gift to CFB) comes out on top of expected wins per team ranking, with only Georgia having a very difficult OOC schedule. SEC teams are expected to win nearly 84% of their OOC games and it's not because the league is strong (for example, LSU has only 35% chance of beating UW in Seattle in this calculation), but because of its scheduling philosophy. Most of the OOC schedules are laughable (hello Ole Miss). Personally, I really don't understand why pay $100 to see your team trounce Jackson State or Western Carolina, but that's just me. 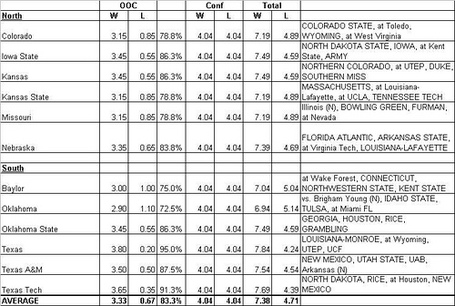 Usual offenders - Texas schools. Only Oklahoma is expected to win less than 75% of its OOC games in this analysis. Looks like Big-12 North teams continue to follow Bill Snyder's philosophy of scheduling cupcakes and getting to bowl games. 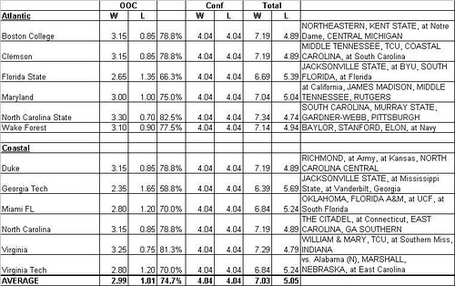 The bigest problem with ACC scheduling is abundance of FCS schools. What's with the State of North Carolina? NC State, Duke, and North Carolina are playing 2 FCS schools each!!! On the other hand, there are plenty of interesting OOC games. GA Tech (toughest schedule among ACC schools) plays 3 teams from the SEC. 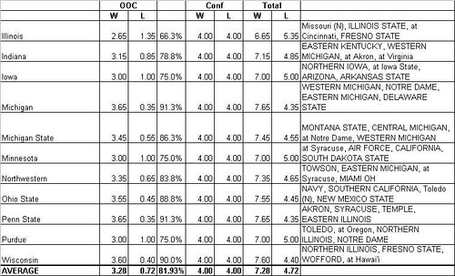 The laughing stock among BCS conferences never learns. Big Ten keeps scheduling cupcakes (82% expected winning % in OOC schedules) and continues to get destroyed in the bowl season. At least the AD's know the rules of the game. Schedule as much cupcakes as possible, win 2 conference games and get bowl eligible. Doesn't matter if Big Ten goes 1-6 in the bowl games. They still send 7 teams bowling. Big Ten needs to add some meaningful OOC games (and win them!) to be taken seriously. Man up and play some SEC schools!

Oh yeah, the Pac-10, the real men of genius. The conference of masochist AD's, the conference previously led by the biggest tool in BCS world - Tom Hansen, the conference of self-proclaimed righteous heros, the conference of "we do things right, but no one notices" fans (INCLUDING MYSELF!!!). Hey AD's, lets keep scheduling 3 OOC games when no one else does. Never mind that 9th conference game guarantees 5 additional losses for the conference, thus diminishing any chances of having 6 or 7 bowl eligible teams or getting that second damn team to a BCS game. Never mind that since inception of 9th conference game, Pac-10 hasn't had 2 BCS teams, while Big Ten (while being a joke of a conference) regularly gets 2 teams in BCS almost every year. Lets keep scheduling tough OOC games and then wonder why we only have 5 teams in the post-season. If only Pac-10 AD's sat down and went through the numbers... Oh well, that's a wishful thinking