Everything Old is New Again: Oregon

Share All sharing options for: Everything Old is New Again: Oregon 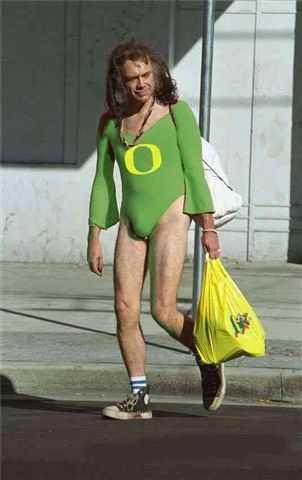 Rare recent photo of Phil Knight. This is what happens kids when you promise your alma mater hundred of millions and a recession hits.

An absurdly early look at the 2009-10 Pac 10 Basketball season. Each team will be scrutinized in a ruthlessly clinical fashion, and a final post will wrap up the predicted final standings at the end of the season. For no particular reason I decided to go in alphabetical order, so up now are the woeful (but for how long?) Oregon Ducks.

The Lowdown: Trying to predict how Oregon will do next year is like trying to take the angry out of bees... its just not happening. This coming year's flock of ducks is an interesting group, one born under a sign of potential yet without any truly dominant talent or any dominant returning players for that matter. Sure, Tajuan Porter, Joevan Catron, Michael Dunigan, Lekendric Longmire, etc... could all be "the guy" but it seems as though they are all hesitant to step up and assume the mantle of leadership. Well someone has to, there is no under-achieveing yet still awesome in a subdued way Malik Hairston, no ultra efficient Maarty Leunen, and no sure & steady Bryce Taylor to fall back on. And for the love of Mike it has been nearly two years since Aaron Brooks has donned the giant yellow O. Basically, Oregon last season (and potentially next season too) was a bunch of pieces that did not quite make a sensible and more importantly the team lacked a star that could force them to fit together anyways.

So whither Tajuan Porter? Supposedly the diminuitive combo guard was going to be made into a point guard and take over ball handling duties for the team, but I think by this point it is clear to most that Porter's basic essence is to score and that any dishing or passing (assisting, as it were) would only come as a result of seizing momentary opportunities. For the sake of next season its important for the coaches to let Tajuan just be what he is, a volume scorer with a reckless streak. And of course, they need to have him switch on defense, otherwise they will get owned. Actually, Porter should be the least of Ernie Kent's concerns as getting something out of his cast of underachieving talent.

I mean, what is the deal with Michael Dunigan? He was a force on the court, but the way the dominance would come and go was almost spectral. OK OK, the reasons why Dunigan was not much of an impact player are not nearly that mysterious as he could never stay in the game. On the season, the freshman center averaged a foul for about every 6.8 minutes he was on the court, and he had an annoying tendency to pick up fouls in rapid succession which lead to frequent bench time despite Oregon's lack of height and front court depth. But even when he was on the court Dunigan had really subpar shooting percentages for a big man, and he needs to add efficient scoring to his efficient rebounding and shot blocking. And what to say about the other front court key, Joevan Catron? Catron has some nice moves in the post, but he fails to truly assert himself or make use of his relatively advanced skill set. Joevan is a truly frustrating player to be sure, and at this point in his career (he will be a senior next year) he should be more of an impact player.

I have to wonder aloud if OU fans will tolerate another mediocre season from Ernie Kent. In all honesty I think Kent is a pretty good coach, but some strange recruiting have resulted a bit of a patchwork team. Word is that new Oregon AD Mike Bellotti is good friends with the embattled hoops coach, but with a team that could finish as high as 3rd and as low as last, its hard to say if even the AD can spurn the masses if they begin calling for blood. Oh well... here's to next season Ducks fans!

Magic 8 ball says: "Will Oregon finish in the top half of a watered down Pac 10?" "Outlook not so good."