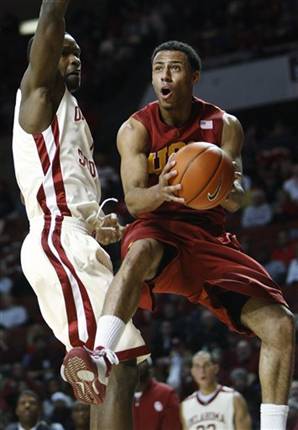 Although shooting guard Dwight Lewis has played somewhat erratically this season, in a hostile road environment on the road against Oklahoma he kept SC in the mix late into the game. The junior tied Sooner Blake Griffin with 25 points to lead all scorers, and connected on 3-4 shots from behind the arc to go along with a perfect 6-6 from the free throw line. Although SC lost the game 72-71, it was great to see Lewis play up to his potential by shooting with confidence and leading his team against a talented OU squad. Dwight also had a big game in another tight loss against Michigan State.

4. Taj Gibson "Finesses" His Way to a Perfect Game

Taj Gibson has been one of the steadiest players throughout the entire season, but really showed the ability to step up and dominate with aggressive play. Gibson logged 24 points on 10-10 shooting (including a pair of earth shattering dunks) to go with 6 rebounds and 5 assists. Not only that, but he also imposed his will on defense with 3 blocks on route to helping the team hold BC to only 32.7% shooting. The spectacular performance made the three year starter one of only four players in tournament history to have perfect shooting nights with at least 10 attempts. I wonder what Josh Southern had to say about west coast toughness after this game?

3. Marcus Johnson Shows No Regard For Human Life

The single best dunk of the season came courtesy not of the Vince Carteresque Demar Derozan, but instead from fellow super athlete Marcus Johnson. Although the Senior transfer from UConn may only get to play half of one season, he definitely left his mark on the program with this spectacular play. Although Johnson wasn't the same after injuring his shoulder, his play early in the conference season was crucial in wins over Stanford, Cal, and Washington State, and his combination of quickness and length continued to bother opposing teams after his return. Now it is up to the NCAA to determine if he will play another season as a Trojan.

Top 2 after the jump!

2. Hackett Comes Through Against the Arizona Schools 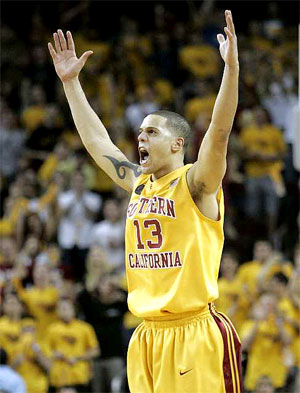 Hackett's stats simply don't do him justice for this pair of games. On the home stand he scored a paltry 15 points on 4-14 shooting, but his play was crucial to both victories. Against the Sun Devils Hackett held the Pac 10's leading scorer to 4 points on 0-8 shooting, which prompted a chant of "ZERO POINTS! ZERO POINTS!" from the student section when Harden got to the line late in teh game to shoot a pair of free throws. Two days later the junior PG drove the ball up court in the waning seconds against Arizona and drew a foul from Jamelle Horn which allowed him to score the game's final point giving USC the 65-64 victory. Hackett would continue to make clutch plays and became the go to option in late game situations.

1. Demar Derozan Throws Down against UCLA and Leads USC to a Pac 10 Title

What more is there left to write about USC's improbable run to their first Pac 10 tournament title? Derozan was at the absolute top of his game and played like a future all star on his way to being named the tournament's most outstanding season. More importantly, the team as a whole finally played up to their potential and salvaged an often frustrating season. On the whole though, Derozan deserves a ton of credit for the team's post season success and may have played himself into the top half of the lottery.