Pac 10 Roundtable: Top of the Pops

Share All sharing options for: Pac 10 Roundtable: Top of the Pops

I think I am going to keep on doing these on Sunday. Its hard to find the time to think about and answer the questions during the week, and usually news goes dead on the weekend anyways, so why not?

1. Is it too early to start thinking about the NFL draft? Tell us about one of your players expected to go in this year's draft.

This one is kind of tough because just about every major SC draft prospect has been talked about ad nauseum, so let's look at a less hyped player that has kind of fallen off the radar thanks to late season injuries: Kevin Ellison. Taylor Mays may get all the hype, but many fans and close followers of the team think Ellison is just as good of a player. Although he doesn't have a single stat that really jumps out and wows you, he boasts a very solid body of work with decent numbers in INTs, tackles for loss, and pass breakups. In addition his size (6'1", 220 lbs) and speed will give him an edge in the transition to the NFL. Plus, talking about number four gives me another excuse to put up this clip:

If anyone answers anything other than James Harden, I am going to have to respectfully disagree. His stat line of 21.6 PPG, 5.5 RPG, and 4.2 APG along with shooting 58.6 eFG% is absolutely ridiculous for a team that plays as slow as ASU does. To add to that, there are only two players in the country playing in a major conference who have a better offensive rating, and that's Nick Calathes and Jodie Meeks who play somewhat abysmal competition in the SEC. Outside of maybe Blake Griffin or Stephen Curry there is no other player who is as crucially important to their team's success as James Harden.

3. Football season is over, no one cares about basketball anymore because Oregon is 0-12. How is your school doing in sports that may not get the publicity that Football and Basketball get?

More after the jump

4. Give us a random fact about your University that people may not know. The more juicy and scandalous, the better! Extra points for it being true!

Uhhh... OK. Well there is a story that the campus tour guides tell people visiting the campus that is kind of interesting. The claim was that Rufus von Kleinsmid's wife was unhappy that the Waite Phillips Hall (WPH) was taller than the Von Kleinsmid Center (VKC), and wrote a check demanding that it be fixed as her recently deceased husband had requested that the building of his namesake be the tallest on campus. The way the university fixed it was by putting a metal globe on top. 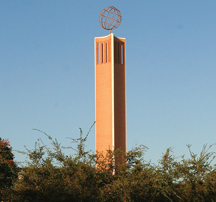 However, apparently this is the real story:

The Legend: The story goes that the globe-shaped finial was placed atop the Von KleinSmid Center after Waite Phillips Hall of Education was erected because Chancellor von KleinSmid was disappointed that his namesake building’s carillon tower would not be the tallest structure on the campus.

The Skinny: Without a doubt, the indomitable Rufus Bernhard von KleinSmid had no intention of leaving anything short of a larger-than-life legacy at USC. Tony Lazzaro, USC’s associate business manager and director of campus development at the time, saw a metal orb on one of the buildings at the 1964 World’s Fair in New York and proposed a similar structure as a finishing touch for the tower. President Topping and other university administrators concurred, and the finial was added in 1966, one year after the Von KleinSmid Center opened and two years before Waite Phillips Hall was completed in 1988.

But here's the thing, Rufus von Kleinsmid died in 1964, so I guess the mystery continues...

5. Ragnarok over at the California Golden Blogs wrote this magnum opus about a Faustian re-organization of college football entitled "A Total College Football Reorganization."

So, what are your thoughts on his seemingly controversial re-org. Moreover, what does Faustian mean? I just google important sounding words to get a vague appreciation of them and then put them into sentences in places where they seem like they might make actual sense. Hope I "NAILED IT" with this one.

Wow. Shameless shilling of your own blog, inappropriate use of quotes, and misuse of the term faustian. The meaning of Faustian relates to the old german folk tale wherein Faust sells his soul to the devil for knowledge. When someone says something is faustian they are saying it is short sighted, or that it is a decision that is tragic or will come back to haunt that individual. Maybe Ragnarok's plan is faustian after all, but we'll never find out as it will never happen, at least in the forseeable future.