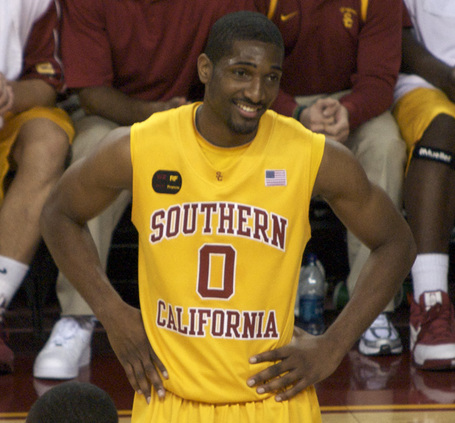 UPDATE: A better quality Marcus Johnson Dunk video can be found here. Click on "watch in high quality" for the full effect.

Well let's start with the negatives from last night for the Trojans. USC didn't shoot particularly well from beyond the arc, only going hitting on 2 of 8 attempts, and the Trojans could not get it done from the charity stripe as they shot only 17-29 as a team. SC also commited to hedging too early on ball screens which allowed Jordan Wilkes to be open all night in the high post for easy jumpers and drives to the cup. And that is actually all there is to complain about... so now for some shameless homerism!

The team really won the game with their defense and although it has been repeated ad nauseum it is worth repeating that SC held the nation's best 3 point shooting team hitting on a 47% clip to a measly 2 for 16 from the outside (which is 12.5% FYI). Perhaps even more impressive is that after last night's game the team now ranks among the elite defensive teams in the country rated at 16th in Ken Pomeroy's efficiency statistics. As USC heads into the toughest part of this season's schedule (with the next three games on the road against ucla, Arizona, and ASU) they are really going to need to rely on their D to keep games winnable, but fortunately the offense has started to come along as well after ranking in the 120's in offensive efficiency earlier in the season. This makes USC somewhat unusual, as most schools tend to play a bit worse on offense once they begin to play tougher teams in conference.

More after the jump

Whoever said that Tim Floyd's style of play is boring to watch? The pace may be a bit slow, but there is certainly no shortage of big time plays and eye popping athleticism. Case in point, when Marcus Johnson and Demar Derozan are on the floor some of the plays turn into a high flying trapeze act. In fact, on at least three occasions the ball was sent up to Derozan on an alley oop, and although he only converted one with a dunk he grabbed his own miss for a put back on another and got to the free throw line on the third. And this doesn't really need any commentary:

But the high flyers weren't the only ones making spectacular plays. Daniel Hackett hit a nice buzzer beater before the half for a bit of a cushion heading into the locker room, and later on he hit on a spectacular reverse high off of the glass in traffic. And stalwarts Taj Gibson and Dwight Lewis also had nice nights with both players scoring a quiet 12 points and Gibson pulling down 13 boards.

USC's bench has also started to come up big. Nikola Vucevic had 4 points, 4 rebounds and an assist in 11 minutes of play, and even the maligned Donte Smith did a nice job in limited time by forcing two turnovers (including a steal to breakup a fast break) in only 5 minutes of play. Even Leonard Washington, who started but only played 16 minutes due to illness, got his with 6 and 6 while showing off some nifty power moves to pick up shooting fouls while still cleaning up on the defensive glass. And all of this without key reserve Keith Wilkinson seeing any minutes.

USC is now in sole possesion of third place, and first place along with an NCAA tournament bid are within reach. With nine games to go in conference USC is actually in control of their destiny, and a win at Pauley Pavillion would continue to improve the confidence and momentum this team has already built up. After a frustrating start the team has really hit their stride, and I don't think its unreasonable to start expecting the team to pull out some clutch wins as the season begins to wind down. Floyd is 12-1 at home this season, and now its time to get some revenge on the team responsible for the sole home loss. One group of bears down, one more to go!

FIGHT ON and BEAT THE BRUINS!!!