I hope everyone had a great holiday yesterday. I kind of took some time off of the blog to enjoy family and friends and to finish out the work year. So, lets jump right into tonight's season finale!

It has been fun to listen to and read how much joy people are taking by dancing on USC's grave. Whether it is the local or national media/press who are taking a skeptical view wondering if SC will respond tonight with a solid performance or if it is our rivals and detractors who would love nothing more than to see USC hammered either on the field or off the field by the NCAA (you know Troy will fall blah blah blah).

The question is which USC team will show up tonight?

As of this writing there is still no news on Joe Mckight's status for the game.

But I did notice an interesting take on the attitude of the coaching staff (read PC) from Wolf this morning.

This is exactly the kind of situation in which USC needs Pete Carroll's optimism to buoy its spirits as it stumbles toward the season's conclusion in a bowl game it never imagined being involved in.

But the normally sunny Carroll made a startling admission this week.

"I'm anxious for the season to end," he said.

That might be an unremarkable attitude for some coaches, but Carroll survives on enthusiasm and that's not the recommended attitude as USC (8-4) faces Boston College (8-4) at 5p.m. today in the Emerald Bowl.

Even Carroll is human, however, and he wants to close his worst season at USC since 2001.

"It's been a long season," he said. "We've had some rough spots. I'm ready to get started on the next one."

It is hard just what to make of those statements.

I can't remember the last time I heard Pete Carroll make that sort of statement. With PC, it is usually about the here and now but it is hard to not to understand that even the most optimistic person could end up feeling daunted after all that SC has gone through this season.

It all goes back to Sanchez leaving for the NFL. I stand by my opinion that PC knew exactly what he had in Corp and Mustain and that with Sanchez leaving it would put a ton of pressure on Matt Barkley when he enrolled early at USC. He knew with Sarkisian leaving and without a defined chain of command on the offense that the writing on the wall that it could be a tough season ahead. With all the talent lost on the defense and with all PC was going to have to do in regards to keeping a firm hand in the offense it is easy to see now just how things could unravel and unravel they did.

With the pressure off and with SC playing in a lesser tiered bowl game that most really could not care less about, this is just the sort of atmosphere that could help get SC back on track for next season.

The funny thing is even some of USC's detractors form this past season aren't necessarily ready to write USC off yet. 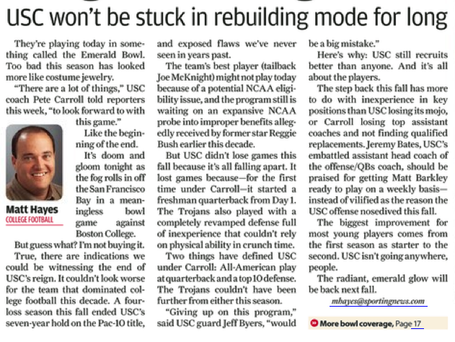 Now, remember this is the same guy who said Barkley was going to fail against Ohio State. Opportunistic??

Today's game to me is less about winning or losing and more about what type of tone the teams comes out and sets. Don't get me wrong, I want to win this game but I am also interested in how Pete moves the chess pieces on the board for next season.

That means some players are going to get an opportunity to see some action today and get a jump on next season...

One of those is Rhett Ellison.

USC sophomore tight end Rhett Ellison primarily operates in the background, but he will be the Trojans' only healthy player at his position today in the Emerald Bowl.

Ellison will start against Boston College because senior starter Anthony McCoy is academically ineligible and sophomore Blake Ayles is out with a knee injury.

"It's just been more work and more fun," Ellison said. "I'm used to practicing a lot because guys have been hurt all season. But it's definitely exciting knowing I will get to play a lot."

Ellison said the Trojans were not experiencing a letdown playing in the Emerald Bowl after four consecutive Rose Bowls.

"Especially since we've come up here for practices, there's been a lot of new energy and everyone is fired up," he said. "I think guys are pretty excited."

It also means that if Ellison has a stand out performance tonight it would give him a leg up on the starting job next season with Anthony McCoy graduating and with Blake Ayles struggling to see the field because of injury and performance.

Another player is Allen Bradford...

Allen Bradford would have preferred a more traditional ascent to the No. 1 spot on USC's tailback depth chart.

Bradford went from No. 3 to No. 2 after senior Stafon Johnson suffered a season-ending throat injury in a freak weightlifting accident in September.

On Tuesday, with Joe McKnight's status for the Emerald Bowl undetermined, Bradford rose to No. 1.

After a windy midday practice at City College of San Francisco, Coach Pete Carroll said Bradford was on track to start Saturday against Boston College. "Allen would be the first guy going," Carroll said.

If anyone deserves the opportunity it is Bradford...

Like said the pressure is off for some, because this is not a big time bowl with whole world watching, so Pete Carroll has a new and different battle to fight...indifference.

There have been a few game previews written on this game but this one really stands out...

In case you were wondering, this really hasn't been Pete Carroll's finest team, and I'd label this a rebuilding year. Last year's quarterback, starting defensive tackle, and all three of their linebackers went in either the first or second round of the NFL draft. That means for the first time in a while Coach Carroll actually had to develop some talent instead of just rolling the ball out on the field. If you remember him from his Patriot days in the NFL, that's not really his strong suit.

Now, remember this is written by a guy in Boston who probably harbors a lot of ill will towards Pete Carroll from his New England Patriot days so you have discount much of what he says...the guys a hater pure and simple.

When USC runs: Advantage BC

But as we all know, on defense it's a group effort for the Eagles, and the key to stopping the run is that everyone plays their gap. This allows Marcellus Bowman to roam free and make tackles in space. BC ranks 16th in the nation in rushing defense, only allowing 104 yards per game on the ground. How they've accomplished this without the services of Mark Herzlich is a true credit to Coach Bill McGovern and Coach Spaz's scheming.

Interesting that this guy uses stats to make his argument.

OK, hold that thought for one minute...

Perusing a few of their games you can see that they shut down the running games of both Northeastern and Kent State...real power houses there but when they went up against Va. Tech the gave up over 230 rushing yards? OK, so what gives?

Here is a little more...

When BC passes: Advantage BC

Can Dave Shinskie make this defense pay with the play action pass? The Trojans' safeties and cornerbacks are very slow on the uptake, and seem to be constantly running on their heels. It's almost as if the defensive coaches for USC understand their secondary's shortcomings, and allow teams to dink and dunk down the field on them.

USC's secondary only had seven interceptions on the season (the other three were from their linebackers) which shows two things - they don't rush the passer well and they play very soft coverage.

USC does not rush the passer well?

OK...lets move on from that we know SC is more than capable of rushing the passer, they just out worked against some pretty good Pac-10 offenses. It happens..

But, back to that thought above...

What happened to using NCAA rankings to justify your position? Here are the related rankings for when BC passes:

Remember what I said about competition above...

The ACC struggled this season...we all saw some pretty ugly games.

So, the question remains How is BC going to torch SC's passing defense when BC's passing offense has played aginst some pretty inferior talent? You can use stats to bolster any argument but in the end it is all about who you play. BC didn't play that great a schedule. When you look at the games they've won, BC does not have one win against a team with a winning record and the only solid team they did beat was North Carolina who ended the season at 6-6 and UNC is going to a bowl game.

They didn't play a great against Notre Dame either. The two teams only common opponent.

Here is a bigger issue...the guy under center who runs the BC offense has been pretty sporadic...

But it all comes down to Shinskie's play. His final exam on the football field will be graded pass/fail. In five road games this year, Shinskie is averaging 131 yards per game with only three touchdowns against seven interceptions. In his last final five regular season games, he threw ten interceptions and only five touchdowns. That might get it done against the Virginias and Marylands, but USC's offense has big-play ability, which could result in some quick scores.

Truth be told Shinskie has not had a great season. It was mentioned above that SC won't get pressure...that is a mistake. If SC keeps Griffen on the line and not drop him into pass coverage he will get some pressure on Shinskie who has a habit of throwing a drive killing INT...he went 17/35 with 1 TD and 3 INT's against a below average Notre Dame defense so whats that telling you?

I mean come on...Shinskie is a freshman just like Barkley...OK a 25-year old who gave up baseball to take a stab at college football. He may be more mature but it sure doesn't show in some of decision making skills. He has numbers similar to MB with 14 TD's and 13 INT's.

Yes, USC has a down year when measured against the past seven but lets not get too crazy. Out side of his take on USC's passing game, the only thing this guy really got right in his write up was questioning whether or not USC will show up for this game. If they do BC will have a tough time, If SC doesn't and there is always the chance of that as we have seen it before then this is a close game.

Here are a few other write ups form various places...

Emerald Bowl and the Big Finish - BC Interruption

Toss Up: USC, BC and the Emerald Bowl - BC Interruption

I will have the game thread up later today!