I don't know about you, dear readers, but I've had just about as much as I care to read about epochal shifts, historic beatdowns, and the like.

Shit, it's so bad Plaschke almost wrote a couple of paragraphs with more than two sentences yesterday. That's baaaaaaaaaaaad.

So. As we've been hashing over the offensive lacunae of this season, there's been some speculation that part of the problem is the "Running Back by Committee" approach to life. I decided to put together the stats for 2001 - 2009 (to date), to see if they told us anything. The graph is after the jump...

The challenge was trying to figure out how to display this - so what I did was to pick the backs per a given year that had combined to gain roughly around 60% of the net positive rushing yards and break out their contribution relative to the rest of the team. Generally that means we're specifying 2 - 3 backs per season: 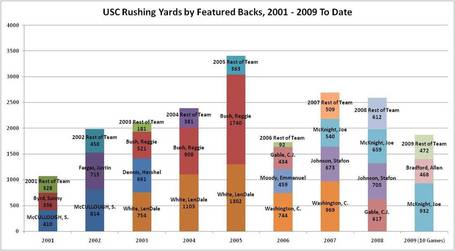 What I took away from this was the following: