Which Transitions Really Make a Difference?

Share All sharing options for: Which Transitions Really Make a Difference?

Given the rather ho-hum - by Pete Carroll standards - performance of the football team so far this year, there's been a lot of back and forth here, there, and everywhere about what are the reasons. Plainly having a freshman quarterback and a lot of attrition on the defense is part of it, as have been the changes on the coaching staff.

But in the middle of the various conversations about whether Bates is in over his head, or whether Pete Carroll should bring back Norm Chow, and suchlike, I thought I would look and see if there are consistent patterns in the basic stats that correlate to significant coaching or personnel changes. The stats suggest that it's both the players and the coaches, and one could even argue that it's the players' level of talent and experience that matter more. It's not definitive, but take a look after the jump:

All I've done so far is look at the basics, as taken from the historical stats provided on the AD web site.

First, rushing and passing. There's no one great way to represent this, so I settled for stacked columns because it gives a good idea of the arc of total offense and defense over the years. 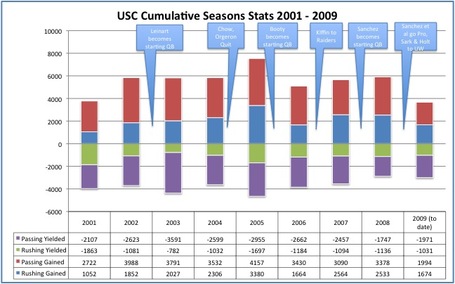 Looking at this, I was struck by several things:

The points totals are pretty much in the same vein:

It's mildly interesting that the copious yardage given up by the defense in 2005 didn't translate into more points against USC. The total points scored against USC in 2008 borders on the absurd, the total is so small. And, again, the team is on track to beat 2001 but not by much.

About all that I'm willing to conclude from this is that much like selling gasoline at $4 per gallon established how much gas has to cost before people drive less, the 2009 season has proved how much you have to subtract in order to slow down USC's football team. For all that we've been talking about whether or not the rest of the conference has figured out Pete Carroll's schtick, especially on offense*, we can't ignore the combined effect of coaching and player changes - especially the latter. We might not even learn where the causes are next year, depending on who comes back on offense. It also suggests that unless Bates somehow manages to make the offense completely implode and also takes to running around naked and fondling the wives of major donors, there's not that much point in replacing him - we'd be just as likely to find ourselves enjoying another subpar year unless a freaking genius were to be brought in.