Stumbled upon this. For thos who don't know, The OC stands for Outta Control. It is Carroll's nickname - http://usc.rivals.com/content.asp?CID=886458

The first gem is here: 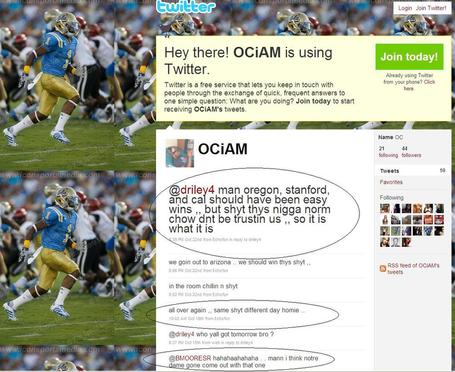 So if my translator interpreted this correctly:

2) Randall is not happy with him

4) Same "shyt" (losing?) is getting tiresome for RC

5) Like every Bruin, he was paying more attention to USC - ND game than UCLA game

6) He is whining about this to Ditrich Riley, who probably won't go to UCLA now 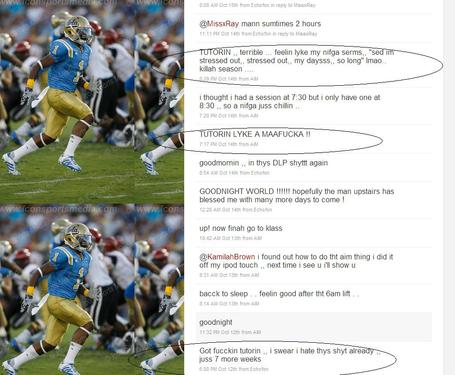 But wait, I thought they were all Rhodes scholars in waiting, or at least that's what Mushroom told me...

UPDATE: Looks like RC is not getting any punishment for that "shyt". Just like Nikola Dragovic (or whoever it was), it was just a misunderstanding. From UCLA blog

After a meeting between freshman wideout Randall Carroll and offensive coordinator Norm Chow about the contents of a somewhat controversial Twitter post by Carroll to St. Francis of La Canada recruit Deitrich Riley, Neuheisel said that Carroll would not be punished.

This, after redshirt freshman cornerback Aaron Hester expressed his frustration about the handling of his return from a broken leg.

"In the midst of a four-game losing streak, there's gonna be frustration," Neuheisel said. "That's a natural byproduct. What we have to do is channel that frustration in a positive way. With respect to Aaron Hester, certainly he understands that coming off a broken leg we can't just rush him into the starting lineup. Maybe on that particular day, he didn't understand. If communication needed to be more thorough, I'll certainly take the responsibility.

"With respect to Randall, I think it's just an oversight with respect to the technology. I don't think it was intended for a public forum. He and Norm have talked and cleared the air."

UPDATE 2: Looks like the Bruin team is united and buying "Coach" RN's philosophy... NOT!!!

Here is another twitter gem from Chrstian Ramirez (yeah yeah I know about Gable, but he never tweeted the whole world about the injustice). Funny "shyt" 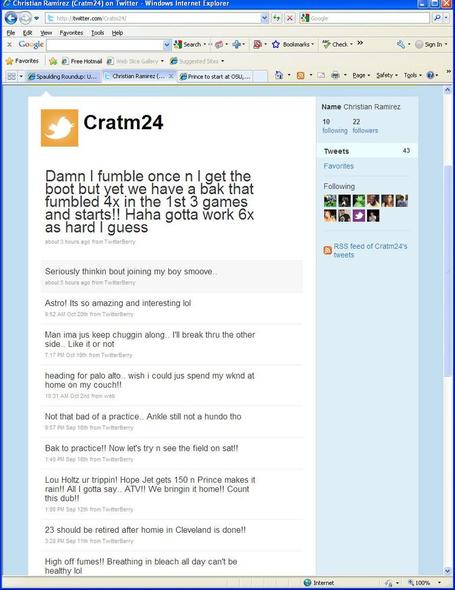