Check out this Awesome Pic from USC RipsIt.com of Stafon in the hospital! 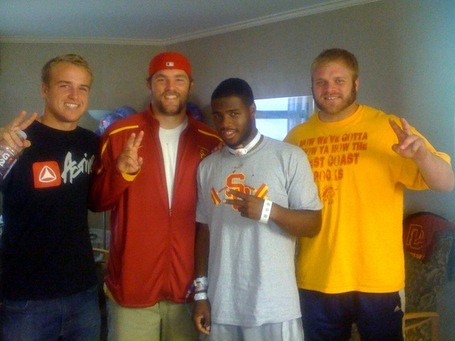 "In his hospital room this morning, Stafon Johnson smiles and flashes "fight on" alongside (from left to right) quarterback Matt Barkley, offensive lineman Alex Parsons and offensive lineman Jeff Byers. Johnson, who underwent throat surgery on Sept. 28, has been welcoming teammates and coaches more and more by the day as his condition continues to steadily improve." (Photo courtesy of Kim Mallory, Johnson's mother)

USC tailback Stafon Johnson is expected to be discharged from a Los Angeles hospital Wednesday morning, the school announced.

Johnson has been hospitalized since Sept. 28, when he suffered severe damage to his throat and voice box in a weightlifting accident.

Johnson, his mother and his surgeon briefly will address the media, although Johnson is restricted from talking, per doctor’s orders.

Check out the sticker that players will have on their Helmets this weekend also over at RipsIt.