Coming into this game I honestly thought it would be just short of imposiible for USC to win this game. ASU has five players who shoot over 35% from beyond the arc, plays a very stingy zone defense, and James Harden is one of the best players in the country and a legitimate game changer. Because of the Sun Devils style of play, I knew going into the Galen Center that their team was basically custom built to take advantage of SC's weaknesses as the Trojans would have to improve on their previously mentioned mediocre perimeter defense and that the team would be forced to shoot early and often thanks to the zone defense that basically clogs the middle and forces the other team to shoot. All in all, a recipe for disaster. 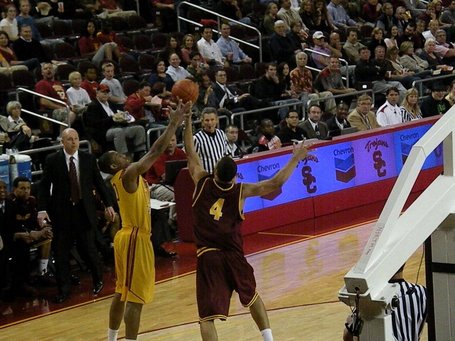 And really, that is exactly how the game began. At one point the team was an astounding 1 for 9 from the field while the defensive side was giving up three after three. In fact, the story of the first half could really be summed up in this picture: 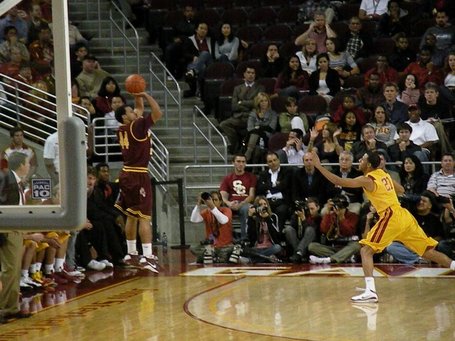 I do have to give credit where credit is due though. It is true true that the defense did a good job on the interior, and the team's other star, Jeff Pendergraph, was basically kept in check. And I don't know how many people know this, but according to stats guru Ken Pomeroy Arizona State was (and I emphasize the was) the #1 team in the country in offensive efficiency, just ahead of of North Carolina. But regardless of the overall defensive performance, the tremendous advantage in outside shooting for ASU and the complete and utter lack of offense on our side of the court made things look pretty bleak for the Trojans.

It may be a cliche, but whatever Floyd did in the locker room during half time, if they could bottle it I could be a very wealthy man. USC came right out of the gates, and in what seemed like a blink of an eye closed the game to a 2 point lead on a 7-2 run to begin the second half. USC also tightened the screws on defense, and suddenly those open looks were a lot harder to come by. Then the miracle of miracles happened, Dwight Lewis, who had been held out of the starting lineup, hit an absolutely electrifying clutch three pointer to put SC in the lead. All the while super star James Harden had failed to score even a single point. 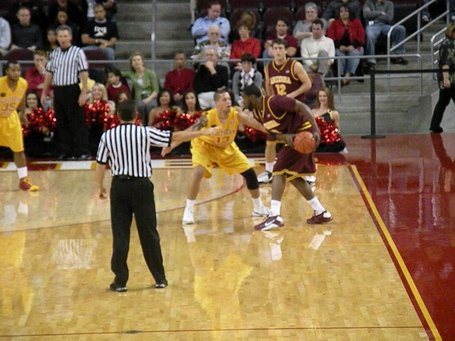 Harden would actually finish the night with four points, and nothing he seemed to do really worked. For a while the teams traded baskets, but eventually the Trojans poot the foot on the pedal and slammed the door shut. Yes, the offensive performance in the second half was so good I'm using mismatched metaphors. I even thought during half time that USC would have to score about 40 to win the game, and I just couldn't even envision how that could happen with that miserable 19 point first half. And they had 42... 42! Just when you think you have this team figured out... 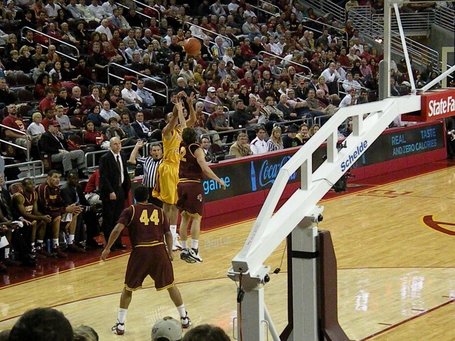 Before I wrap this up, a few players deserve a shout out. Daniel Hackett did not have the greatest stat sheet, but he put on a defensive clinic against Harden. Not only was he agressive and excellent in his execution, but Hackett also got into his head and got the POY candidate to force a lot of things on the offensive side. Dwight Lewis also asserted himself coming off of the bench, pouring in 18 points on 5 of 8 three point shooting. Derozan though has really stepped up and shown why he was considered such an elite prospect coming out of high school. The McDonalds All-American finished with 22 points (19 in the 2nd half), 8 rebounds, 3 steals, and 2 assists.. Finally, the student section was absolutely nuts. Chants of "zero points" rang out when Harden stepped to the line for his free throws, and Derek Glasser, who seemed to get in a fight with the Trojan players on just about every possesion, got the full treatment (including an entertaining "12's a b****" chant). All that is left to do now is ride this momentum and steamroller Arizona!

FIGHT ON and BEAT THE WILDCATS!