Vidal Hazelton And The Ethics Of Transfer Restrictions

Share All sharing options for: Vidal Hazelton And The Ethics Of Transfer Restrictions 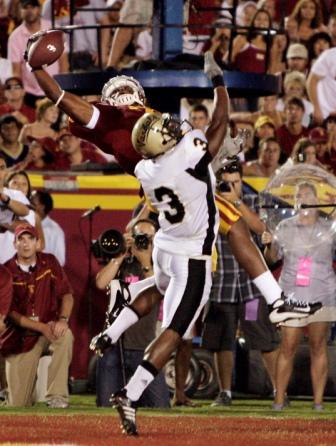 Paragon noted this in a FanPost a few days ago, but I thought it merited further discussion: Scott Wolf of the L.A. Daily News reported that USC, in exchange for releasing wide receiver Vidal Hazelton from his scholarship, has restricted where he can transfer: he can't go to another Pac-10 school or Notre Dame, which seems appropriate because the Trojans always play those teams every year. Part of Hazelton's reasons for transferring involve being closer to his family on the East Coast, so it's probably easy to say that Hazelton wasn't even considering any of these institutions to begin with.

This probably wouldn't even be noteworthy if there hadn't been a more obnoxious and harsh example set down by the University of Miami with quarterback Robert Marve prior to the Emerald Bowl: originally, Marve had been restricted from going to any school in the ACC, SEC, or in the state of Florida -- which screwed the pooch, because the reason he was transferring was to be closer to his parents, who had various personal issues. (Eventually, these restrictions were lessened to Florida, LSU, and Tennessee, along with the rest of hte ACC.)

This prompted Every Day Should Be Saturday's Orson Swindle to dub Hazelton as getting the "Marve Treatment," as he stated that where a transfer goes in D-IA shouldn't be subject to restriction; that it reeks too much of treating players as cattle.

Even though Hazelton is in no danger of going to a Pac-10 school or ND, by my estimation, Pete Carroll, or any other coach, seems to be well within some rights to request that a transfer not attend an in-state rival or within a conference (and I am highly sensitive to the cattle argument.) The problem is kind of two-fold with the nature of recruiting: you are expecting 18-year old kids to make solid decisons about their future, and we are dealing with teenagers. That said, these young men and women who sign athletic scholarships (along with their parents, if underage) have signed something binding, and you can't just throw that out the window. In exchange for a free education, you've made an obligation to the university that's paying for it.

There's also the double standard of coaches being able to drop everything and leave a program for a better job (if the buyout can be handled, of course) while transfers have to wait a year. This can't be helped, in a sense. If students play a couple years at a D-IA school, then decide to switch to replace a valued player in a bigger, more successful program....well, you can see where that's headed.

Hazelton is merely the latest case to come to our attention, but what would you do if you could alter the NCAA's transfer rules? Would you leave them in place or make modifications?