More Honors For USC Defenders; Is Mays Staying Or Going?

Share All sharing options for: More Honors For USC Defenders; Is Mays Staying Or Going? 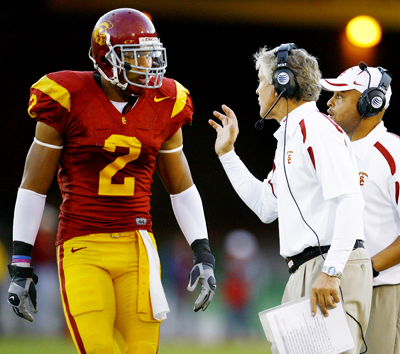 Naturally, congrats to the guys on making their names and impacts felt on the best-of lists this year.

The real question on minds after the Rose Bowl, of course, is whether Mays will be sticking around for another year or joining Maualuga and Cushing in their goals of playing on Sundays next season.

Love it if Mays stayed, but if he's predicted as a high first round pick, he's got to make a run for the draft. There are too many teams in the draft that could use secondary help in the NFL, and 2009 could possibly be the last season with the rookie scale for first-rounders being a crazy amount of jack. If you didn't know, the owners have dropped out of the collective bargaining agreement come 2011 with the NFLPA, and one of the things the union might be willing to concede on is the guaranteed contracts for rookies

There are plenty of instances in which top draft picks are making more in guaranteed money off being lottery guys or high-first rounders than free agents who feel they've earned the payday. It's gotten to the point where front offices are looking to trade out of a lottery pick more often than not in order to save themselves between $10-15 million on a first rounder, or at least get more picks for that money rather than throwing it into one high-profile player's guaranteed salary.

If Mays stays, I'll be pleasantly surprised. Look for him and plenty of other juniors who rate well with the scouts that are hired to evaluate position to make the leap even if they could actually use a final year of seasoning.

(By contrast, I think Stafon Johnson will be sticking around, judging by the way most NFL teams are avoiding anything less than the sure thing star RBs in the higher reaches of the first round. There were five taken in the 2008 first round, only Darren McFadden was a lottery pick. Jonathan Stewart went 13 to Carolina; Felix Jones, Rashard Mendenhall, and Chris Johnson went 22-24. Given the brutal nature and short shelf life of RBs, teams aren't gonna jump to give massive bonuses to less than absolute sure things right now.)