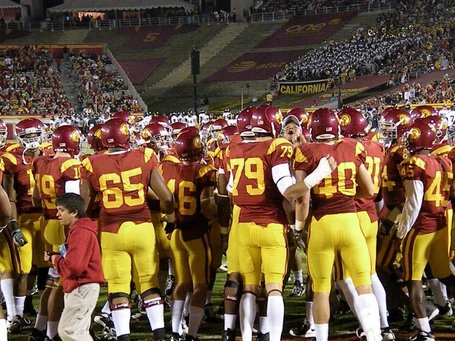 The Trojans get pumped up before the second half

More pics after the Jump! 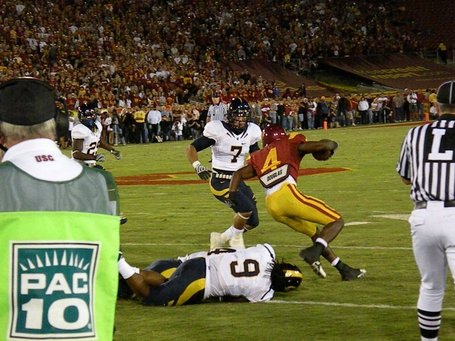 McKnight beats one defender, but runs into a wall 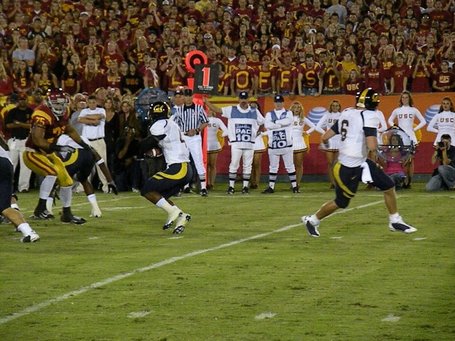 Speaking of running into walls, Nate Longshore hands off to Jahvid Best with Fili Moala already in the backfield! Also, a bunch of shirtless students capture the state of the college football nation (PLAYOFFS?) 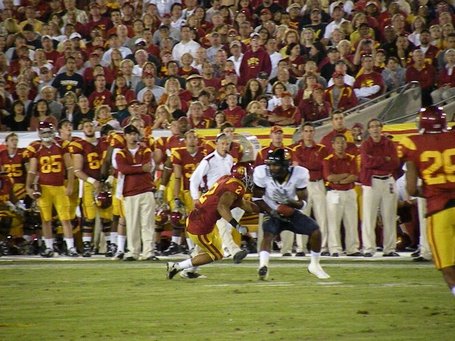 Nyan Boateng pulls down the reception just in time before getting rocked by Taylor Mays. 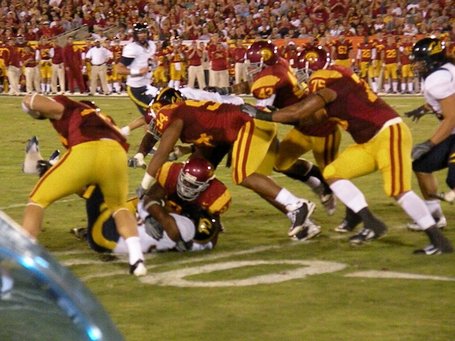 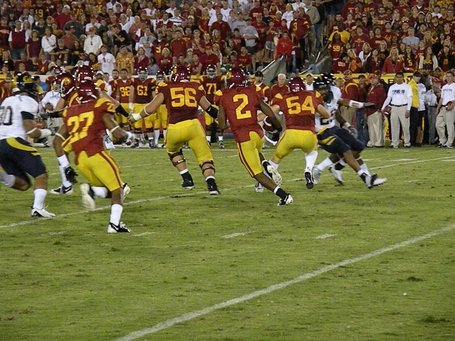 CJ Gable gets about 5 blockers on this run, and with that kind of protection even I could have run for a first down... well I can dream right? 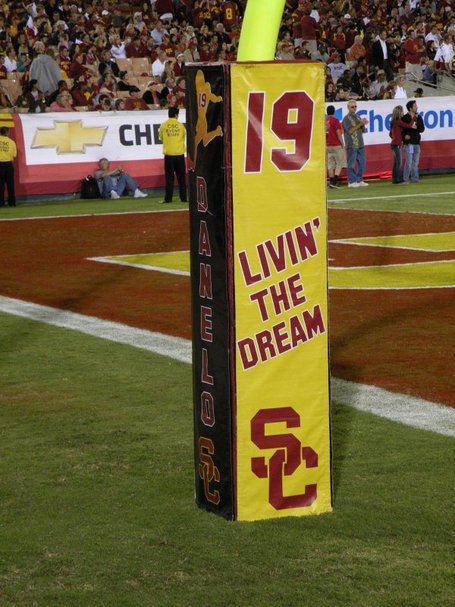 I had never noticed these on the goal post before, and I saw many of our special teams guys hit the post as they ran by. One even stopped and said a little prayer. 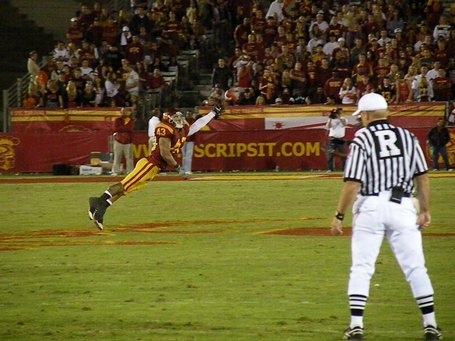 Kaluka Maiava this close to an INT 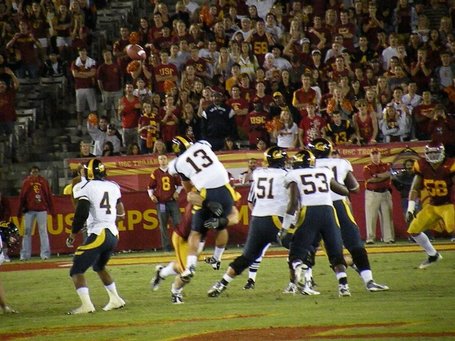 Brian Cushing absolutely drills Kevin Riley just as the pass is released. The Cal QBs were under tremendous pressure all night. 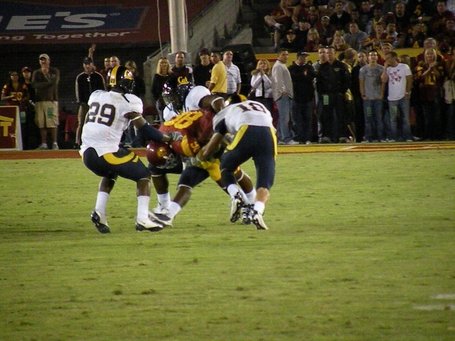 Anthony McCoy was carried one defender about three yards before two more players came in for the assist. 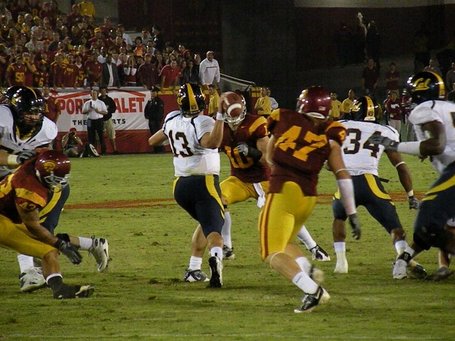 I mentioned pressure before, and it did not matter whether Longshore or Riley was in it always seemed like there were at least two Trojan Defenders in the backfield. In this pic Clay Matthews and Maiava are coming off of the edges with Cush plugging the middle. 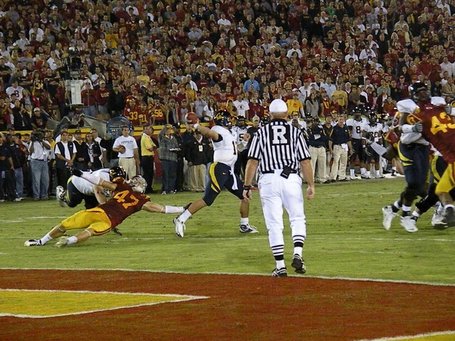 Matthews reaching out and touching somebody.

And finally, let's finish with three nice passing plays that lead to the game's final TD: 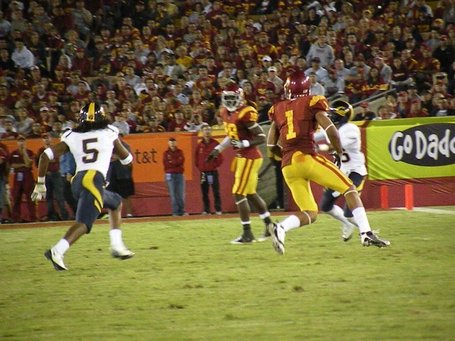 Patrick Turner streaks to the sideline for a drive extending reception on third down. 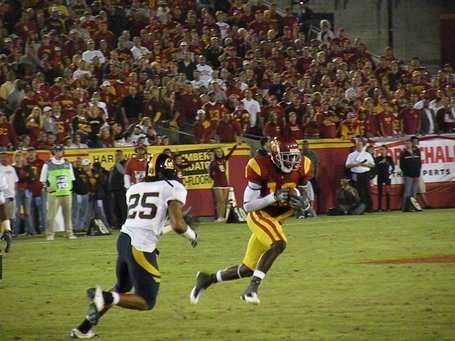 Damian Williams secures the ball as the Cal secondary collapses on him. 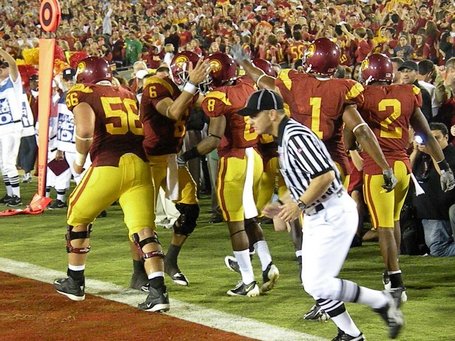 And finally, Mark Sanchez celebrates with Rojo after putting the game out of reach.

I will have a post up tomorrow about possible BCS scenarios tomorrow, and believe it or not USC still has a shot at the title game. If things pan out the way it is expected (ie every higher ranked team beats every lower ranked team) then SC will likely finish third or fourth in the BCS standings. I'll post more BCS thoughts soon.